Hrísey is known for its rich and diverse bird life. Approximately 40 species of birds nest on the island. Hrísey, though, is best known for Ptarmigans. 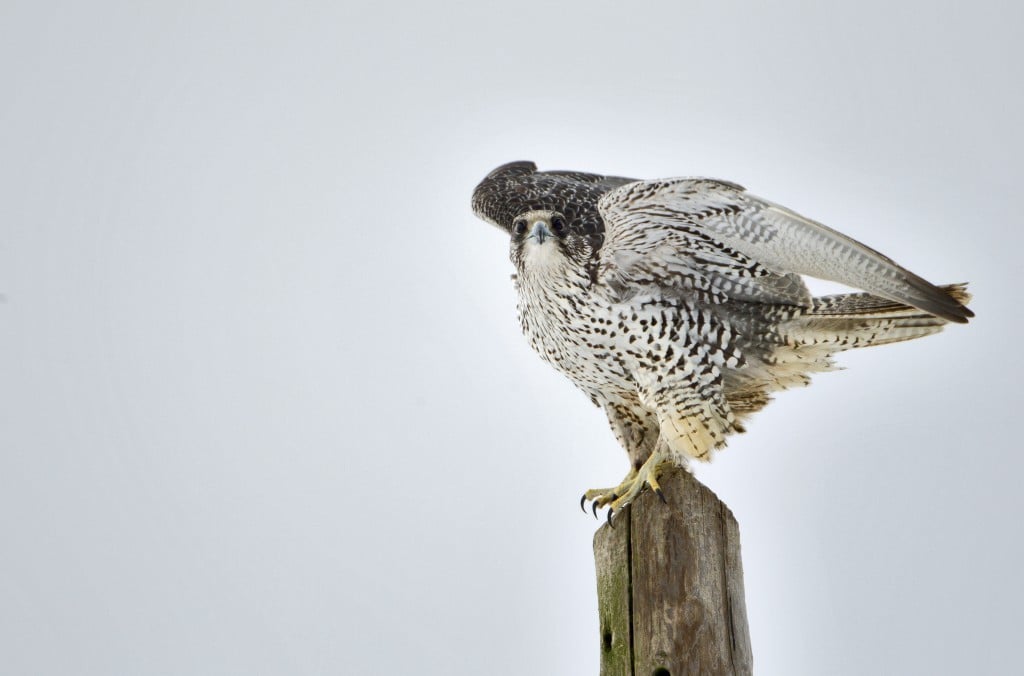 The Ptarmigan is truly a signature bird of Hrísey and adorns the island’s coat of arms. The Ptarmigan is tame, especially in the fall when it waddles in flocks through streets and gardens on the island. Research on Ptarmigans has been conducted in Hrísey for 50 years. Þorsteinn Þorsteinsson (Steini rjúpa [ptarmigan]), a native of Hrísey, has participated in the research from the beginning. The size of the breeding population is assessed early in the spring; the male birds are counted where they posture on the knolls and hillocks of their territory and defend it against other males. At that time, fighting often occurs among the males with accompanying burping sounds and feathers flying. The males stay white much longer than the females, moulting into summer camouflage up to a month later. 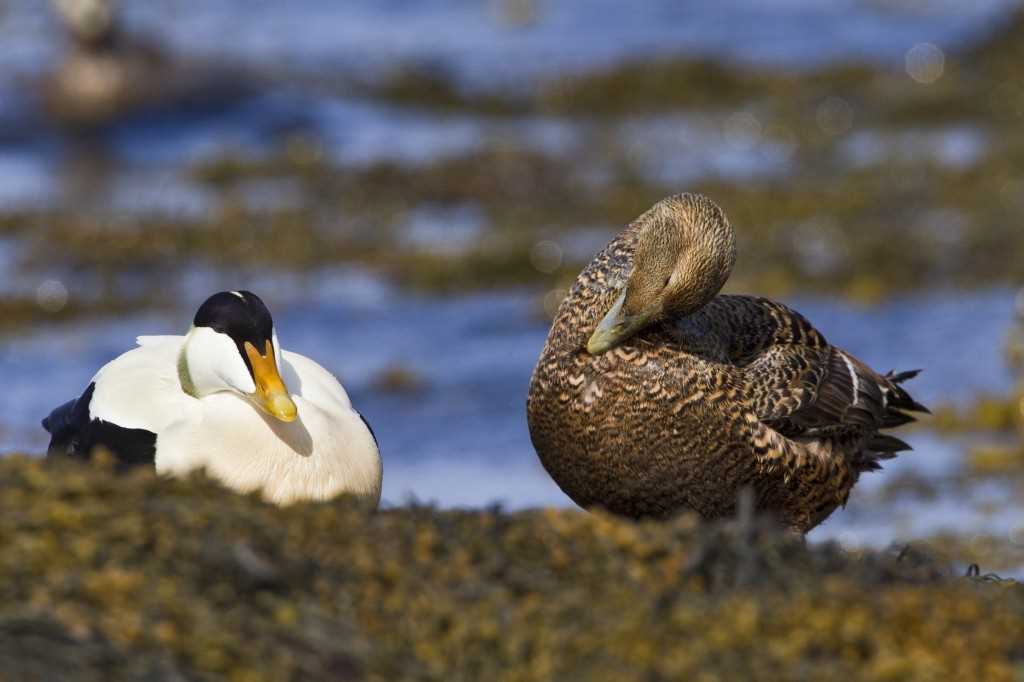 There can be a tenfold difference in the size of the Ptarmigan population between maximum and minimum years; the lowest number of males has been 30 and the highest number has been 270.

The Ptarmigans nest all over the island, even in the gardens of Hrísey inhabitants. The birds stay on the island all year round and the population is largest in late summer and autumn, when the chicks are fully fledged. During that time, the Ptarmigans stay in flocks.

The only natural enemy of the Ptarmigan in Hrísey is the Gyr Falcon, which has abundant prey on the island. During the nesting season, nearby nesting birds from the mainland go to the island in search of Ptarmigans, but in the winter, a few Gyr Falcons often stay in Hrísey. 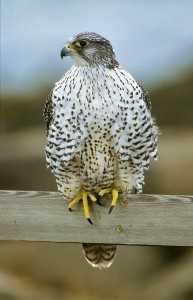 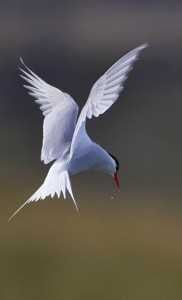 There is a large Arctic Tern colony and Common Eider colony on the island and many ducks and upland birds also nest there.
The Arctic Tern colony is believed to be one of the largest in Iceland and consists of thousands of birds. There is a large Common Eider colony in Ystabæjarland in the northern part of Hrísey on privately owned land. Other interesting nesting birds on the island are Black-tailed Godwits and Common Gulls. 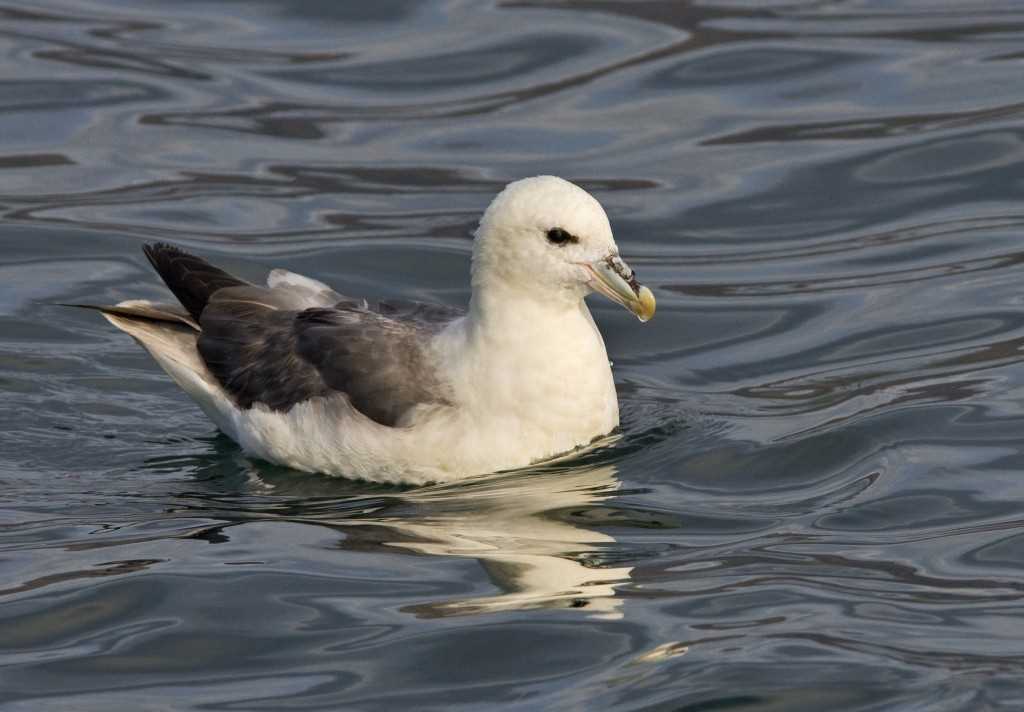 The main reasons for this unusually rich bird life are that all killing of birds and taking of eggs are banned on the island and there are no foxes, mink, mice, or rats to be found there. There are ideal conditions for several bird species due to the low heathland which covers the island and the plentiful food supply for sea birds, such as Arctic Terns, Fulmars, Black-headed Gulls, Common Gulls, and other gull species, as well as Black Guillemots; all nesting birds in Hrísey. 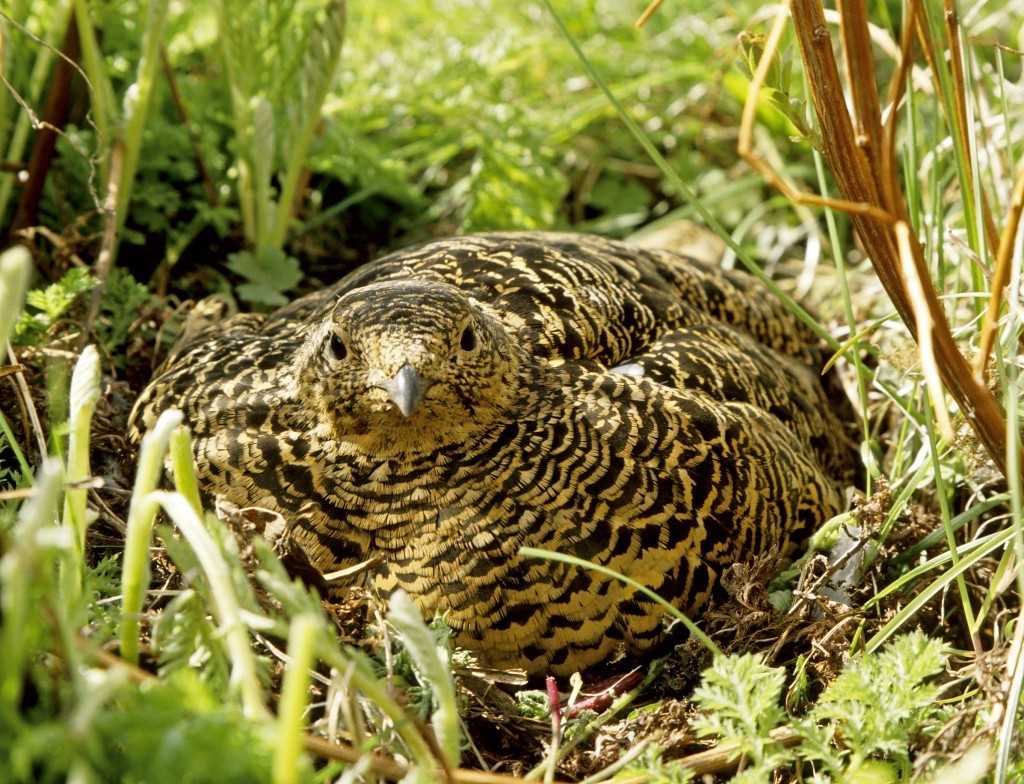 The fauna in Hrísey is diverse. Wetlands only constitute about 4% of Hrísey but are nevertheless rich and important for birds on the island, dabbling ducks like Mallards, Teals, and Wigeons, as well as waders like Godwits, Redshanks, and Snipes. Greylag Geese prefer the dry land for grazing. Pink-footed Geese have nested on the north part of the island, but it is unusual for this highland bird to nest so close to the sea. 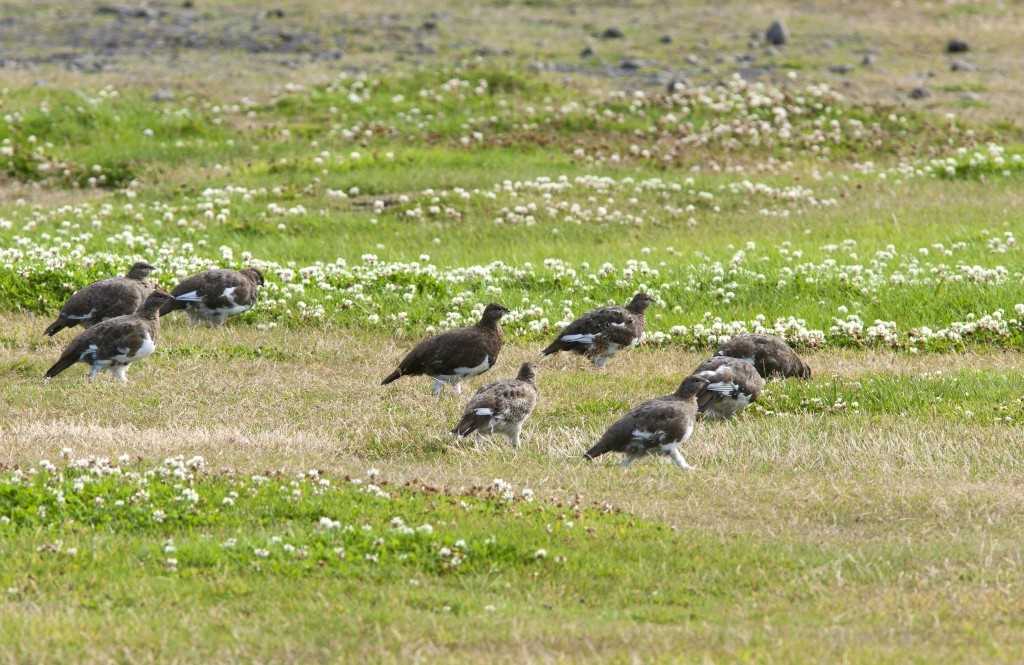 The main threats to bird life on the island are currently changes in vegetation. There was a great deal of soil erosion on the northern part of the island and lupins were planted to impede it. This was successful, but the lupins have since spread to the southern part of Hrísey, and in their wake came other large plants, angelica and sweet cicely. An effort by the Akureyri Environment Committee is currently underway to prevent the spread of these plants and it will be interesting to see the result of that work.

A forest has also been cultivated on the island to provide, for example, shelter for the inhabited area. So far, the densest Ptarmigan nesting ground is around the forest groves and even in the angelica fields. But what will the situation be like in 50 years? Upland birds will decrease in number, but those birds that can make use of the forest will remain. Ptarmigans will presumably also decline in number, as their habitat consists of moorland and open country. 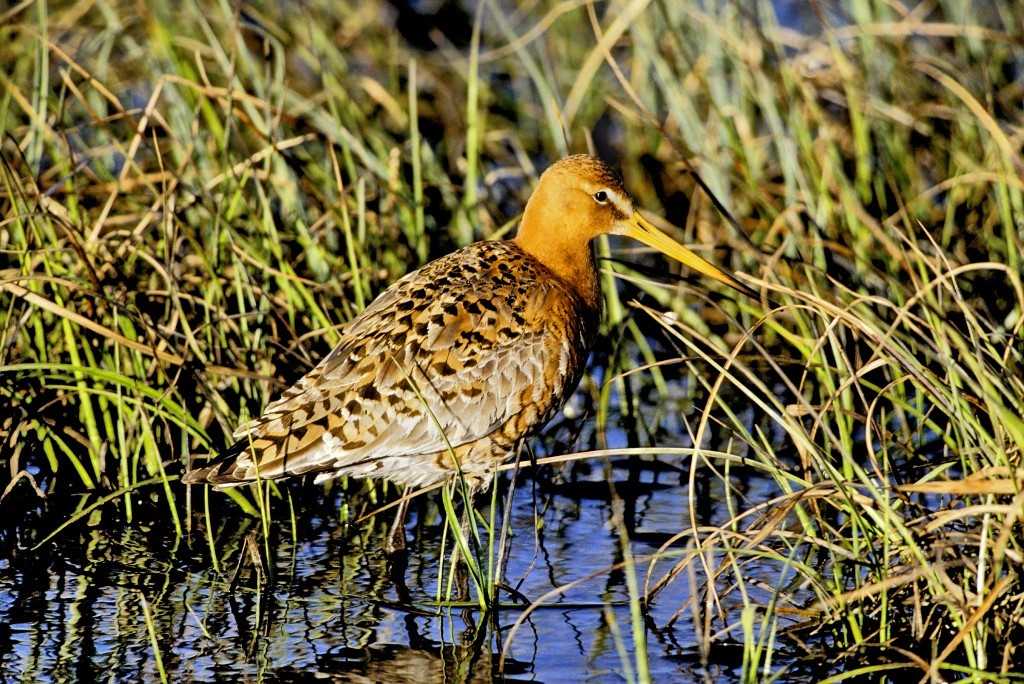 It is pleasantly different to sail on the Sævar ferry out to Hrísey and take a nice walk and look at the bird life. The Sævar sails every two hours all year around, but during winter you have to book the last ferry at 23:00 and the first ferry at 9:00 on Sunday mornings. 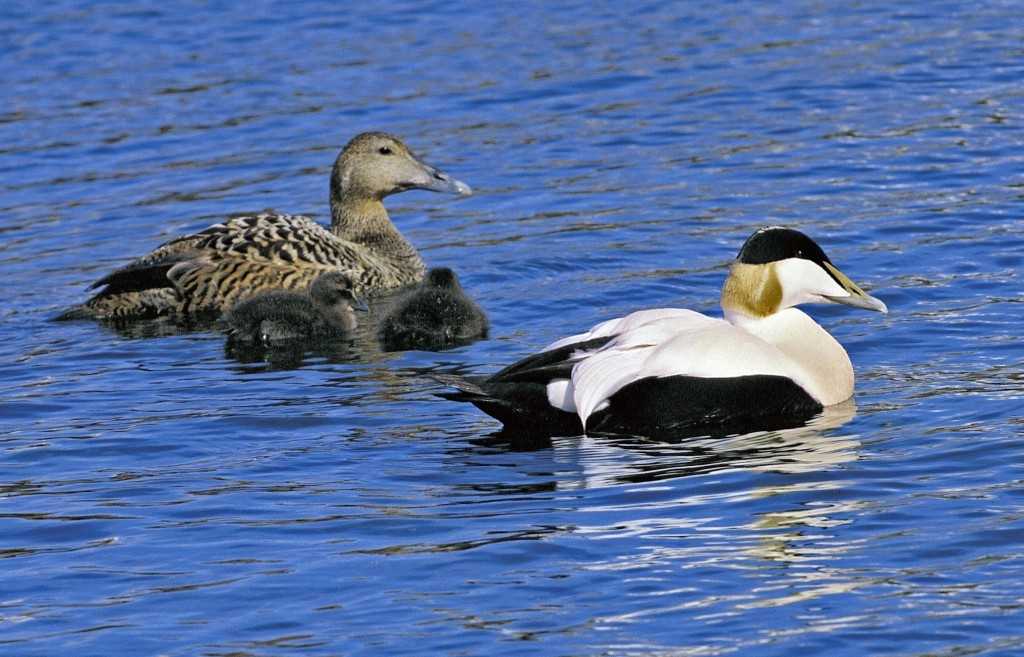 It is inspiring to stay on the island, either at the Jónatanshús, Mínukot, Wave Guesthouse or Brekka guesthouses or at the camp ground. There are three marked trails on the south island. Hrísey’s bird life is well described on many signs situated by the trails. A bird watching hut has been set up by Lambhagatjörn pond where many species of ducks and waders can be seen. The pond is on the left side when walking towards Ystibær farm or on the right side when walking towards the quarantine centre.