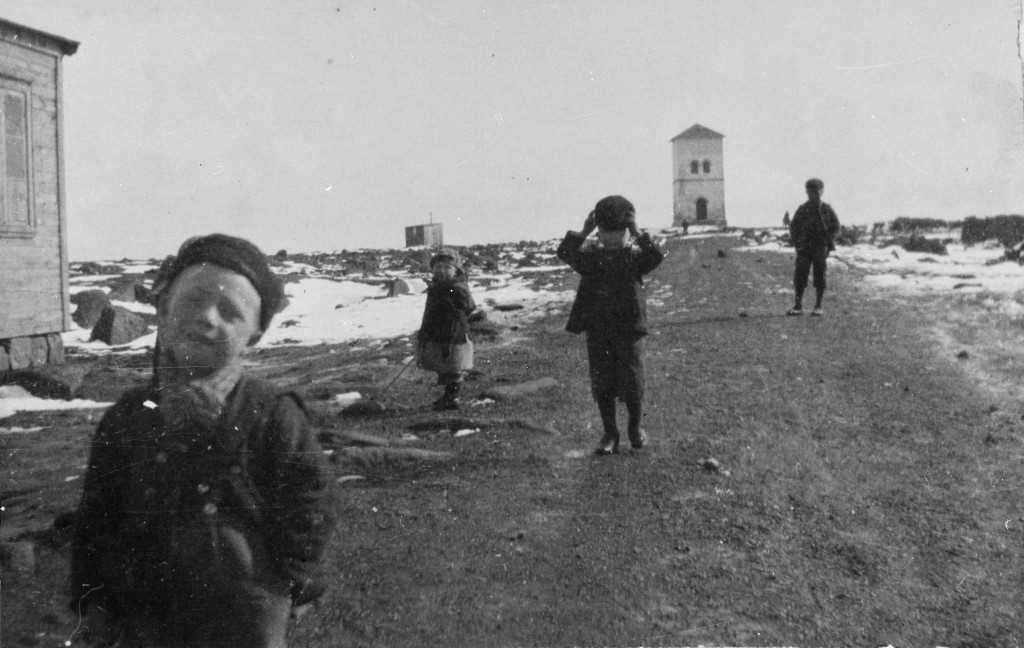 A seven-metre high tower was raised in 1834 on the top of the hill, providing splendid views over the city on “School cairn’s hill”

One of Reykjavik’s most notable landmarks is Hallgrímskirkja, which towers over the cityscape from a hill in the city’s centre. The street leading up to the church is famous for its bustling street life, diverse restaurants, art galleries, innovative design shops and quality shopping. 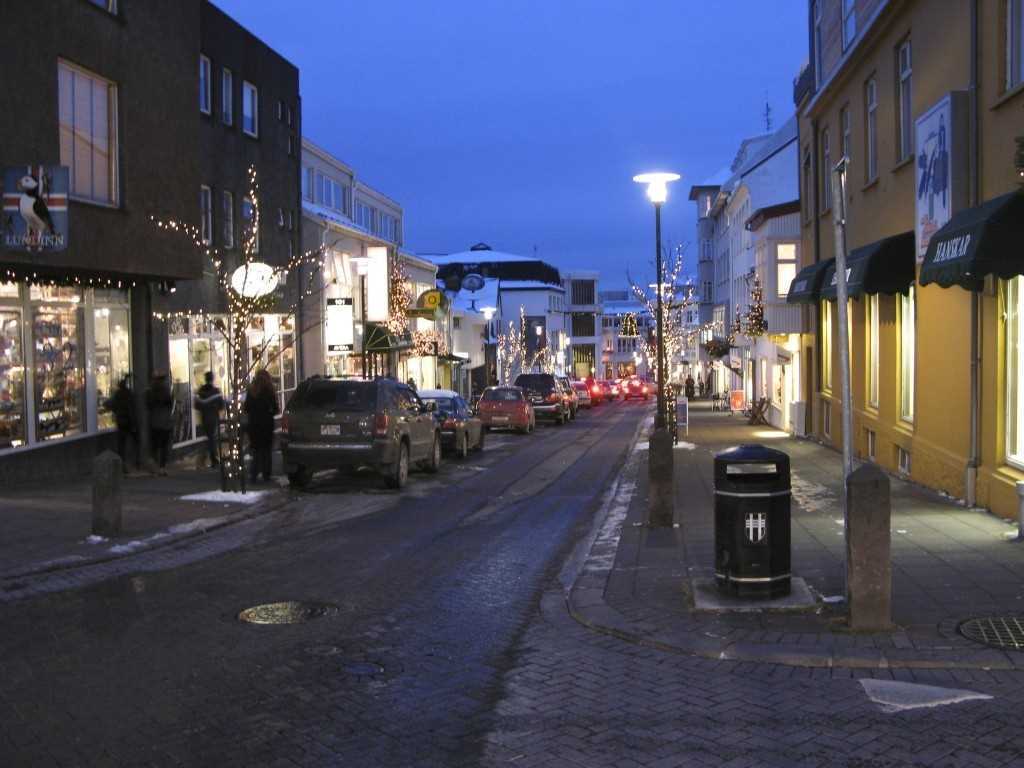 Given Reykjavik’s relatively short history, it is hard to imagine that, only two centuries ago, a group of schoolboys collected rocks and stones from the area, scaled the hill and proudly raised a cairn to honour their newly built school nearby. The year was 1793, only sevens years into Reykjavik’s official trading town status, and the hill had not yet been built upon and, in fact, was registered as a falcon reservation at the time. 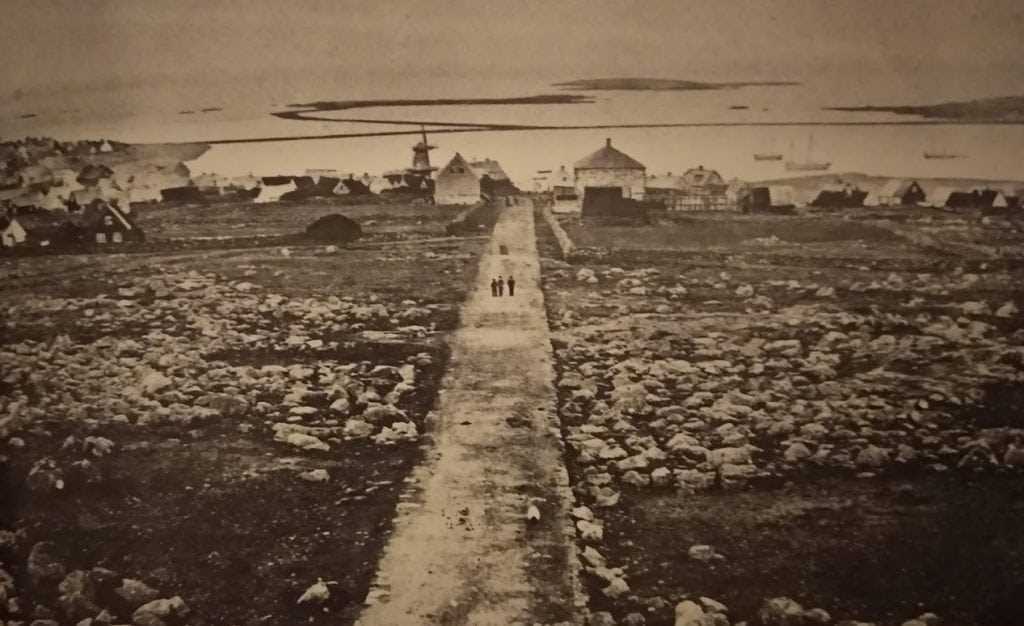 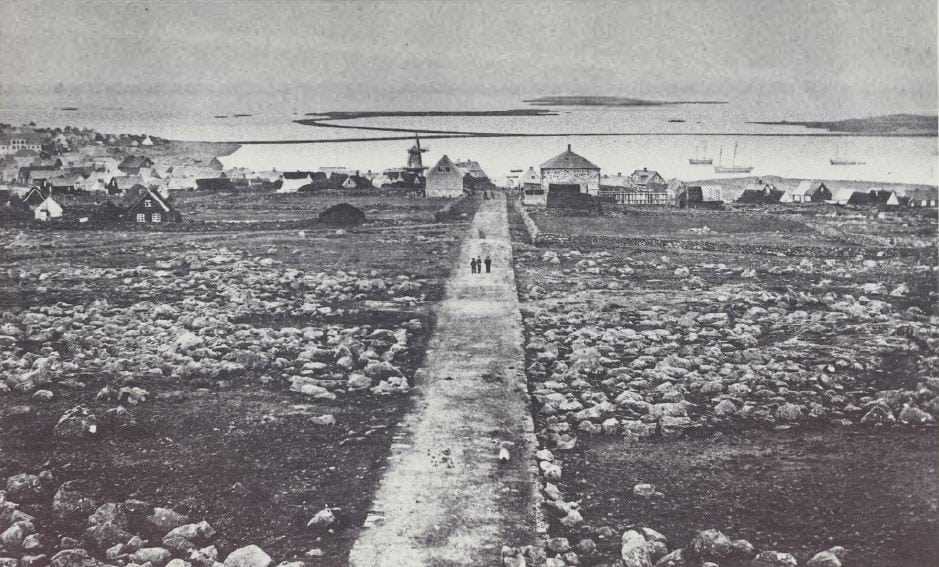 The picture above was taken in 1877 from the Skólavarða, a stone observation tower on Skólavörðuholt. It was later tom down. On this old photograph, the view is down Skólavörðustígur. In the background are the islands Hólmur, Akurey and Orfirisey, and the Orfirisey jetty. One also sees the Dutch windmill which stood at Bankastraeti near the bottom of Skólavörðustígur.

The hill was thus named Skólavörðuholt, which literally translates School cairn’s hill. The cairn didn’t prove to be a durable construction and fell into disrepair, so city officials took action. A seven-metre high tower was raised in 1834 on the top of the hill, providing splendid views over the city. The city also committed to maintain the tower and the surrounding area and thus a road leading up the hill was built. The road was given the name Skólavörðustígur and was meant as a scenic pedestrian street and therefore all traffic by horse was forbidden (also to minimize the road’s maintenance). The ban on horse traffic proved to be difficult as the hill was also used as a rock quarry for constructions in the city, especially the harbour area, which meant hauling rocks down the slope had to be done by manpower.

A man with a vision

The first buildings started rising around Skólavörðuholt in the mid-19th century, some of which are still standing and preserved by the city, including the still-used city prison. In the early 20th century, Guðjón Samúelsson, the state architect of Iceland had big plans for Skólavörðuholt as a centre of culture, education and religion. Although those ambitious plans didn’t work out as the university was given land further to the west, he did design the majestic church that stands there today.

The statue of Leif Eiriksson, the first European to discover North America, on Skólavörðuholt was a gift from the United States for Iceland’s millennium celebration of Althingi’s founding in 1930, but to make room for the generous gift, the tower on Skólavörðuholt was demolished, leaving people without a favourable view over the city. This was remedied as Samúelsson’s plans for Hallgrímskirkja, the grand church on top of Skólavörðuholt named after Iceland’s primary psalm composer, Hallgrímur Pétursson, were made into reality. He started designs in 1937 and construction started in 1945, though the church wasn’t completed until 1986 – 36 years after Samúelsson’s death.

The church has proven to be a lasting monument, as the surrounding area has changed from a rock quarry with a cairn on top into a lively and colourful neighbourhood where Reykjavik’s top chefs, designers, craft folk and artists congregate. -VAG