Birds of the Northern Breiðafjörður

Breiðafjörður is an expansive and shallow bay. It has a large area of shallow waters and greater tides than anywhere else in Iceland. It is estimated that a quarter of the country’s shoreline is located in Breiðafjörður. A great number of islands, islets and skerries can be found in the bay and its islands are thought to be infinite, though some claim that the number is approximately 3,000. The bay is one of the most important areas in the country for birds, and the islands and inner part of the bay are protected by special laws. The bird life is characterised by birds that are wholly dependent on marine life and nest in large colonies. Breiðafjörður is a stronghold for the White-tailed Eagle, and it managed to prevail there when it had almost been eradicated in Iceland during the middle of the last century. There are great numbers of Common Eider in the bay and it is the kingdom of the Glaucous Gull in Iceland. 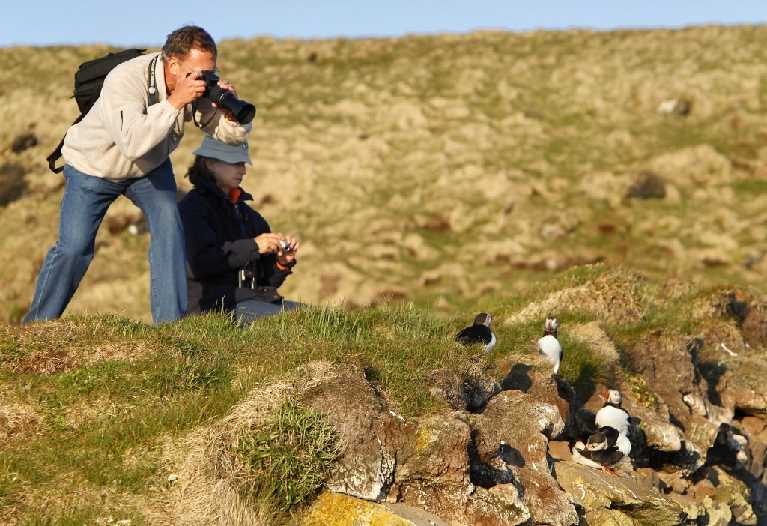 Borgarland and Reykhólar
The coastline by the northern part of Breiðafjörður is a birdwatcher’s paradise, as well as that of other nature enthusiasts. We will travel from east to west and begin our journey in Króksfjörður fjord. Between Króksfjörður and Berufjörður is the beautiful Borgarland peninsula. The landscape is adorned with ponds, marshes, and rock formations, and there are fine views in many directions. The ponds and wetlands attract diverse bird life, the flora is interesting and, in many places, marine artifacts can be found up on dry land. It was at this site that the author saw the king of Icelandic birds, the White-tailed Eagle, for the first time and indeed the odds of seeing this majestic bird are higher in the areas we travel through in this article than in most other places. 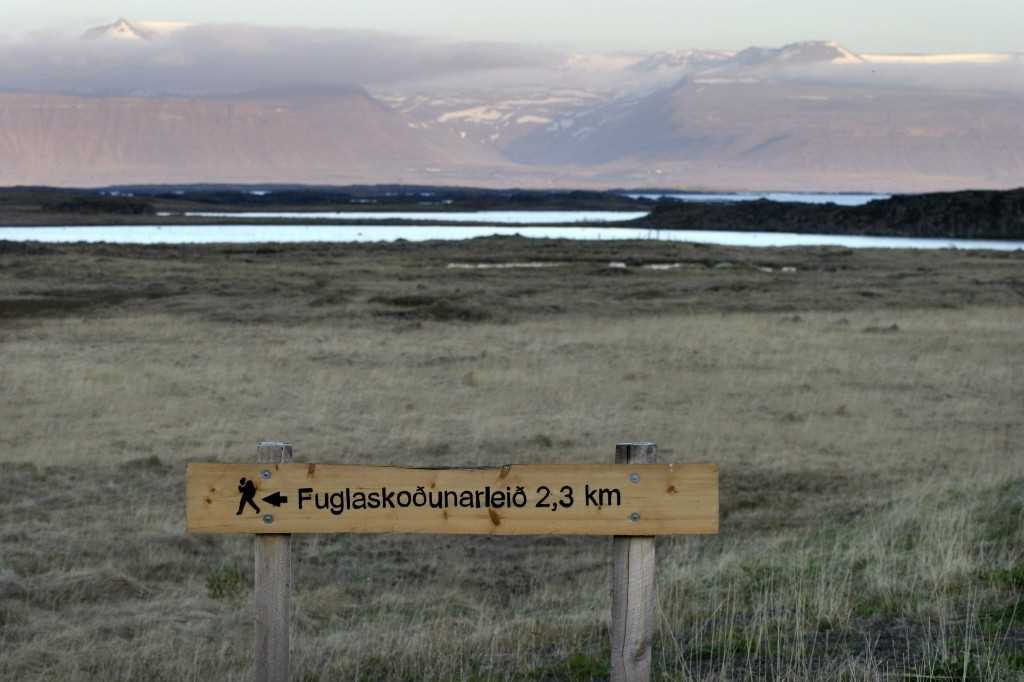 Our next stop is Reykhólar village. In the area below Reykhólar can be found vast heathland and marshland and ponds and lakes where various scarce species of bird live. Birdwatching trails have been laid from the swimming pool at Reykhólar, Grettislaug, through marshes and heaths to Langavatn and Neðravatn lakes. There is a bird watching hut by Langavatn. The nesting birds here include Horned Grebes, Red-throated Divers, Long-tailed Ducks, Black-tailed Godwits, Whimbrels, Red-necked Phalaropes and Rock Ptarmigans. 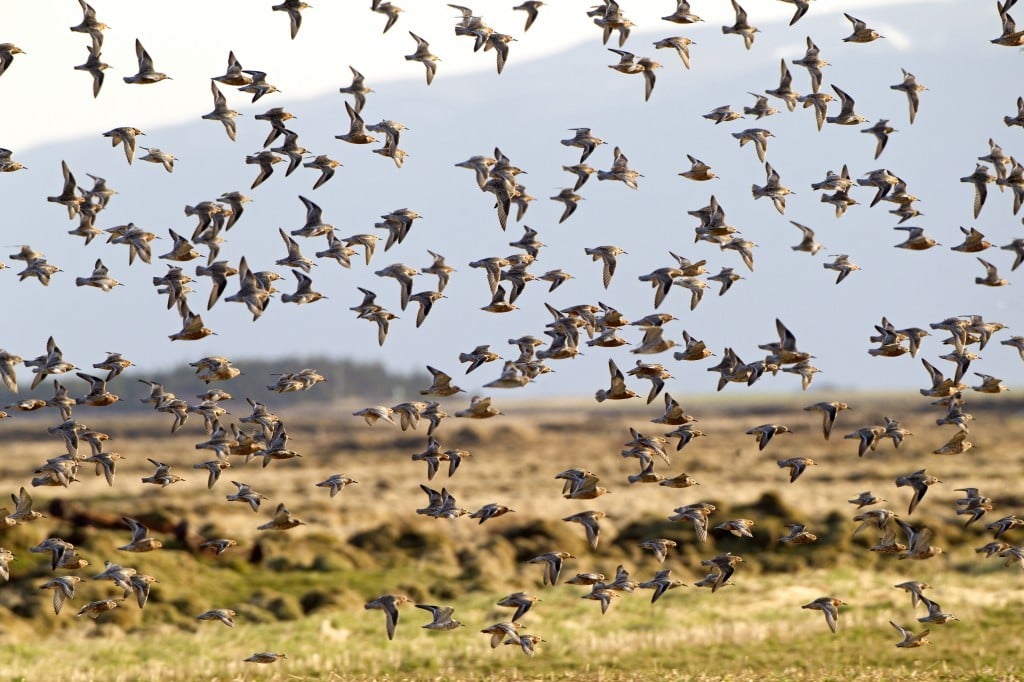 The fjords
Next, we come upon a myriad of fjords with a very diverse bird life. In the bottom of the fjords are mudflats that are revealed at low tide. Thousands of migratory birds stop at these beaches on their way between nesting sites in Greenland and the Canadian Arctic and wintering grounds in Europe and Africa. Among these birds are Brent Goose, Red Knot, Sanderling, and Ruddy Turnstone.
The Road Administration has had a tendency to dam these fjords or lay roads through the mudflats. Gilsfjörður, for example, was ruined in this manner. The Icelandic Wren sings far and wide in thickets within the fjords. This bird is an endemic subspecies which could soon become a separate species. Purple Sandpipers nest on heaths and hills between the fjords. 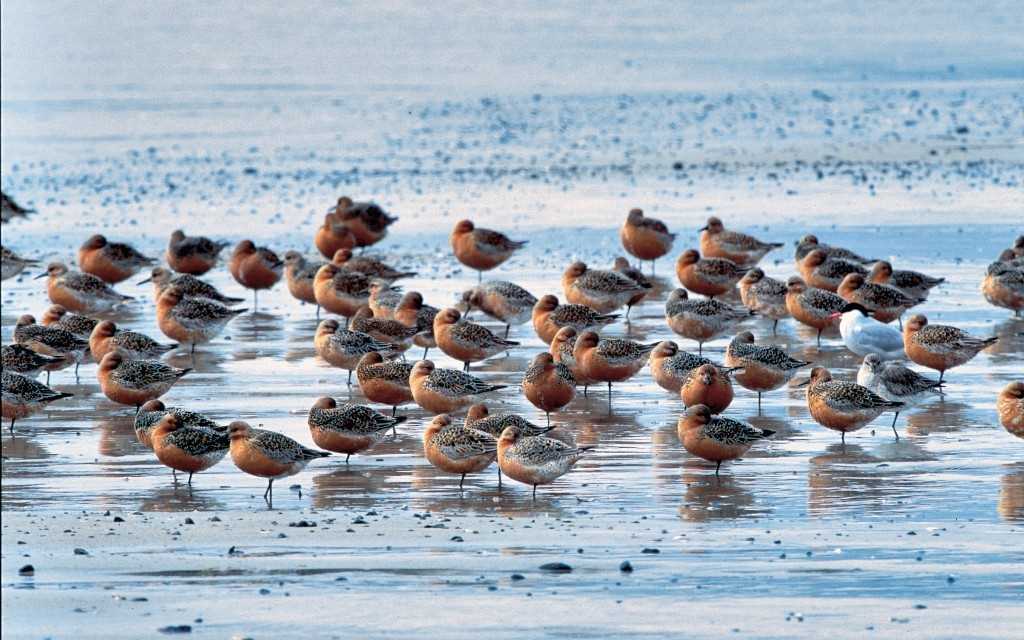 The westernmost fjord is Vatnsfjörður. The fjord is a special conservation area. Approximately twenty species of birds live in the reserve on an ongoing basis. There are large numbers of Common Eider in the fjord. Harlequin Ducks can be found on Vatnsdalsá river, from its outlet from Vatnsdalsvatn lake to the sea in spring and into the summer. These ducks can number in the dozens in May. Harlequin Ducks are also seen on the upper part of the river which runs into the lake. One pair of Great Northern Divers usually nests at Vatnsdalsvatn, and the Red-breasted Merganser also nests at the lake. White-tailed Eagles and Gyr Falcons are often out and about and nest nearby. There are some field mice, foxes, and minks in the area, but it is easier to spot the seals which often lie on the rocks by Hörgsnes peninsula. The tidal flats of Hagavaðall and Rauðisandur beach are important stops for migratory birds, and there is also a diverse nesting bird fauna in that area. 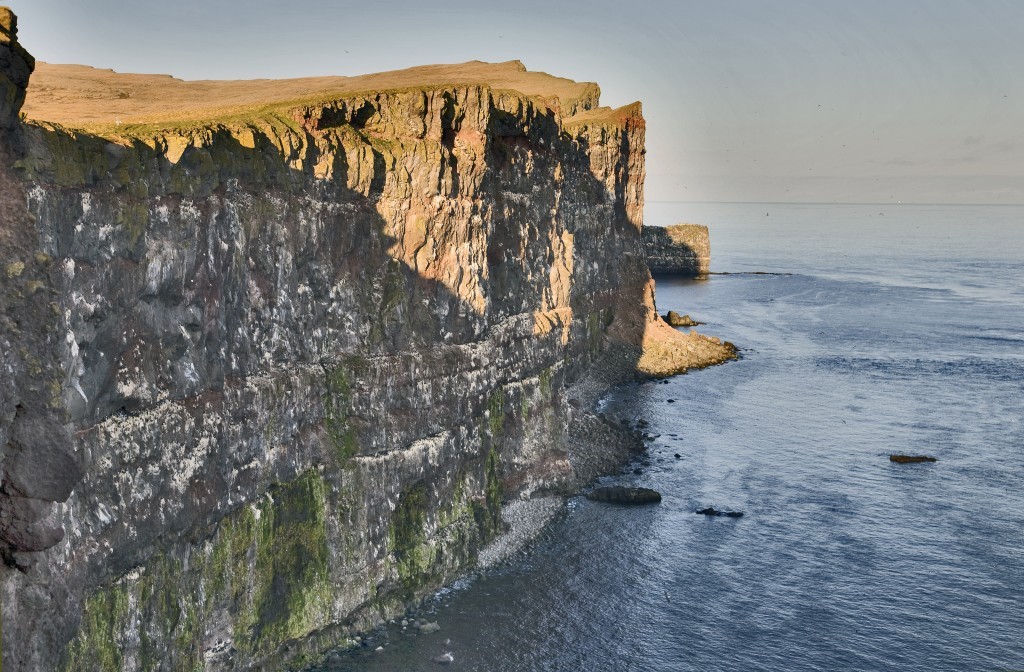 Látrabjarg
The outpost of Breiðafjörður to the north is the Látrabjarg bird cliff, the second westernmost point in Europe. It is an unforgettable experience to arrive at Bjargtangar, park by the lighthouse, and walk east along the cliff edge. Atlantic Puffins skitter on the edge, coming and going, and carrying on their domestic lives, oblivious to the people observing them close by. Nowhere can you more readily view Atlantic Puffins than at Bjargtangar, and in few places are they tamer. This is one of the best locations in the world for observing Atlantic Puffins; you can take a close-up picture of one there with a wide-angle lens. Razorbills are also found on ledges and, lower down on the cliff, Common Guillemot and Brünnich’s Guillemot nest in the tens of thousands, while Fulmars and Kittiwakes are more scattered. The largest Razorbill colony in the world is in Stórurð under Látrabjarg, well east of Barð, a cliff edge which extends to the sea and from which the county derives its name. Though not a natural cliff bird, the Black Guillemot makes its nest on rocky slopes under the cliff. The inhabitants on the cliff probably number well over two million. Under the cliff swim dignified Common Eiders, while colourful Harlequin Ducks and European Shags strut on rocks and boulders. Great Skua, Arctic Skua, and Gannets are often seen in flight. At low tide, Grey Seals lie on boulders, and whales are sometimes seen blowing or rolling by the cliff. In late evening, foxes skip to the edge and dart beneath it to get hold of a bird. 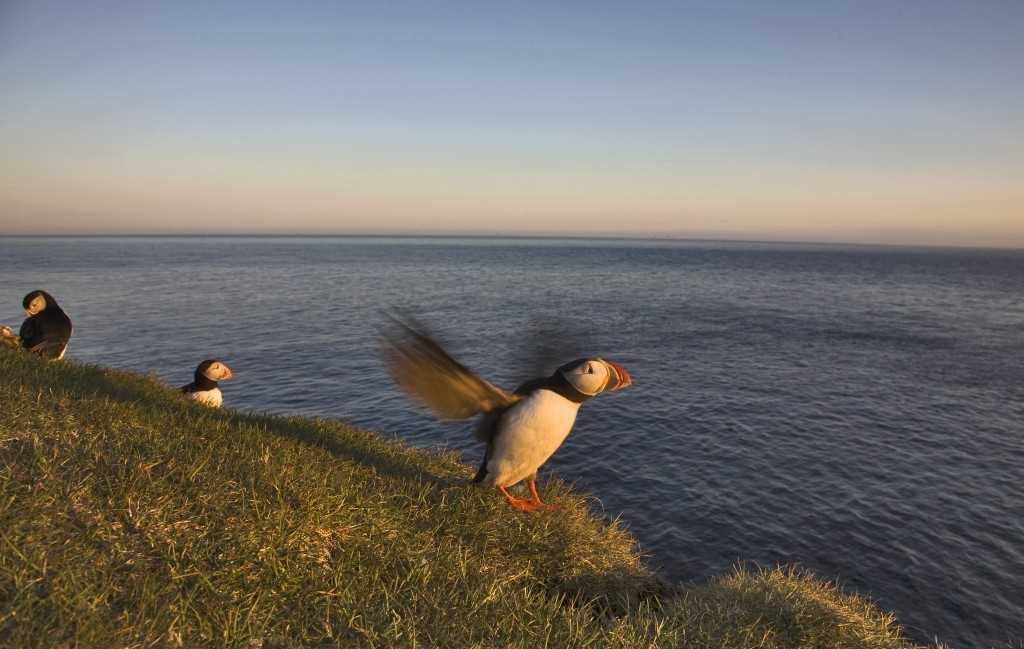 Please note that, of course, nature should be treated with the utmost respect, and birds should not be disturbed at their nest or bothered in any way.