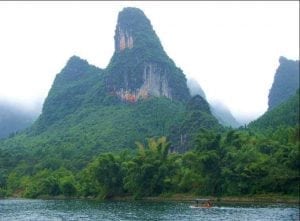 Guilin’s scenery, in the northeast of Guangxi, extends over 100 kilometers from Xin’an of the north to Yangshuo of the south. With ter-rain of limestone eroded by underwa-ter and movement of the earth’s crust, it is dotted with precipi-tous and unique mountains, and tortu-ous clean rivers with fishes. Blue moun-tain, clean water, beautiful stone, unique caves, and serene view all com-pose the beautiful picture of Guilin, which is crowned as ” Guilin’s scenery is the best in the world”. 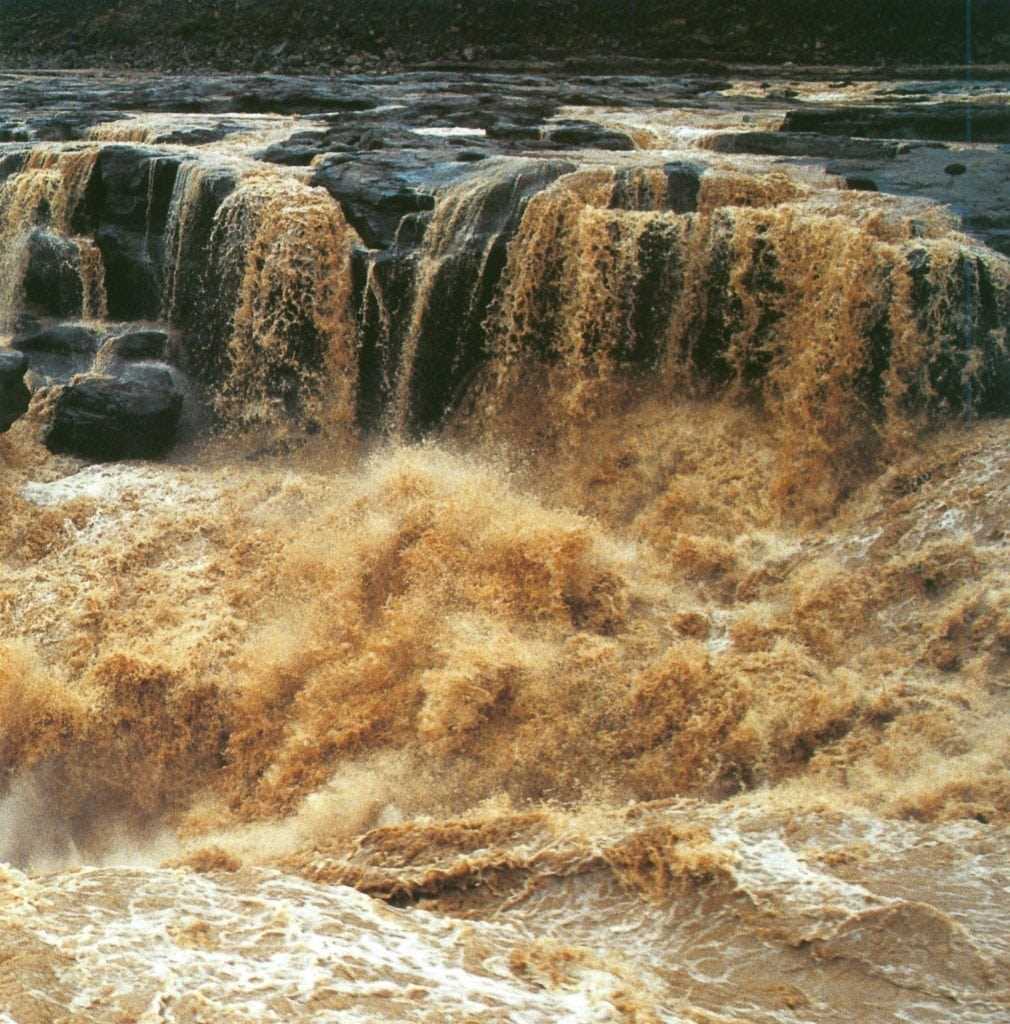 Hukou Waterfall or the Kettle Mouth Waterfall, lies in one section of the Yellow River, 25 kilome-ters southwest of Ji County of Shanxi Province, and opposite to Yichuan of Shaanxi Province. The width of riverbed here falls sharply down to 50 meters from 250. When water of the Yellow River flows to this section, which is only 30 meters wide, torrential waves and enormous sounds are produced which can be heard within a few kilometers. Therefore, the waterfall gains its name of “Kettle Mouth” for it looks like a boiling kettle.

In October 1997, Xiaolangdi Water Control Project succeeded in damming water of the Yellow River. From then on, the Yellow River was diverted and its water flows down to the lower reaches along diversion tunnel in the north side of it. 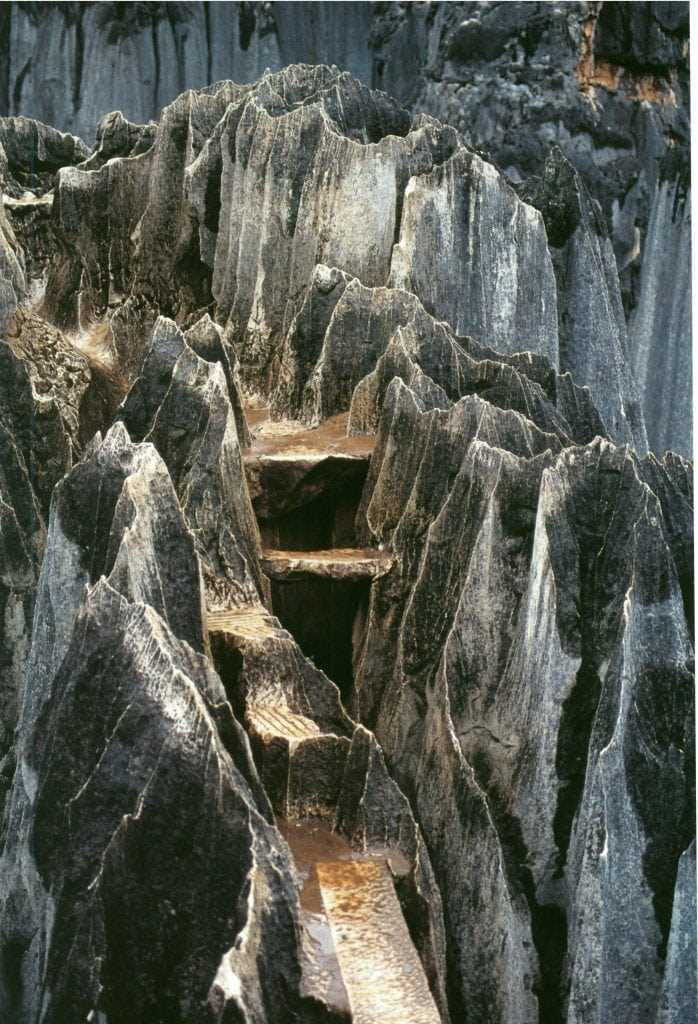 Shilin, located in Lunan of Yunnan Province, is the typical karst topography with an area of over 400 thousand mu( lmu=1/15 ha.). It has many unique mountains standing up with numerous shapes and postures. A lot of colossal gray stone mountains and pillars stand up against the blue sky, which appears to be a large patch of forest with a grand view when looking from a long distance. Therefore, it is labeled as the number one spectacular scenery in the world for its “god-made” topography.

Changbaishan Reservarion, lies in three counties–Antu, Fusong and Changbai, all located in Jilin Province, and borders with PRK on the south and southeast. Inside the Reservation is an integrated natural environment and ecosystem. It abounds in rich living things and is featured as a typical mountainous natural appearance in topography, climate, soil and distribution of wild animals. It is a typical natural complex bearing worldwide significance in relatively large Nature Reserves. 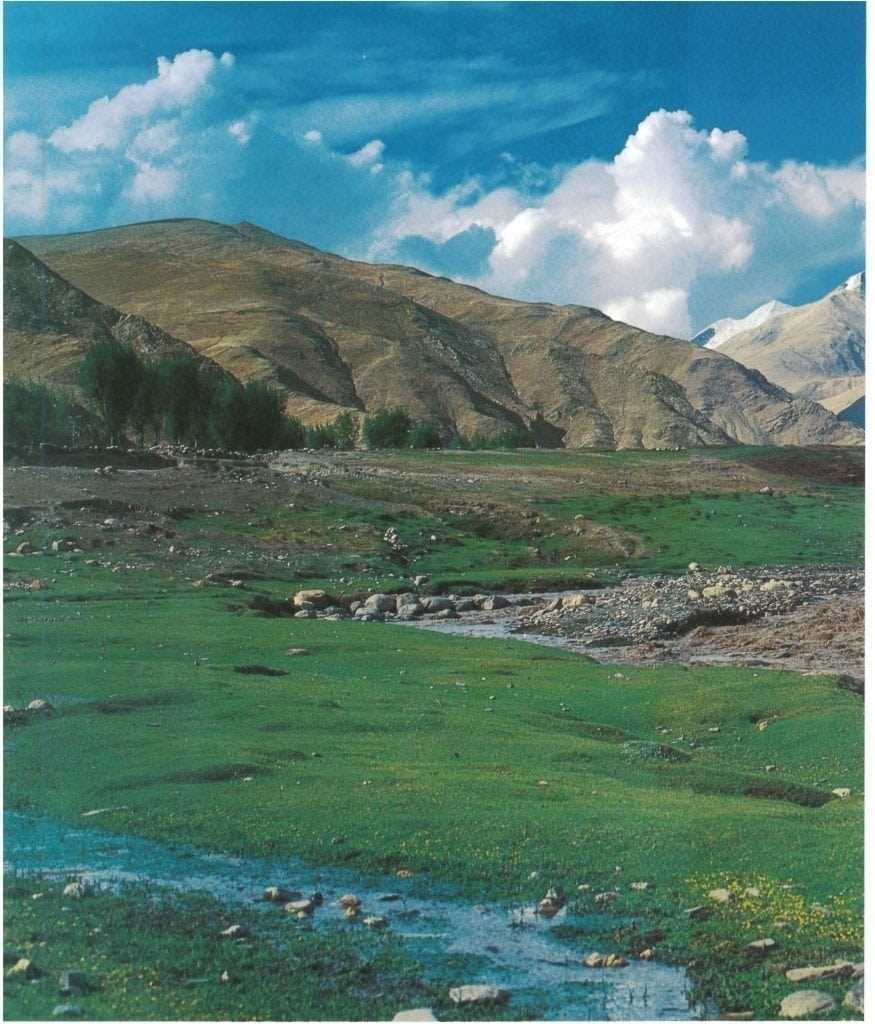 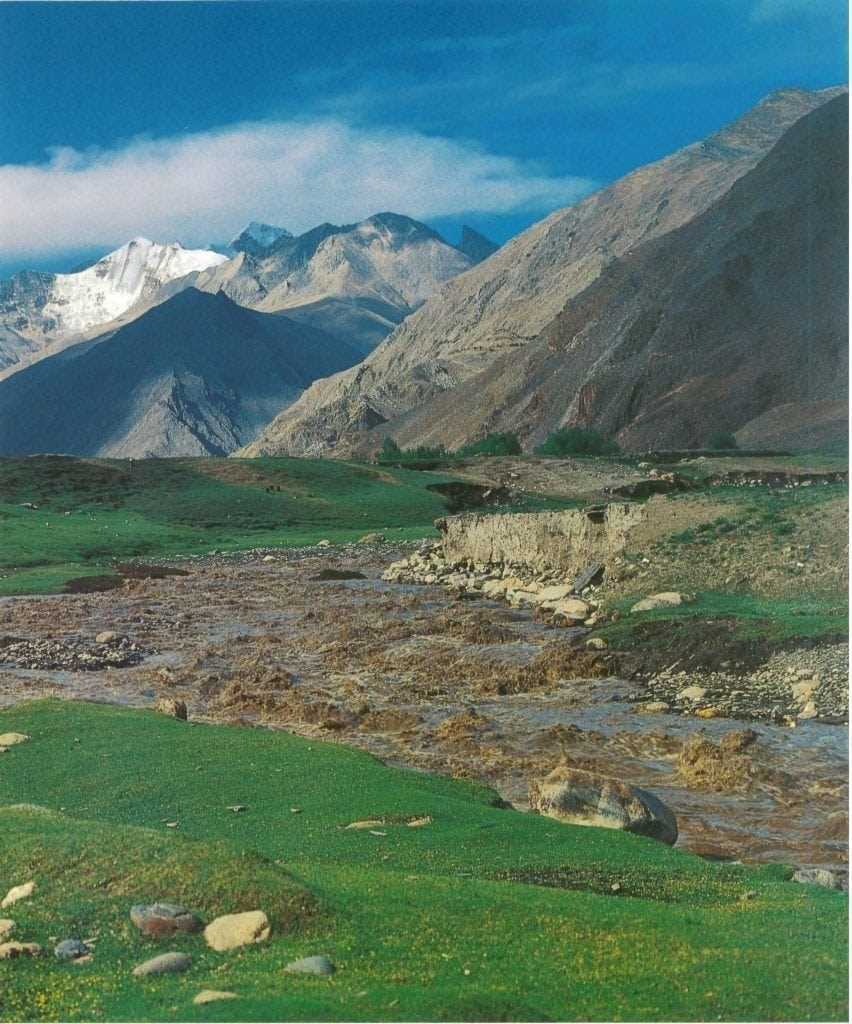 Qinghai-Xizang Plateau, lying in the southwest of China, includes Tibet, Qinghai, western part of Sichuan Province, southwestern part of Gansu Province and northwestern part of Yunna, Province, with the total area amounting to 2.5 million square kilometers and average altitude accounting for over 4,000 meters above sea level. It was formed relatively late but has the highest altitude on earth, and is known as “Roof of the World”. 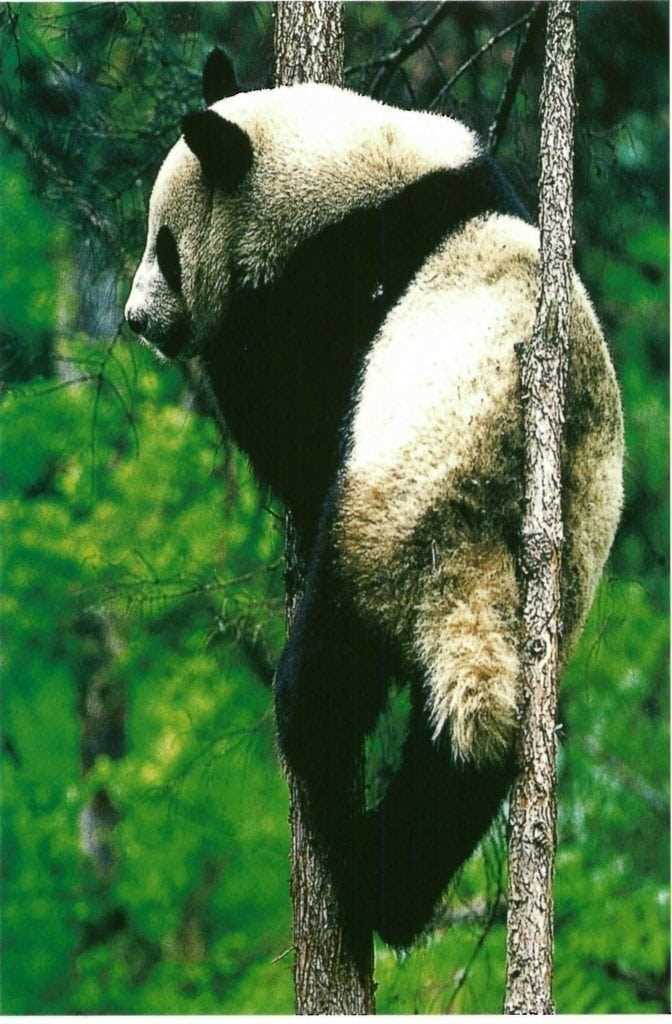 The Hulun Buir Plateau west of the Da Hinggan Ling Mountains, about 1,000 meters above sea level, has vast grasslands well suited for grazing. The beautiful scenery of the grassland and the long traditional culture and customs of the Mongolian nationality make both the grass-land tour and the distinctive local and national features of the Mongolian social customs tour attractive to tourists from both home and abroad. In the summer time, the grassland is a green world with white clouds floating through the blue sky and a gentle breeze blowing softly. Yuanyang Terraced Fields, lying in the central and southern part of Yunnan Province, is human’s masterpieces to remake mountains and rivers according to local conditions, and harmoniously integrate min into nature. Intelligence and wisdom of the working people attribute to the serene beautiful environment of this land with attractive charming. A Mount Huangshan, located in southern Anhui Province. In 1990, the United Nations Educational, Scientific and Cultural Organization (UNESCO) officially inscribed Mount Huangshan on the World Heritage List of Cultural and Natural Value. Mount Huangshan covers an area of more than 154 square kilometers, with 72 famous peaks. Lotus Flower Peak (Lianhuafeng), Bright Summit (Guangmingding) and Heavenly Capital Peak (Tiangdufeng) tower over all the others, being the three hightest and most magnificent peaks in Mount Huangshan with elevations of more than 1,800 meters (5,905 ft.). Mount Huqangshan is equally beautiful in different seasons throughout the year. As people ascend or descend the mountains, so many scenic sights meet your eyes all the way. Its legendary pine trees, grotesque rocks, sea of clouds and hot springs have won the reputation of four unique views. 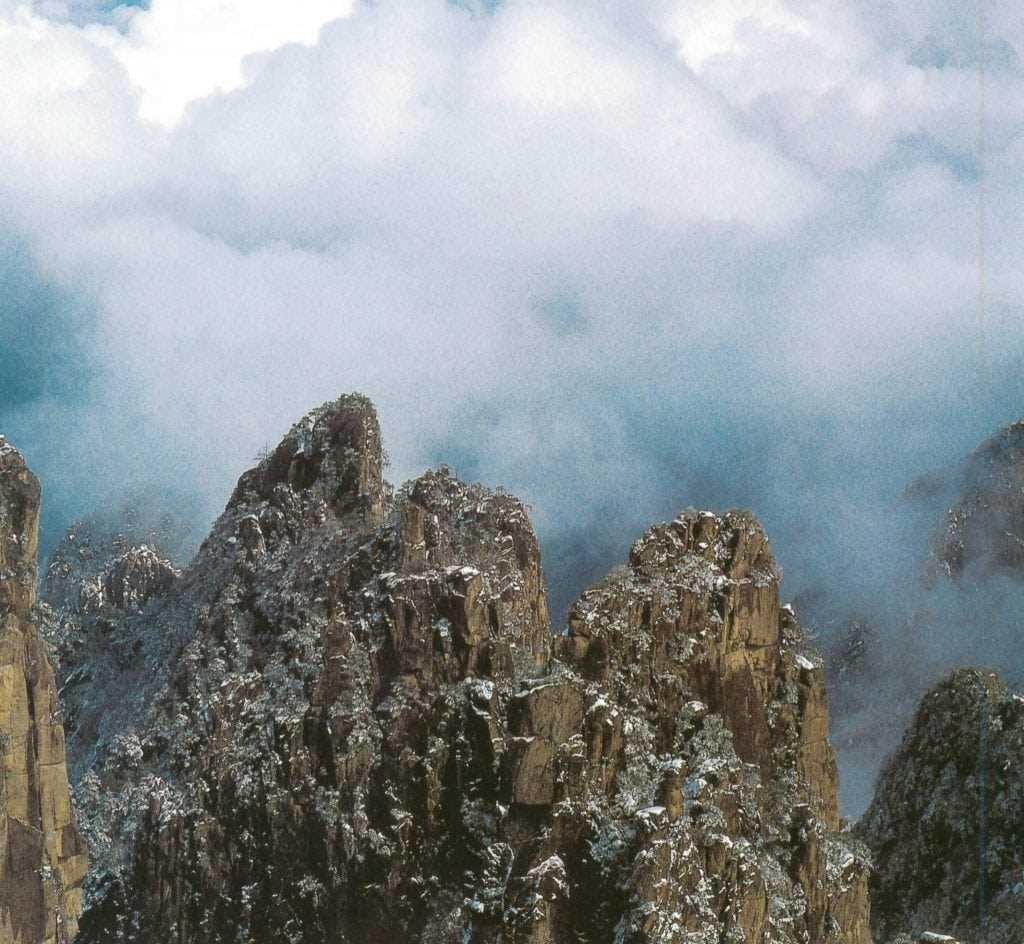 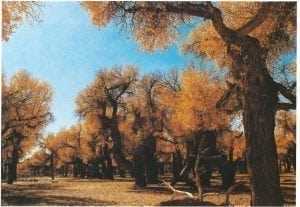 Diversiform-leaved poplar, one type of leaves-shedding arbor with the height accounting for 25-30 meters, grows in Xinjiang, Qinghai, Inner Mongolia, Gansu and Ningxia. It often grows in dry area of deserts and can stands extreme temperatures ranging from 45 centigrade high to 40 centigrade low below zero, and is one type of species that exist on the verge of extinction and are preserved by the state. 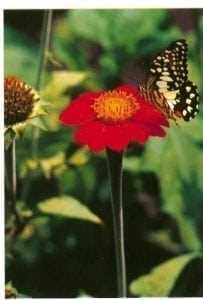