South Greenland attracts more and more tourists with its landscape rich with contrasts: from mountain climbers and trekkers, to guests with interests in culture and nature.

In clear weather the tourist will experience his first, breathtaking introduction to the region from Greenland’s outer coast while flying to South Greenland’s airport in Narsarsuaq, located a good 150 kilometers inland. 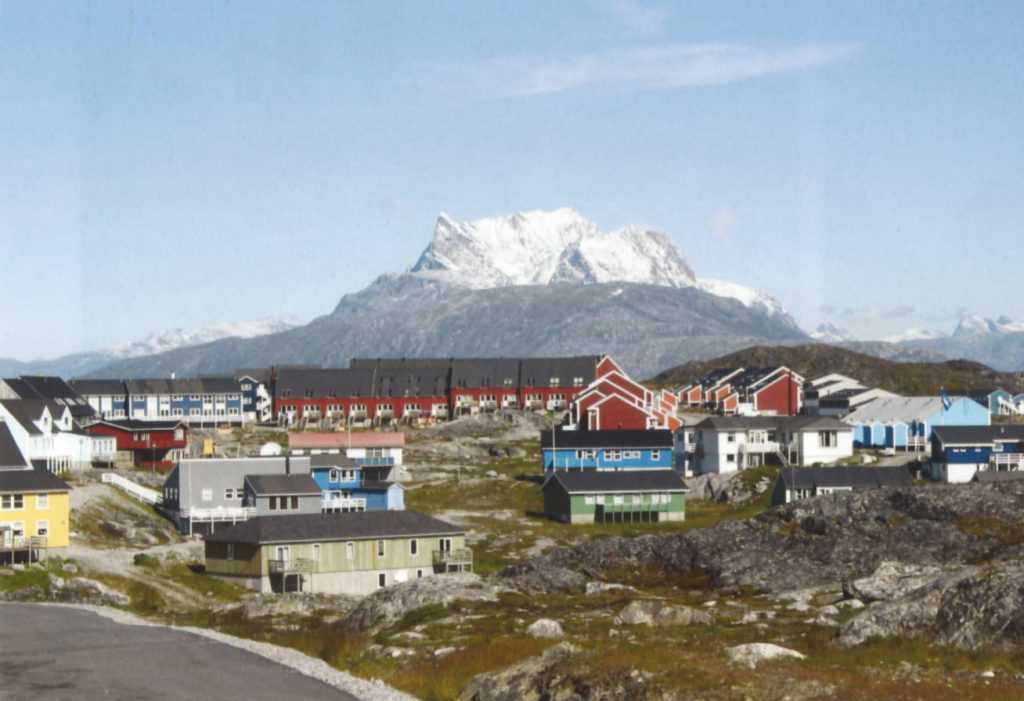 Turquoise blue fiords thread their way between mountains of fantastic colors and forms. White glacial tongues of ice pour out from the ice cap from deep inland. Here and there the grey shadow of an icy cloud praises an ambitiously high pinnacle decked with ice, then suddenly, a few green hills nestled far down in that wonderful adventure land below pop into view. Eric the Red arrived in Greenland and situated himself in South Greenland just before the year 1000 AD. Bratthalid (now called Qassiarsuk and located near Narsarsuaq) lay open to the fiord; behind it, the land lay fertile and perfect for farming; the land took its name from that fertility.

The Norsemen stayed in Greenland for approximately 500 years and their 0sterbygd ruins can be found all over South Greenland. More than 400 sites have been found in the region. The most often visited sites include the church ruins Hvalsey near Qaqortoq, the episcopal residence Gardar near Igaliko, Eric the Red’s Bratthalid in Qassiarsuk and the trade station Herjolfnæs close to Nanortalik.

The southern tip of Greenland is the most fertile area, with cultivated grass fields where local sheepherders grow feed for their stock. Potatoes and turnips are grown in large amounts and in the settlements, gardeners baby their pansies, sunflowers and vegetables in their own small gardens or in window planter boxes. Violet French willow, yellow dandelions and other wildflowers spring up along the roadsides and on the hillsides in the towns and settlements. There are, after all, only a few localities where settlers have been able to make their mark. 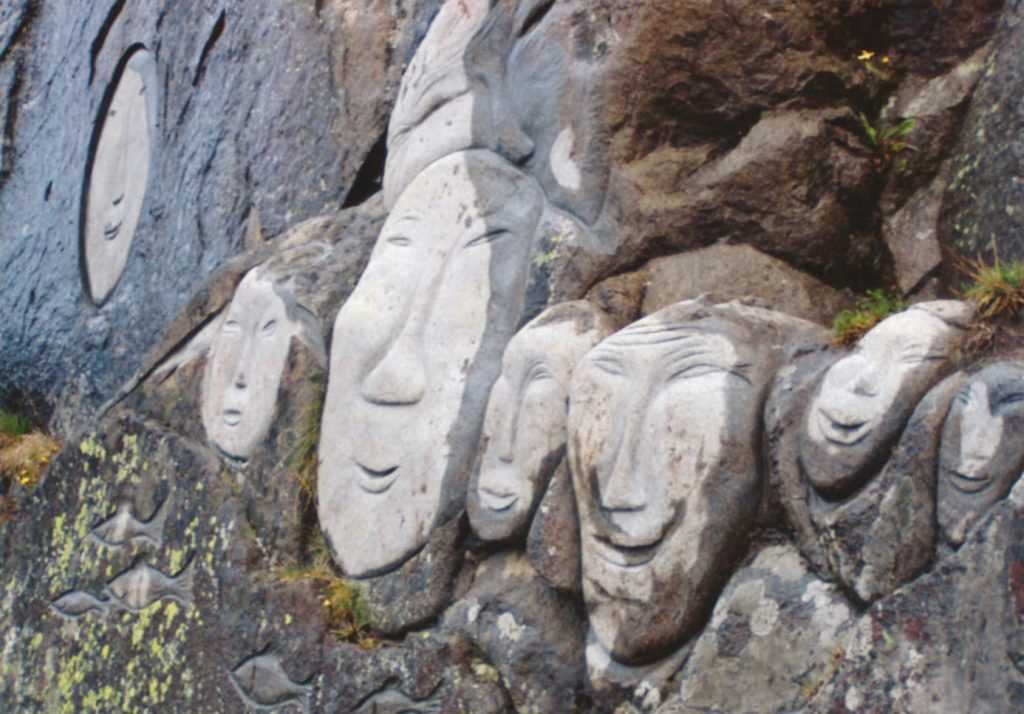 As everywhere else in Greenland, nature is its own master – formed by ice millions of years ago. There are only a few bushes to shade the landscape’s grand lines of grass-bestrewn, unending expanses, cliffs in all hues and shades, and, farthest off towards the horizon, black, saw-toothed mountain peaks. Between the mountains lie formations resembling grey clouds – the icecap itself. It is this contrast between the lush green and the cultivated landscape on the one hand, and on the other, the vast nature with its lichen decked mountains, unapproachable mountain peaks and the turquoise blue fiord with its floating formations of chalk white icebergs that that represent South Greenland’s most impressive characteristics and unassailable charm. Beautiful, enchanting and unique! 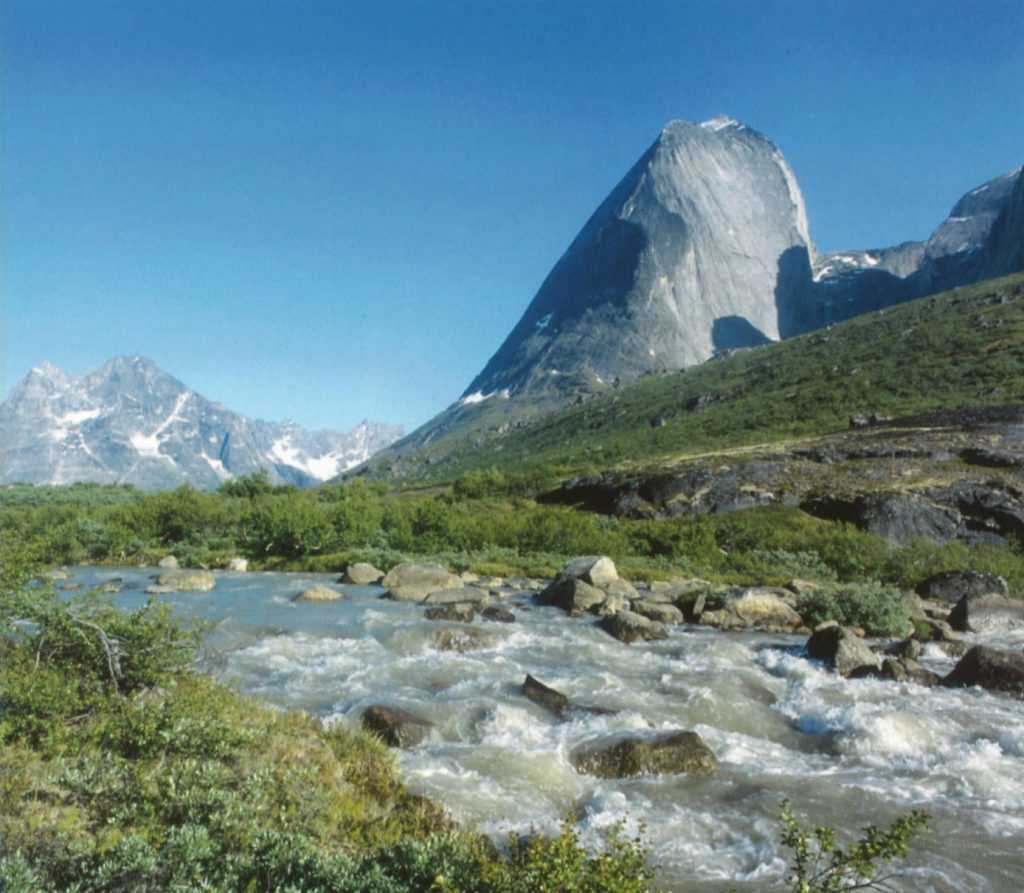 South Greenland is home to three municipalities each with its own main town: Narsaq, Qaqortoq and Nanortalik. Transportation is provided throughout the region by boat or helicopter. For the most hard core, there is always the kayak or the hiking boot.

It is impossible to overlook the contrasts in the area around the South Greenlandic town of Narsaq, where the sheepherders’ plentiful grass fields end at the broad, turquoise fiords filled with the most fantastic iceberg formations. The 1,300 meter high Kvane Mountain proudly displays its spire up through the powder light clouds; towards the horizon, the Ice Cap can just be discerned as a grey shadow between the closely spaced mountain tops and series of hills. There is access to the Ice Cap from both Narsarsuaq and Narsaq. Transportation is by boat, which must sail close to the ice. The tour to the Ice Cap also offers a landing on a tiny spit of land left by the receding ice.

In Qaqortoq it can be so warm during the summer, that children strip down and jump in the water from a drop off straight into a small strip of water that runs through the town. It can be so warm, that one can sit in a T-shirt in front of the town’s cozy restaurant, enjoying a drink while watching the icebergs out in the fiord.

However, the weather can change suddenly.  Grey cloud formations glide in to cover the mountain tops, the temperature falls noticeably, and then it is time to bring out a sweater and perhaps enjoy a guided tour of Great Greenland. Great Greenland is the town’s largest business with approximately 50 employees who, throughout the year, process seal skins delivered by hunters from all over Greenland. South Greenland’s largest town is the perfect point of departure for a tour to the Hvalsey Church ruins and the hot springs of Unartoq.

Nanortalik is Greenland’s most southerly town. The name means “the place with polar bears” because it is said that polar bears travel all the way to the south on the sea ice, which passes Greenland’s southernmost tip on its way out into the Atlantic Ocean. The fierce name fits like a foot in a mukluk with Nanorta- lik’s status as a place of pilgrimage for extreme sport enthusiasts who come from all over the world. Mount Ketil, which lies close to Nanortalik, is known amongst climbers as a formidable challenge. Tasermiut fiord, which springs from the edge of the Ice Cap, attracts kayakers and nature lovers because of its beauty and ruggedness. Fresh drinking water is available everywhere and it is not unimportant that fine, detailed hiking maps of the area around Nanortalik – as well as for most of South Greenland – are also available.