Hverfisgallerí welcomes you to the opening of the exhibition River únd bátur by Davíð Örn Halldórsson on Saturday, 24 June at 4 pm – 6 pm. The title refers to the fleeting existence of an artist who needs to either paddle along or sink. Both equally viable options.
Halldórsson’s exhibition in Hverfisgallerí consists of a colorful installation presented in patterned, at times psychedelic, mixed-media works of which reflect a variety of influences including graffiti, organic structures, textiles and collage. Each piece involves intertwined forms and colors, sometimes narrative, but always fantastically odd and mysterious. As his works are often painted directly onto wood panels, at times even moving from canvas to the gallery wall like a seamless floating dreamscape, Halldórsson’s style is as intricate as it is frenzied. 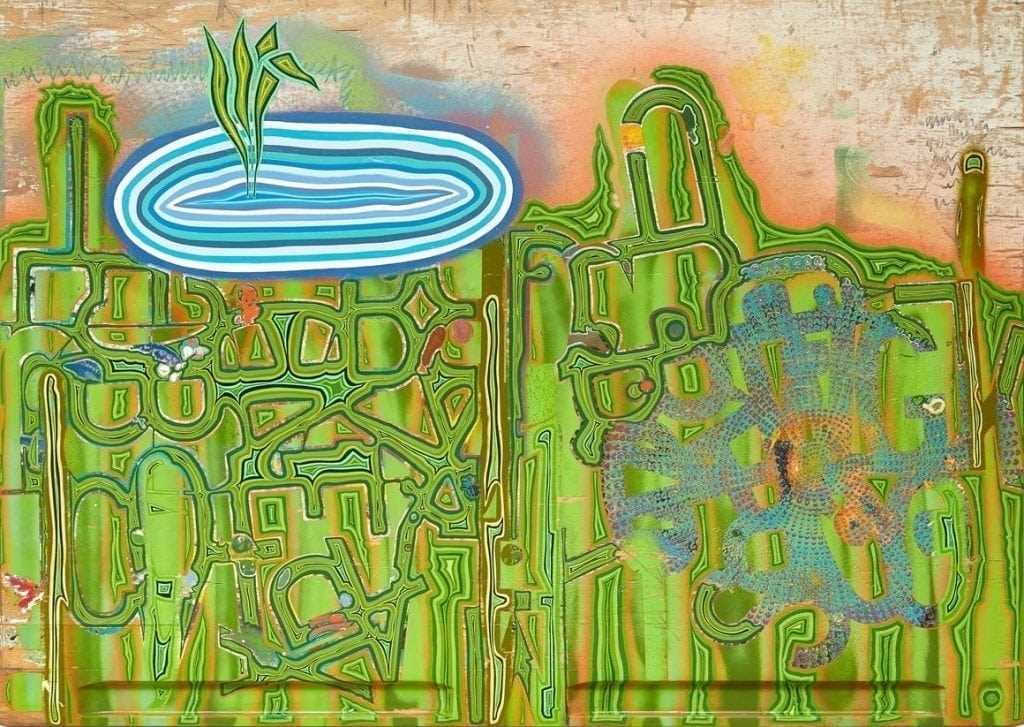 Halldórsson’s works are often based on events of the daily life; a personal processing of his surroundings, carried out in a visual language, which references cartoons, graffiti, Pop-Art and Western Art History. His background in printing is as well evident in his works and provides the material ground on which the artist builds his practice on. Among his most used mediums are lacquer and spray paint which he applies to found wood like old cupboard doors and tabletops. By doing that he gives a material, possibly considered a left-over or trash, a new aesthetic meaning.
The artist’s works are full of surprises and contradictions and the application of paint within the same work often seems casual and compulsive at the same time. Sweeping, spray-painted gestures and flowing organic forms give the paintings a feel of spontaneity and, yet, they are full of intricate decorative patterns. They often look like parts of larger paintings, as if they had been cut from wall-size panels, but within them one finds self-contained, autonomous worlds.
Davíð Örn Halldórsson (b. 1976) lives and works in Reykjavík. He has mainly worked with painting since graduating from the Visual Arts department of The Icelandic Academy of the Arts in 2002. Halldórsson has held several solo exhibitions in Iceland and internationally. In 2014 he received the prestigious Carnegie Art Award grant to a younger artist. Halldórsson has been with Hverfisgallerí since 2015 and the exhibition River únd bátur is his second solo exhibition at the gallery.
For further information contact Sigríður L. Gunnarsdóttir and Ásdís Spanó at [email protected] / [email protected] or +354 864-9692.
image: Davíð Örn Halldórsson, Skrifborð (natúrtisch), 2017, mixed media on found wood. 71×100 cm. Photograph by Vigfús Birgisson