Gold under Skógafoss
The road eastward across the plains of south Iceland passes through the districts of Ölfus, Flói, Holt, Rangárvellir, Hvolhreppur and Landeyjar. Finally, it crosses the Markarfljót river into Eyjafjallasveit, one of the most picturesque and pleasant regions of Iceland. The landscape there is dominated by the high peaks of Mt. Hekla and the Tindfjallajökull and Eyjafjallajökull glaciers (the latter the tallest peak in the south, at 1,666 m high). Out at sea, the Westman Islands rise up from the ocean depths and from the road by the Seljalandsfoss waterfall they appear to be just offshore.
The coastal lowlands narrow towards the east of the Eyjafjallasveit region and the road passes Hrútafell, Drangshlíðarfjall and Drangshlíðartindur. At Drangshlíð stands a rock, Drangur, from which the place derives its name. According to a folk tale, the semi-legendary Grettir once passed through this area in a bad mood. In his rage, he grabbed a handful of the mountain and flung it westwards onto the lowlands. The rock he threw down is Drangur, while Grettisskarð (Grettir’s Pass) is a corresponding gap in the mountain ridge above. Other local place-names include Grettisgluggi (Grettir’s Window) and Grettisspor (Grettir’s Footprint). Long ago, Drangur was reputed to be the home of elves and other supernatural beings. A sheepshed and cow-shed were built up against the rock, and it is said that the farmer did not need to watch over his beasts when they were giving birth, for the elves always took care of them.
Beyond Skóganúpur on the Skógaá river the lowlands broaden once more. Ahead on the right Skógasandur stretches down to the sea; part of these once-barren sands has been successfully planted with grass,resulting in new green fields. On the left below the mountain slope is the hamlet of Skógar and a little farther west is Skógafoss, one of Iceland’s most beautiful and impressive waterfalls. There has been a school at Skógar since 1949 and a small community has grown up around it. Skógar also boasts an excellent folk museum, which includes a number of old buildings that have been reconstructed on the site and even a church of the 19th-century type. In the summer holidays, the schoolhouse functions as a hotel. 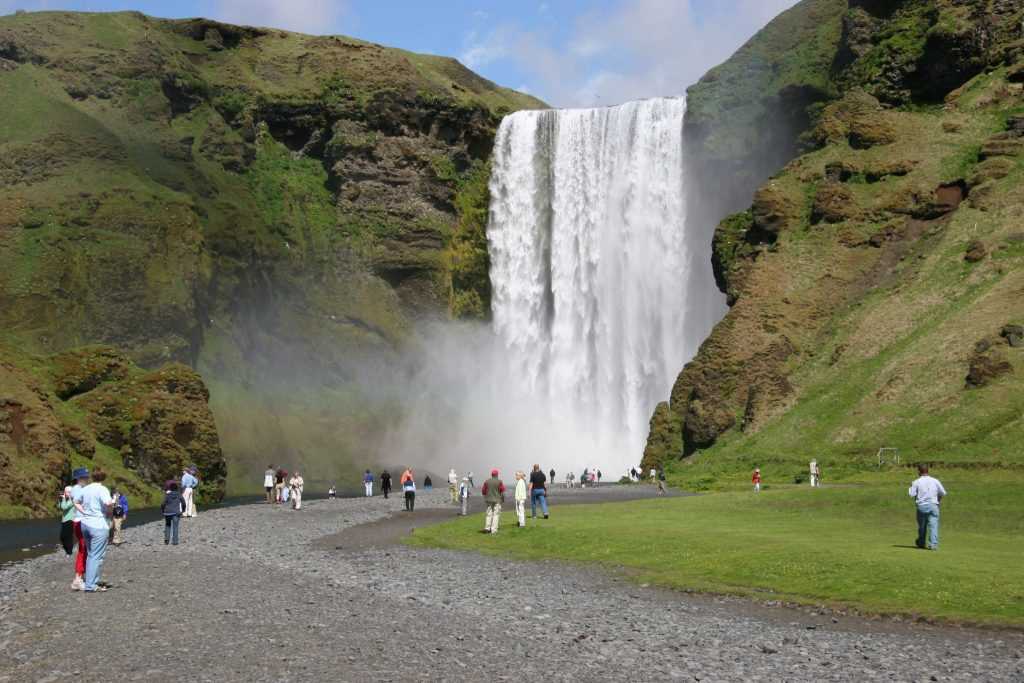 In recent decades, woods have been planted on the slopes above the school, so that Skógar (Woods) once more lives up to its name. Nothing remains of the woods that originally grew here except the trees on Viðarhólmi (Wood Islet) in the Skógaá river above the waterfall. Farther upstream, the Skógaá river abounds in waterfalls, many of them beautiful, though none to rival Skógafoss. From Skógar a car track leads up on to Skógaheiði, and from there a footpath leads over the Fimmvörðuháls pass and down into the upland valley of Þórsmörk; this is a very popular route with highland walkers. 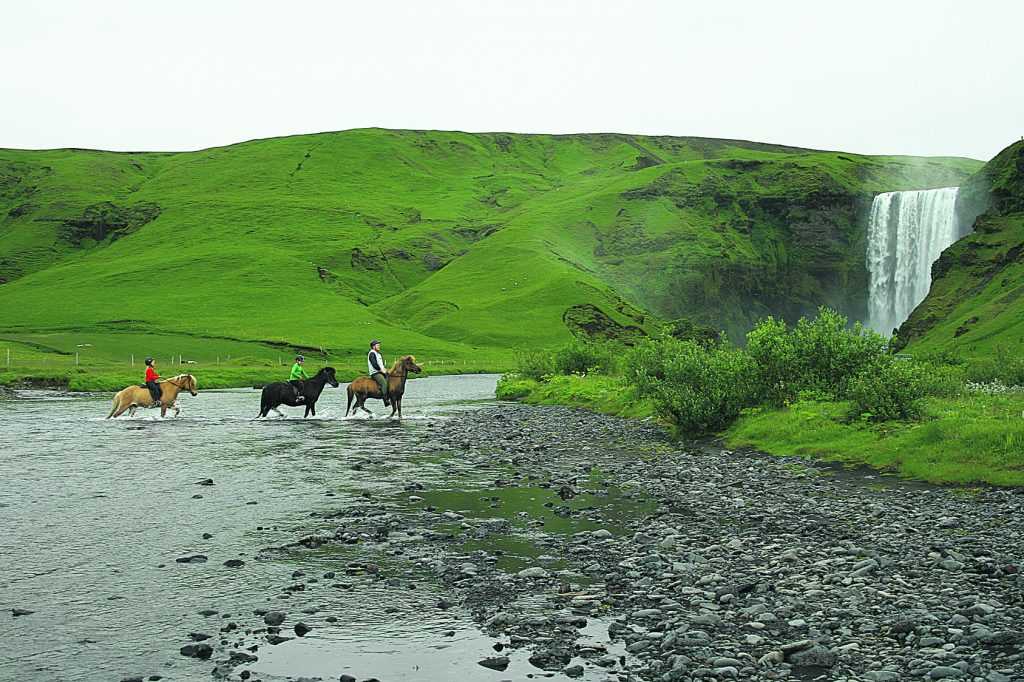 The first settler at Skógar was named Þrasi Þórólfsson. He was said to be a great warrior, well informed and with supernatural skills. Þrasi had a dispute with Loðmundur the Aged (see p. 148), who had settled at Sólheimar east of the Jökulsá river. Both men had magical pow¬ers and their dispute grew ever more rancorous. One after the other, they diverted the Jökulsá river over each other’s land, creating the wastelands of Sólheimasandur and Skógasandur. Eventually they saw that neither could win the feud, so they met halfway and agreed that the river should flow the shortest route to the sea. Þrasi made his home just east of Skógafoss: probably he was impressed by the 60 m cascade, since in his old age he took a great chest full of gold and treasure, and threw it under the waterfall. The tale goes as follows:
Þrasi of Skógar was a man of great wealth. When he was old and felt that death was approaching, he decided that he did not want his wealth to be dispersed after his day. So he took a chest full of money and valuable goods, and sank it in the deep pool beneath the Skógafoss waterfall. There the chest has lain for century after century: for a long time, the end of the chest could be seen under the waterfall. Over the ages many people have tried to lift the chest out but without success. Once it was a near thing, for some brave men managed to get a rope through a ring on the end of the chest. They started hauling the chest up and all went well at first. But then the ring suddenly came off its fastenings and the chest vanished into the depths. All they had left was the ring which they took back to Skógar. 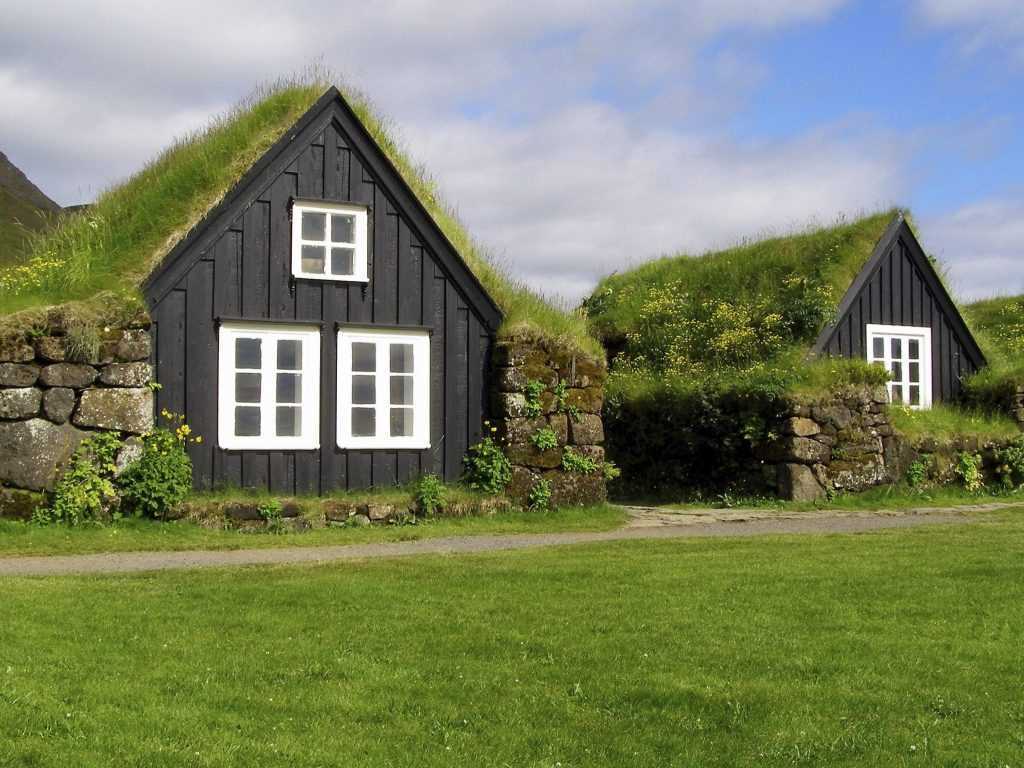 Skógar used to have a church and the idea arose of fitting the remarkable ring to the church door. But in 1890 the Skógar church was deconsecrated and demolished. The ring from the door found its way to Eyvindarhólar and was fitted to the church door there. In 1960, a new church was built at Eyvindarhólar and the old one demolished. The ring was not used for the new door and so it went to the Skógar Folk Museum, where it is on display, one of the treasures of the museum’s collection.
It is probably not worth diving down under Skógafoss in search of Þrasi’s treasure-chest, since this is, after all, a folk tale. But there may be a grain of truth in the tale, as witness this old verse that has been passed down from generation to generation: