These German travellers had fun horse riding around Rauðhólar. Rauðhólar is a cluster of pseudo craters on the outskirts of Reykjavík. The craters formed about 5,000 years ago when the Elliðaár lava flowed over moorland and the water under the glowing lava exploded. Beautifully shaped red-coloured spatter cones then formed during the steam explosions on the surface of the lava. Sand quarrying was extensive in Rauðhólar in the middle of the 20th-century, to make, among other things, the underlay for Reykjavík Airport in Vatnsmýri during the Second World War. The Rauðhólar area was protected in 1961 and is now a public park. Many people and animals make their way around the area on days with good weather, as it is only a stone’s throw from the capital. 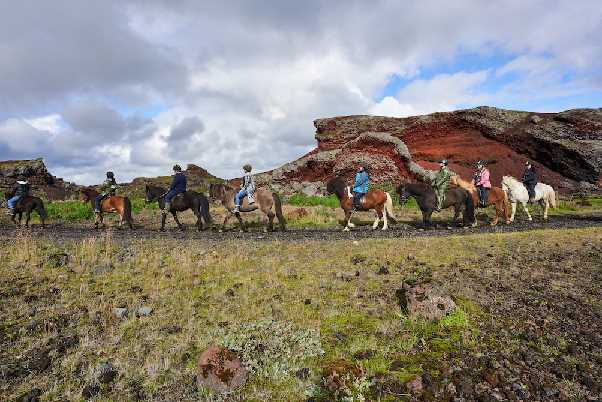 Does the Icelandic horse understand German? Not unlikely after hearing these German tourists chattering with the horses in their mother tongue in Rauðhólar yesterday.