Women are the winners in the elections

Women are the winners in the elections

The results of the parliamentary elections are now available. The main winners of the election were the Progressive Party, one of the three parties that make up the government, and the People’s Party. The Centre Party was the biggest loser, losing half of its support since the last election, and the Left Green Party, the party of Prime Minister Katrín Jakobsdóttir. The largest party, as usual, is the Independence Party with 24.4% (-0.8% since the last election) of votes. The Progress Party is in second place with 17.3% (+ 6.6%) of votes. The Left Greens received 12.6% (-4.3%) of the vote. Samfylkingin the Socialist Party received 9.9% (-2.2%) of votes. The People’s Party received 8.8% (+ 1.9%) of the vote, the Pirates 8.6% (-0.6%), Viðreisn received 8.3% (+ 1.6%) of the votes, and finally the Centre Party which received 5.4% (-5.5%) of votes. The remaining parties polled less and did not reach the minimum 5% required to enter the Althingi (Parliament). What is remarkable about the results of this election is that for the first time, women are in the majority in Althingi. Of the 63 members, 33 are now women, and 30 men. Ten percent of the MPs, or six in number, bear the father’s name, Gunnarsson or Gunnarsdóttir. 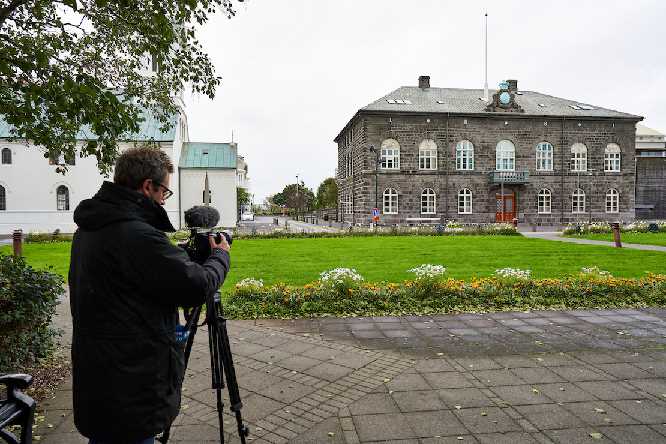 Tom Little, reporter for AFP news was one of the few who were out in the downtown area early this morning. Here he is taking video of the Alþingishúsið or Parliament building, which was built in 1881, where the 63 MPs will sit in the Icelandic Parliament