MUSIC FROM CUBA AND SPAIN SIERRA 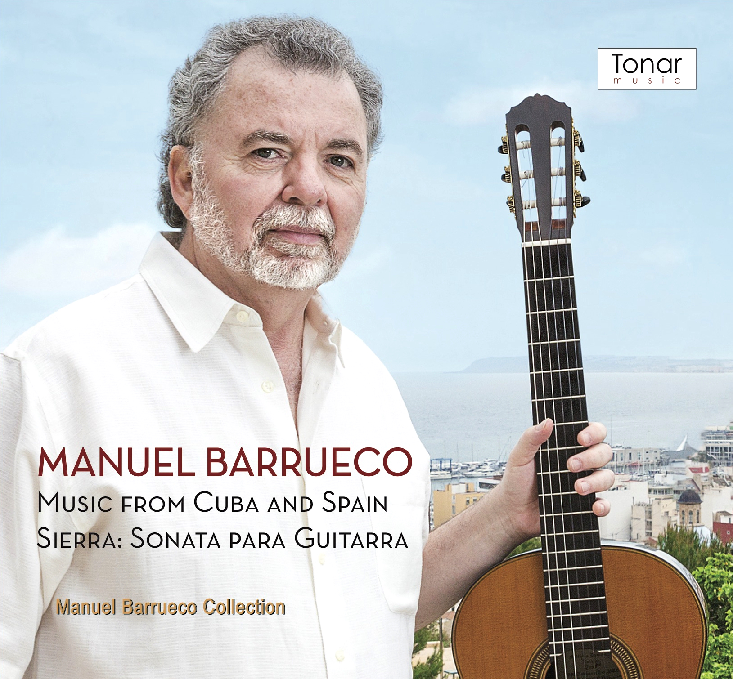 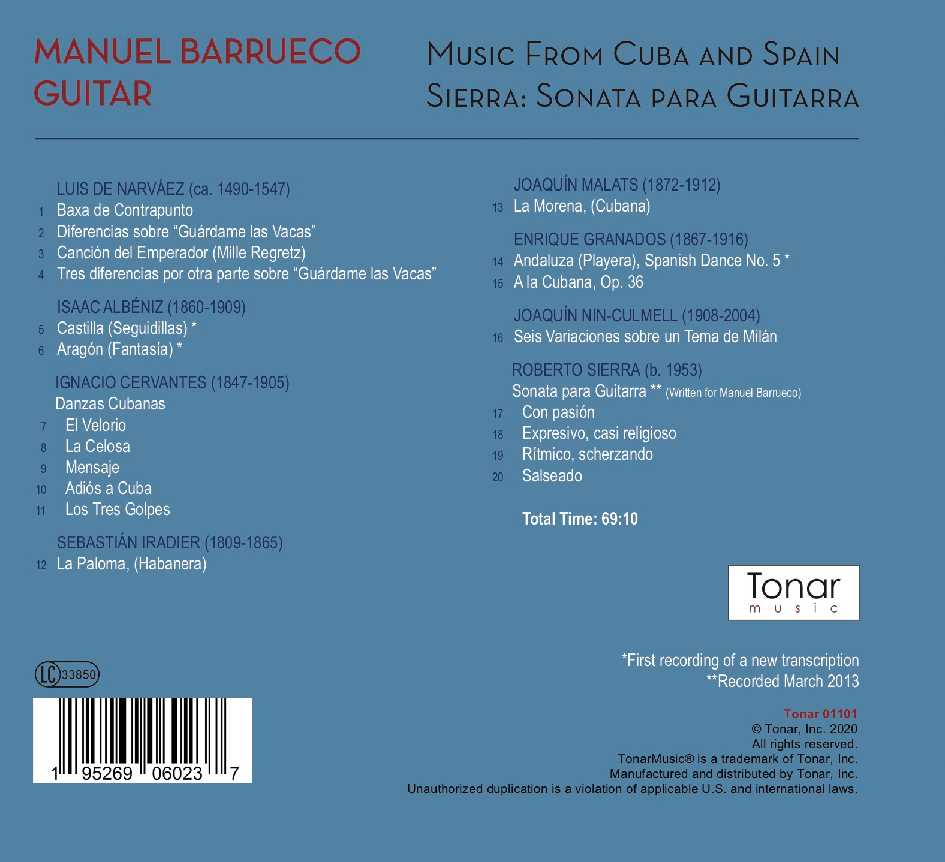 Tonar Music© proudly announces that “MUSIC FROM CUBA AND SPAIN; SIERRA: SONATA
PARA GUITARRA” – featuring internationally renowned guitarist Manuel Barrueco – has received a Latin GRAMMY nomination in the category Best Classical Album. Nomination
goes to the artist Manuel Barrueco and the producer, Asgerdur Sigurdardottir.
“CUBA AND SPAIN” includes compositions and arrangements of music by Spanish and Cuban composers, such as Narváez, Albéniz, Cervantes, Iradier, Malats, Granados, NinCulmell, as well as Sonata para Guitarra by Puerto Rican composer Roberto Sierra, which was also nominated in the category Best Classical Contemporary Composition.
“The original idea for this recording was to explore musical connections between Cuba and Spain. Later I thought it would be important to include Roberto Sierra’s magnificent Sonata para Guitarra. Though Sierra is not from Cuba or Spain, he is from Puerto Rico which is a country with a culture so similar to Cuba’s that they have been described as “the two wings of one bird” (de un pájaro las dos alas)” says Barrueco.
Tonar Music© is a record label and music publishing company based in Maryland,USA. The recording is mastered by recording engineer, Ed Tetreault

The original idea for this recording was to explore musical connections between Cuba and Spain. Later I thought it would be important to include Roberto Sierra’s magnificent Sonata para Guitarra. Though Sierra is not from Cuba or Spain, he is from Puerto Rico which is a country with a culture so similar to Cuba’s that they have been described as “the two wings of one bird” (de un pájaro las dos alas).
Luis de Narváez (ca. 1490-1547) is one of the most important composers and vihuelists of the Spanish Renaissance, a period also known as the Golden Age of Spain. Included in this recording are Baxa del Contrapunto, a popular XVI century dance; two sets of diferencias or variations on Guárdame las Vacas (Look After the Cows for Me), which was a popular song with a melodic-harmonic pattern known as romanesca; and Canción del Emperador (Song of the Emperor), Narváez’s version of Mille Regretz (Thousand Regrets) by Josquin des Prez, said to have been a favorite of Charles V, Holy Roman Emperor, hence the title.
Castilla and Aragón, written by the great Spanish composer Isaac Albéniz (1860-1909), remind us that King Ferdinand of Aragón and Queen Isabel of Castilla, the Catholic Monarchs of Spain, sponsored Christopher Columbus’ voyages to the new world, leading to the discovery and the
colonization of Cuba. Both pieces form part of Suite Española, Op. 47, which also contains a Capricho called Cuba. Castilla is a Seguidillas, a dance typical in some regions of Castile, while Aragón is a Fantasía.
Ignacio Cervantes (1847-1905) is one of the most important and beloved Cuban composers of the nineteenth century. His Cuban Dances, based largely on popular culture, are full of elegance and refinement. Often with whimsical titles, they are built on syncopated rhythms typical of Cuban music and melodies full of charm and melancholy. Included here are: El Velorio (The Wake), La Celosa (The Jealous One), Mensaje (Message), Adiós a Cuba (Farewell to Cuba), and Los Tres Golpes (The Three Knocks).
La Paloma (The Dove) is one of the most beloved Spanish songs of all time. Written by Sebastián Iradier (1809-1865) after visiting Cuba around 1860, it is a habanera, a popular dance from Havana at the time. Another habanera by Iradier is El Arreglito (The Little Arrangement), which Georges Bizet, believing that it was a folk melody, recomposed to become the famous aria L&#39;amour est un oiseau rebelle in his opera Carmen.
Bizet later revised the score to recognize Iradier as the composer. Iradier died in obscurity, never to see how popular La Paloma would become.
La Morena (The Dark-Skinned Woman), was written by the Spanish pianist and composer Joaquín Malats (1872-1912). He was close friends with Albéniz and Granados and a devoted proponent of their music. He wrote mostly salon pieces for the piano such as the tropical and sensual La Morena, subtitled Cubana, and his most famous piece, Serenata Española, which would become a favorite among guitarists after Tárrega made a transcription of it.
A la Cubana (In the Cuban Style) was written by the great Spanish composer Enrique Granados (1867-1916) whose father, a Spanish army captain, was actually Cuban. Listening to A la Cubana makes one wonder if Granados knew Cervantes’ music and was inspired by it. It is a warm and lyrical piece in two movements written in rondo form, with its swaying, tropical opening theme continually returning. Andaluza or Playera are the titles of Spanish Dance No. 5 from Granados’ Spanish Dances, Op. 37. It is one of his most famous compositions, if not the most famous.
Born in Berlin of Cuban parents, Joaquín Nin-Culmell (1908-2004) was the brother of writer Anaïs Nin and the son of Cuban pianist and composer Joaquín Nin. Trained in Paris, he studied with Dukas and later with Manuel de Falla. Nin-Culmell wrote his Seis Variaciones sobre un
Tema de Milán (Six Variations on a Theme by Milán) for the Cuban guitarist José Rey de la Torre, with whom I briefly studied. These charming variations never depart too far from the Pavana by the Renaissance composer Luis Milán, on which they are based.
Born in Puerto Rico in 1953, Roberto Sierra studied with György Ligeti in Germany. His compositions are part of the repertoire of many of the leading orchestras and ensembles in the United States and Europe. He has written numerous works for the guitar, both solo and in ensemble, as well as several concertos. I am honored that this brilliant sonata was dedicated to me. About the Sonata Sierra writes:
“The first movement of the sonata follows the traditional structure of exposition-development-recapitulation. Although the harmonies are not tonal, a strong sense of “e” permeates the whole work; each movement clearly ends and gravitates towards this tone. The second movement is
built on a simple passacaglia motive that builds to a climax, and then ends in the quiet manner in which it started. A wild scherzo precedes the ending movement, which is built on Caribbean inspired rhythms.”
Manuel Barrueco