In the upper reaches of the Borgarfjörður valleys, the Hvítá (White River) falls from the uplands, dividing the communities of Hvítárssíða and Hálsasveit. The landscape of this region is varied and attractive; lowlands are interspersed with rolling hills, rugged lava fields and fragrant birch woods beneath the peaks of Strútur, Hafrafell, Ok, and the Eiríksjökull and Langjökull ice-caps. The form of Kalmanstunga lies closest to the highlands on the northern side of the river, while Húsafell is closest on the southern side. There are various caves under the lava fields nearby, including Víðgelmir, Stefánshellir and Surtshellir, which was used as a refuge by outlaws long ago. Surtshellir, about 1,500 m long, is believed to be Iceland’s largest lava cave; it is easily accessible, only about 7 km from Kalmanstunga. 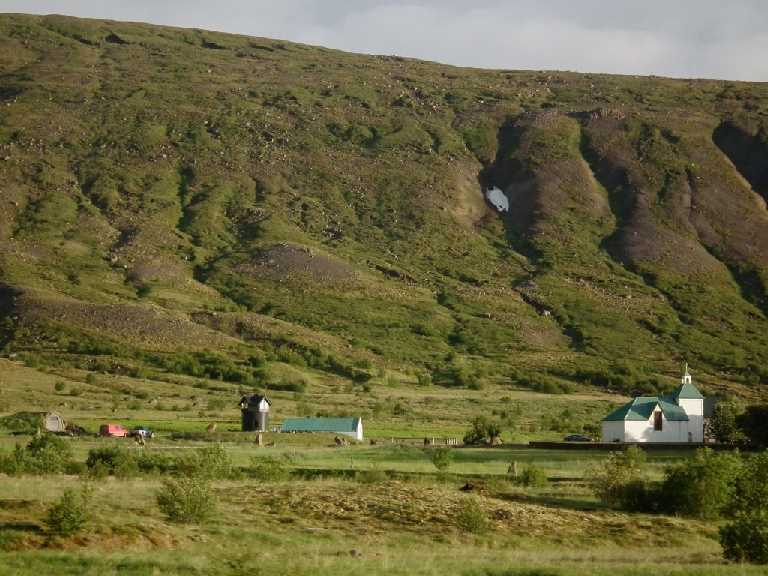 Húsafell is an old church site. The best-known pastor of Húsafell was probably Snorri Björnsson, who served the parish from 17 5 7 to 1803. A man of prodigious physical strength, the Rev. Snorri would demonstrate his prowess by lifting a rock, Kvíahella, which can still be seen at Húsafell; it weighs 180 kg. He would also challenge visitors to try lifting the rock. The Rev. Snorri was reputed to have magical powers, and he is said to have exorcised more than 80 ghosts which were sent to plague him. The place where the ghosts were laid is known as Draugarétt (Ghosts’ Enclosure). The original parish of Húsafell was abolished in 1812 but a new chapel was consecrated there in I973, based on designs by the artist Ásgrímur Jónsson (I 876 – 1958), who often painted at Húsafell.

Extensive birch woods flourish at Húsafell and it is a popular spot for outdoor gatherings. Many summer houses have been built in the area, which has abundant geothermal resources to heat houses and a swimming pool. Various services for visitors, including a shop, are available there. Within the estate af Húsafell is the former farmstead of Reyðarfell, which was abandoned in the 15th century, and has recently been excavated. From Húsafell a mountain road leads south via Kaldidalur (between Ok and Langjökull) to Þingvellir (see p. 210).
The form nearest Húsafell is Hraunsás. Adjacent to this form, a little downstream from where the Norðlingafljót flows into it, the Hvítá river boasts some extraordinary waterfalls. The Hraunfossar (Lava Falls), about a kilometre in length, are a multitude of tiny, crystal-clear streams that flow from the edge of the lava field on the north bank of the river, cascading between rock, moss and birch into the murky waters of the glacial river.
Just upstream is Barnafoss (Children’s Falls), where the Hvítá river swirls though a narrow gorge in spectacular falls and rapids. These falls are now traversed by a footbridge, but traces of old stone bridges can be seen in the gorge. According to folklore, the river was once bridged by a natural stone arch:
Once upon a time a wealthy woman lived at Hraunsás, and she had two young sons. One day she went with her entire household to church at Gilsbakki, north of the river, but both boys stayed behind. She told her sons to stay at home and not to stray from the house while she was away. But when everybody had gone, the boys grew bored and even­tually they decided to go after the others to church. They walked down to the Hvítá river and soon reached the stone arch. The arch is said to have been rather narrow, with a long drop down to the river and the waterfall beneath. The boys were frightened and they held hands to cross the river. Things went well until they reached the middle of the stone arch and looked down into the maelstrom below. They grew so dizzy looking down into the eddies that they fell from the bridge into the river and drowned.
When the churchgoers returned home, the lads were nowhere to be found. Their mother ordered a search, but for a long time this was fruitless. Eventually she learned what had happened, for someone had seen the boys on their way to the river but had been too late to save them. The woman then grew very upset and angry, and she had the stone arch over the river broken down, saying that no one should cross it alive ever again. The waterfall has been identified with this event ever since, and is now known as Barnafoss (Children’s Falls). 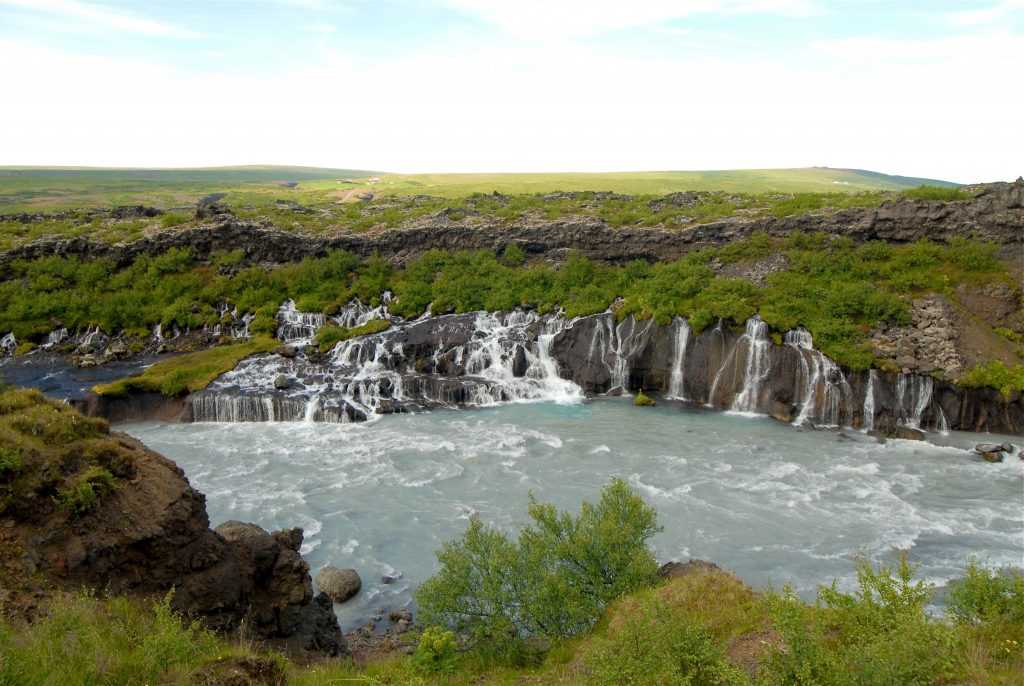 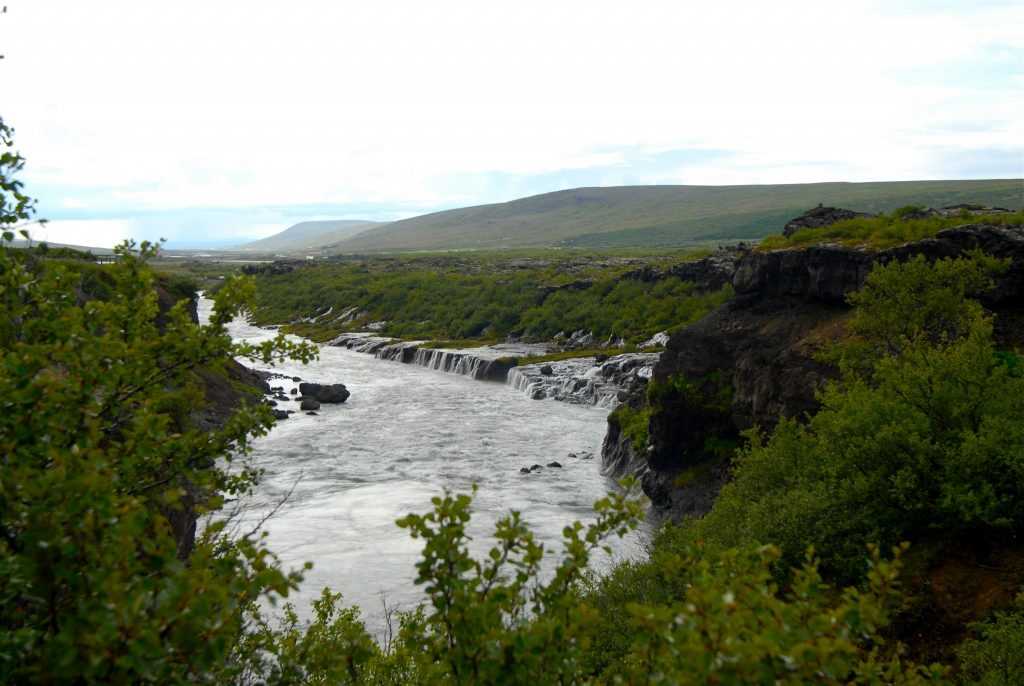 The mother was especially distressed that her sons’ bodies were not found, so that they might lie in consecrated ground. She promised that she would give the estate of Norður-Reykir to the church in the parish where their bodies were washed ashore, and that she would give the estates of Hraunsás and Húsafell to the church where they were buried. Shortly after this, the boys’ bodies were washed ashore near Norður-Reykir, in the parish of Reykholt. Her sons were laid to rest at Reykholt and all three estates passed into the possession of Reykholt Church.