From Fire to Ice

On your way into Reykjavik, you can see thick columns of steam rising over the mountains. The source of much of the capital’s heating, the water is heated deep in the earth on the burning rocks of volcanoes long dormant. The tour to Jökulsárlón takes you over those mountains, past the powerful steam vents from the geothermal power station at their foot, to the south of the country. It’s easy to use superlatives in describing Iceland’s many features but this is one tour in which they are justified. Nestled on the other side of the mountains is the little garden town of Hveragerði, where the hot springs that bubble up are also used for cooking and growing food, among other things. It’s a volatile region, where earthquakes have shaken things up in recent years. However, it looks placid now, with green fields and small farms stretching to the sea.

All will be revealed

One of the greatest benefits of taking a tour is that the knowledgeable guides can tell you all about the area while you are enjoying the comfort of being a passenger and not having to be concerned about the driving.
Through their narration, you become immersed in the history, geology, culture and lifestyle of both past and present whilst soaking in the beauty of the countryside. Travelling down to Jökulsárlón, you pass through the countryside where Njál’s saga was enacted. In the small town of Hvolsvöllur, the Saga Centre tells the whole tragic story.
Mount Hekla, known as the ‘Gateway to Hell’ is clearly visible before the town as you enter this area of volcanoes both old and new.
It is also an area of beautiful waterfalls and the tour stops at two very different falls: Seljalandsfoss and Skógafoss. The glaciers you pass grow increasingly massive in size until you find yourself travelling under Europe’s largest, the mighty Vatnajökull. These glaciers are deceptive: under the ice, they hide increasingly violent, fiery volcanoes, from Eyjafjallajökull to Katla to the biggest, Öræfajökull, hiding just behind Iceland’s highest peak. 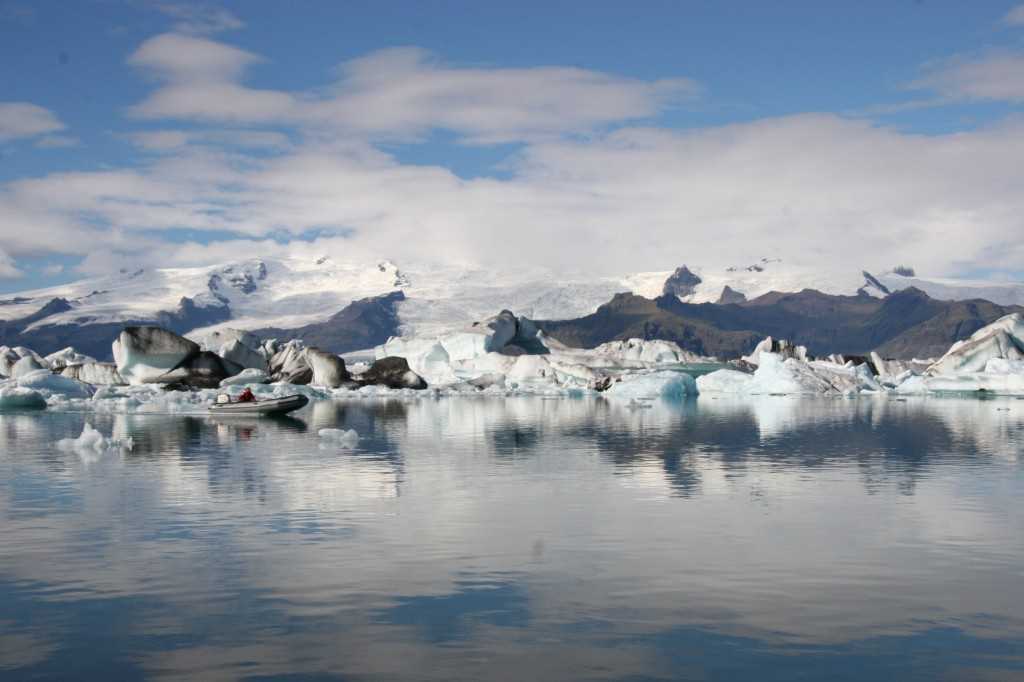 Arriving in a fantasy

As the ice melts, glacial tongues stretch down towards the road. However, at one point, something unique takes place. It began in the early 1920s, when melting ice couldn’t reach the sea and formed a lagoon. Since that time, it has grown in size year by year and now some of the melting icebergs will make it to the sea. Often, the ocean swell will sweep fish into the lagoon. The seals know this makes a good restaurant for them and they are often to be seen basking on an iceberg after a good meal.
Even from the lagoon’s edge, this is a fantastic sight, as the sunlight plays off the blocks of ice. However, the tour continues on an amphibious boat, winding its way through the icebergs, up towards Vatnajökull itself. Sometimes, the ice can actually be seen breaking off this massive glacier, starting its journey to the sea.
The photo opportunities at the lagoon are quite amazing but it’s the experience of just being there, in the silence, amongst the ice, formed into fantastic shapes that really counts. The photos you take will provide beautiful memories of this trip into a fantasy world and a talking point with friends for years to come.