Healthy Food Direct from the Earth

In the old days, people still had knowledge about nature’s richness. They used what Mother Earth provided them: picked leaves and herbs, or searched the shores for the ocean’s supplies such as seaweed. The shore is a garden; you just have to know where to harvest and what to collect. A Pioneer
Biologist Eyjólfur Friðgeirsson knows nature pretty well. He is passionate about the harvesting of nature, which he sees as a food source and a treasure for delicacies. In 2005 he started his company Íslensk ho 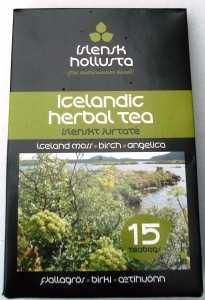 llusta (Icelandic Wholesomeness), aiming at the use of natural Icelandic products in their own taste and freshness, such as cheese and a varieties of herbal tea. Nothing is added or changed in the production of the products.
Eyjólfur is a pioneer in his field in Iceland. He was the first one to revive the idea of using seaweed as a dried snack and adding Iceland moss, angelica and birch leaves into cheese making. He was also the first to create a bath salt from Icelandic geothermal salt, using seaweed and Mount Hekla pumice. The country is rich in natural resources when it comes to nutriment. His task was to reawaken folk knowledge about how to harness these gifts of the earth. The idea proved to be a success, and today his goods can be purchased in souvenir shops around Iceland. Northern Lights Salt (a seasoned salt made according to his special recipe) gift packages are available in Icelandair’s Saga Shop on board your aircraft. Hand-Picked and Healthy
The hand-picked Iceland moss is ready for use in tea or porridge. In the old days, seaweed was consumed in times of famine. Today we know that there is hardly a more nutrient food. By adding seaweed to your daily diet, you can be sure that you are consuming ingredients from unspoiled Icelandic waters. Homemade sauces, juices and jams made from traditional materials are a treat. Pamper your body with a rich bath salt, or treat yourself with Icelandic Herbal Tea and Arctic Thyme Tea from Íslensk hollusta. Try the Viking Salt, produced with an ancient salt production method. The light and compact Seven Spices Gift Packet containing tea, salt and seaweed is an excellent contribution to your cuisine.
“Mother Earth knows what is best; we pick it for you, and you just have to take it home,” says Eyjólfur.