The Snorrastofa Cultural and Medieval Centre is in Reykholt

Snorri Sturluson (1179-1241), Iceland’s best known Saga writer and scholar, is the author of such important and famous works as Heimskringla, which is one of the most important sources of Scandinavian history, Snorra Edda, a handbook on poetry and mythology and probably one of the very best Sagas of Icelanders, Egil’s Saga, the story of the Viking poet Egill Skallagrímsson.
Snorri’s records of the Old Norse language and Nordic mythology are invaluable to modern scholars. The quality of his writing made him the foremost historical writer of medieval times throughout Europe. His style, bringing his characters to life, makes fascinating reading even today.
Snorri was a wealthy and powerful chieftain in the age of unrest and civil war preceding Iceland’s loss of independence. He was murdered by his enemies in his home on the 23rd September 1241.

Snorrastofa
Snorrastofa, the Cultural and Medieval Centre in Reykholt in West Iceland, was founded in memory of Snorri. It is situated on his ancient homestead, which is considered one of Iceland’s most noteworthy historical sites. Snorrastofa manages research, a library, an exhibition about Snorri and conference facilities. It also runs a tourist reception and a souvenir shop, which offers books, postcards and Icelandic designs, some exclusively for sale in Snorrastofa.

A new exhibition
‘The Snorri Sturluson Saga’, can now be visited in Snorrastofa. It tells the story of Snorri’s exciting life, addressing issues such as upbringing, education, writing, properties and manors.
Snorri’s bath (a geothermally heated pool) can be seen outside along with the tunnel which led from his private manor directly out to the pool.
A statue of Snorri by Gustav Vigeland stands in front of the old district school, which was used between 1931 and 1997. Today the beautiful building, designed by Guðjón Samúelsson, is administrated by Snorrastofa, offering apartments and study facilities for scholars, along with meeting and conference facilities. 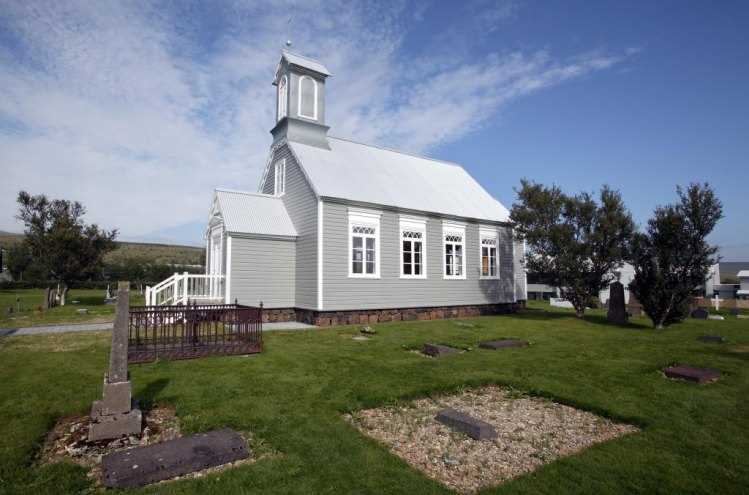 The Reykholt Churches
There are two churches in Reykholt: the old church, consecrated in 1887, now beautifully restored by the National Museum of Iceland, and the new church built between 1988 and 1996. The new church is known for its strikingly designed windows (designed by Valgerður Bergsdóttir) and its acoustics. The church is famous for its concerts all year round. A classical music festival of the highest quality, The Reykholt Music Festival is held annually on the last weekend in July.
Snorrastofa’s exhibition, ‘The Snorri Sturluson Saga’, can be visited all year round. During the summer season, (1st May – 31st August), the opening hours are from 10 to 18 every day, and during the winter season, from 10 to 17 on weekdays and, if booked in advance, during weekends. – AMB