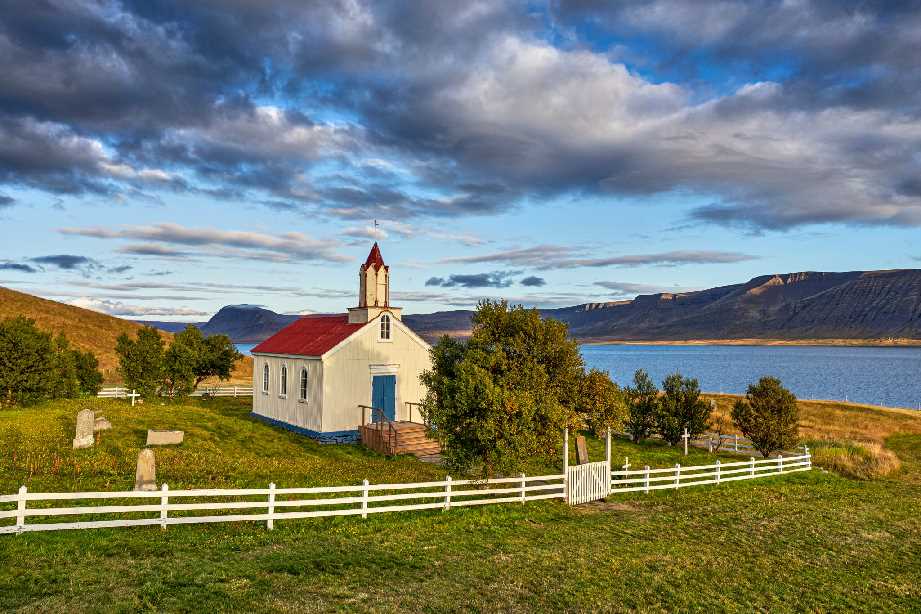 The church in Hrafnseyri was built in 1886 and protected in 1990. The master-builder Árni Sveinsson designed and built this beautiful wooden church clad in corrugated iron.

The land and history in Arnarfjörður

Where is the best weather in Iceland? It’s possibly in Arnarfjörður. In the village Bíldudalur, which is in the fjord, you can find the most calm weather days in all of Iceland. Opposite Bíldudalur, on the other side of the fjord, is the church site Hrafnseyri. The area has been inhabited since the settlement era. It is also the birthplace of Iceland’s independence hero, Jón Sigurðsson. He was born there on 17 June 1811. Another notable person from Hrafnseyri is Hrafn Sveinbjarnarson, who travelled from Iceland to Salerno in Italy to study medicine around the year 1200.
Late, he was then killed by his cousin Þorvaldur Vatnsfirðingur. The story goes that he was then buried under a stone monument by Hrafnseyri. From Hrafnseyri, it is a short distance to Lokinhamri and Dynjandi, the beautiful waterfall that falls into the fjord.