HB Grandi has signed a contract with Skaginn in Akranes and 3X Technology in Ísafjördur for a revolutionary new fish handling and fishroom system for Engey RE, Akurey AK and Viðey RE, the company’s three new wetfish trawlers. These agreements are based on HB Grandi’s long standing cooperation with these two suppliers in recent years. There are in fact two contracts, one for handling deck equipment, and the other for an automated tub transport system. The contracts are worth ISK 1 190 million.

The contracts are based on detailed research and development of handling deck and fishroom systems with the aim of achieving significant improvements in yield and quality, while also minimising costs and improving crew working conditions. The handling deck systems are designed with particular emphasis on facilities for utilising offal, liver and roes. 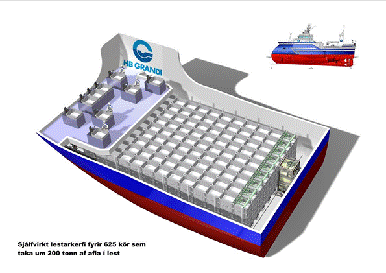 The main features of the handling deck systems are:
High capacity bleeding and gutting lines ensuring improved handling of the fish.
Analytical technology capable of automatically grading fish by species and weight.
A two-stage Rotex bleeding process that ensures effective bleeding and optimum quality.
A two-stage Rotex chilling process that retards rigor mortis onset to extent and improve freshness.
Automatic grading and a Rotex chilling process for redfish.
Handling and chilling for roe, liver and offal takes place in a Rotex process.
Fish to be placed in tubs and on the processing deck. 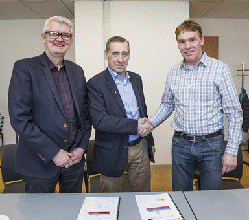 ‘The handling deck systems are based on our ongoing development of Rotex bleeding and chilling systems that most of the fleet now uses. Rotex technology ensures seamless and correct handling,’ commented Albert Högnason, product development manager at 3X Technology.

Automatic tub transport
A new and innovative automated transport system for tubs is expected to change catch handling significantly and to improve conditions and working practices for crew. This is a co-operative development project by the companies that has been designed with HB Grandi’s technical department and Nautic, which designed the trawlers.

Now that contracts have been signed, production can start on a prototype transport system and the time between now and the delivery of the first new vessel will be used to test it at Skaginn’s premises. The first new trawler, Engey RE, is scheduled to be delivered in the late summer of 2016. 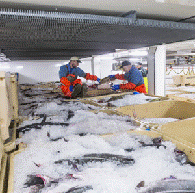 ‘It’s a huge commendation that HB Grandi has chosen our ambitious and in many ways revolutionary systems for its new vessels and this is a confirmation of our innovation and development work in recent years. We have long had a very fruitful relationship with HB Grandi, including in development, and that relationship has been confirmed with these contracts. We’re clearly doing something right,’ said Skaginn/ 3X Technology managing director Ingólfur Árnason.

‘Preparation for this project was completed by a task force at HB Grandi in a very professional and successful manner. The results are to be seen in these contracts and are completely in line with our ambitious fleet renewal. Improved quality, reduced costs and above all better facilities and working conditions for crews have been our primary aims in building these new vessels,’ said HB Grandi CEO Vilhjálmur Vilhjálmsson.

The new trawlers will feature facilities for filling and icing fish in tubs moved from the fishroom to the handling deck. This picture shows the old way of doing things and maybe we will not need any ice in the tubs due to possible super chilling of the fish on the handling deck.