The English Houses with History and Soul

The English Houses with History and Soul

Cosy, traditioinal family home away from home
It’s always nice to feel at home – even better, when you don’t have to do the cooking but can eat a delicious, traditional cuisine. Better still, when that home is in the Icelandic countryside, right by the Sjárvarfoss or ‘sea waterfall’, marking the point where the river’s fresh water meets the sea’s salt waters and where salmon leap on their way upstream! 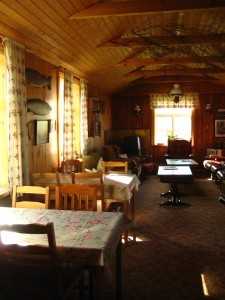 To call Ensku húsin (The English Houses) a guesthouse is to do it disservice. It has been family-run for three generations, with a fascinating history. Built in 1884 by a carpenter for his family, It became a fishing lodge when he moved to America. After being owned by the priest at Borg, the farm that was home to Egil Skalla-Grímsson, the warrior-poet who wrote his first poem whilst drunk at the age of 3, the Scottish Lord Oran Campell bought the house, river and fishing rights. On his death, an English lady bought it, she and her fishing friends coming each summer. It was named, ‘The English Houses’ out of respect for her. She was forcibly shipped home by the British ambassador after the war broke out and never returned, selling it to Geir Zoega, who had cared for it. He, in turn, sold it to a young farmer, Jóhannes Guðmundsson, whose family rebuilt it, turning it into a very comfortable guesthouse.

Open all year round, it’s an ideal place for individuals and families, celebrations or small conferences.
In summer, it’s a beautiful location to base from while exploring this rich and diverse area with its spectacular features and colourful history.

Contact Anna Dröfn by e-mail, or by telephone to reserve your place in history!