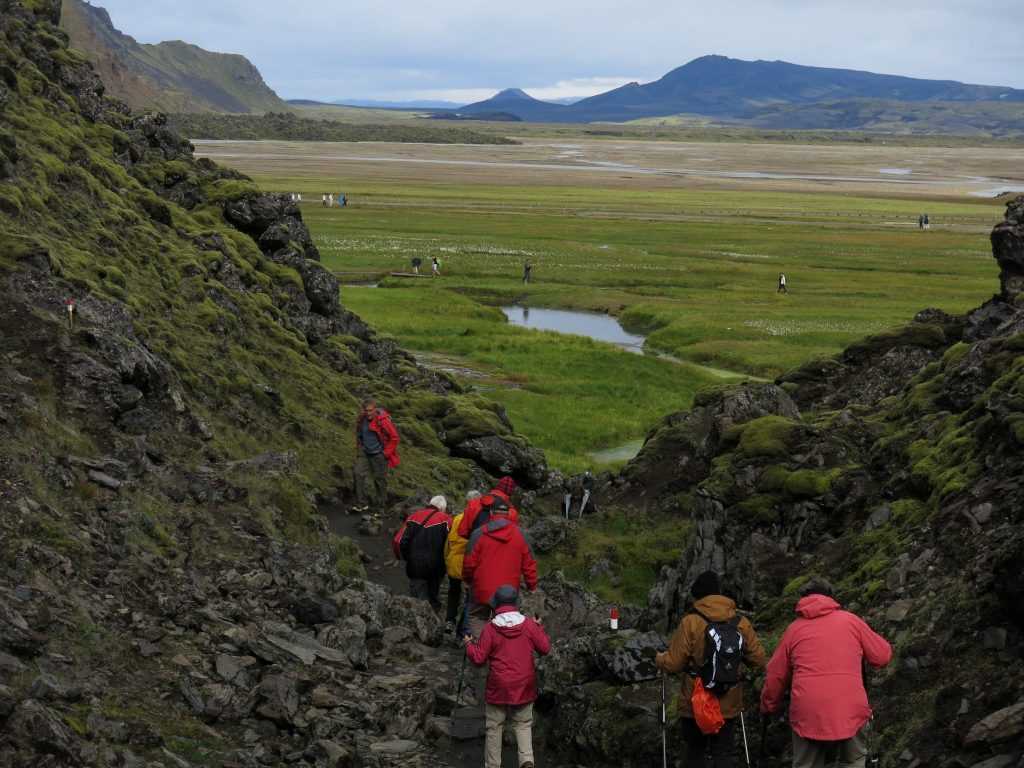 Continuing west the Ring Road passes through Síða and Fljótshverfi. It is well worth stopping at Núpsstaður, the easternmost farm in the Vestur-Skaftafell district. The landscape is awesome here, with strange rock formations towering above the farm. The chapel at Núpsstaður is small but beautiful, dating from the 17th century, with turf walls and roof, and a wooden gable at the front. Beyond Núpsstaður, the road continues past Lómagnúpur, one of Iceland’s most impressive cliff formations, 688 m high. Njál’s Saga recounts a dream dreamt by Flosi of Svinafell: he saw a giant emerge from the mountain at Lómagnúpur with an iron staff in his hand and call out the names of all those who participated in the burning of Njáll and his family at Bergþórshvoll. 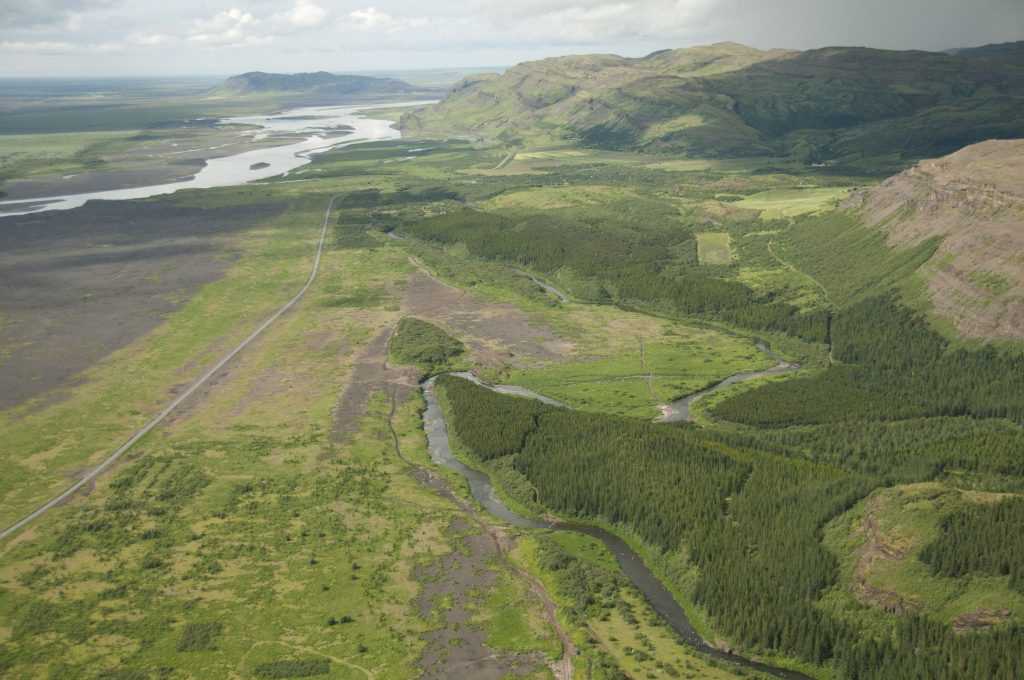 The road continues across Skeiðarársandur, the shifting sands below the glacier. Trusty bridges cross the rivers of Núpsvötn and Sand-gýgjukvísl. To one side is the Skeiðarárjökull glacier, wide and flat, while to the other is the North Atlantic Ocean. Straight ahead, the Örœfajökull ice-cap rises up, with its glacial tongues extending down into the lowlands: Skaftafellsjokull and Svínafellsjökull, with sharp-edged Hafrafell between them. To the left, the mountain Þumall (Thumb) stands out from the Skaftafell mountains and the peaks of Kristinartindar jut up from Skaftafellsheiði, while straight ahead is Hvannadalshnúkur, Iceland’s highest peak at 2,119 m. To the left, between two valleys, lies Skaftafell. This was an important manor for centuries, but since 1966 it has been a national park. 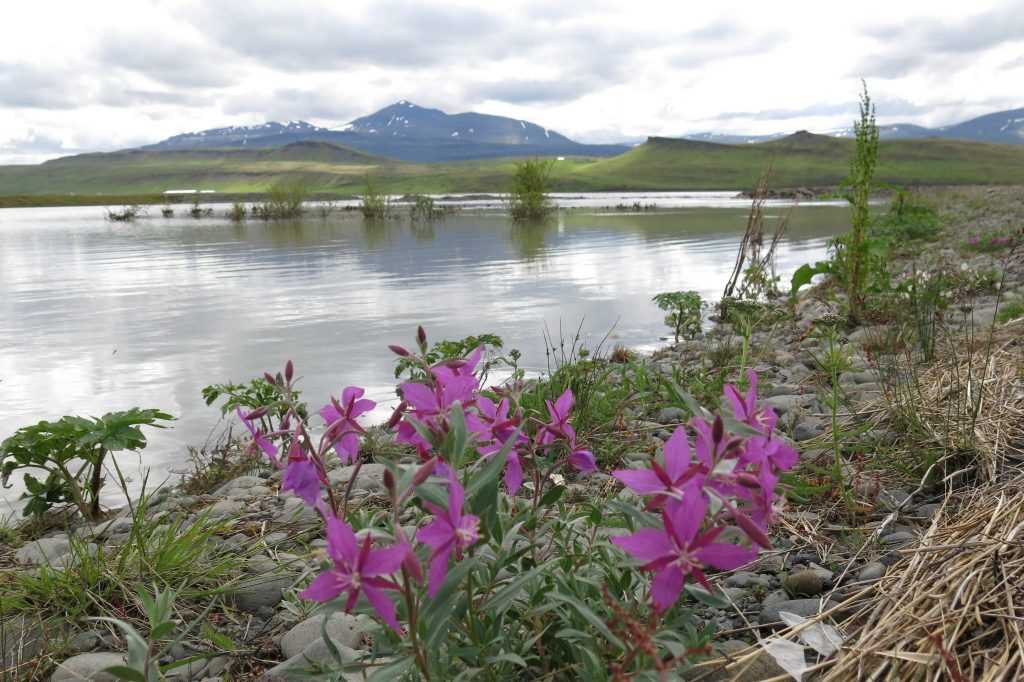 The bridge across the Skeiðará river is Iceland’s longest, at 904 m. A left turn leads to the Skaftafell service centre. The park rangers have their facilities here and the centre includes a shop and restaurant. There is also a campsite, where vegetation has been established on the formerly barren sands. Excellent footpaths lead from the service centre up into the woods. They pass two gullies, where fast-flowing streams plummet over waterfalls such as Heygötufoss, Þjófafoss and Hundafoss. The most beautiful of the waterfalls is Svartifoss (Black Falls), where the river cascades over a natural “vault” of columnar basalt. After this, the paths continue over Skaftafellsheiði to Sjónasker, which commands splendid views of mountain and glacier, streams and huge glacial rivers, wildflowers and birch woods, ocean and barren sand. Few places include such extraordinary contrasts in natural beauty.
It is well worth taking a walk over to the Morsdrdalur valley. Beyond it is the Bœjarstaðarskógur wood, where the birch trees flourish particularly well. The Morsárjökull glacier tumbles down at the head of the valley, giving rise to the fast-flowing Morsd river.
Tradition says that long ago the glaciers were much smaller than they are today, and that there was once a route that passed across the highlands through the middle of the Vatnajökull glacier. The farmer of Möðrudalur, north of the glacier, 170 km away as the crow flies but twice as far by road nowadays, is said to have had rights to cut trees at Skaftafell, while the farmer at Skaftafell had the right to graze horses at Möðrudalur. The shepherd at Möðrudalur was supposed to have his own bed at Skaftafell, and the Skaftafell shepherd at Möðrudalur, indicating that there was once frequent contact between the two farms.
Many renowned men have lived at Skaftafell, including a father and son in the 18th century who were famed for their scholarship and craftsmanship. They made guns, for instance, which were used to shoot seals and polar bears. They are also said to have made a four-wheeled vehicle with sails. They found many materials for their crafts on the shore, among debris washed up from shipwrecked vessels on Skeiðarársandur. The so-called gold ship Het Wapen van Amsterdam, a vessel sailing from India that ran aground in 1667, is reputed to have provided plenty of materials. The skill and knowledge of such men often gives rise to folk tales, suggesting that their skills were not entirely of this world; some of the Skaftafell farmers were supposed to be familiar with the troll-wives of the Skaftafell mountains:
Long ago there was a farmer at Skaftafell named Bjarni, who was an excellent craftsman. A troll-wife lived in a cave above the Skaftafell Woods. She was friendly towards Bjarni; she guarded his sheep in the mountains and his driftwood on the shore. One winter she said to Bjarni that a ship had run aground on the shore. All the men aboard were dead but one. The only survivor was a fearsome savage who would destroy all the south of Iceland unless he were slain. Then she took up an axe and went with Bjarni to the shore, where she did battle with the savage and slew him. This troll-wife lived for many human lifetimes and was amicably disposed towards Bjarni’s descendants. Her cave is said to exist today, with a window in the middle of the roof-ridge. The troll-wife’s bed is reputed to be cut into the rock, eight ells in length and two ells across [one ell is about 50 cm], Bjarni is said to have built the cave door and all the door fittings, so that the troll-wife would be comfortable there. 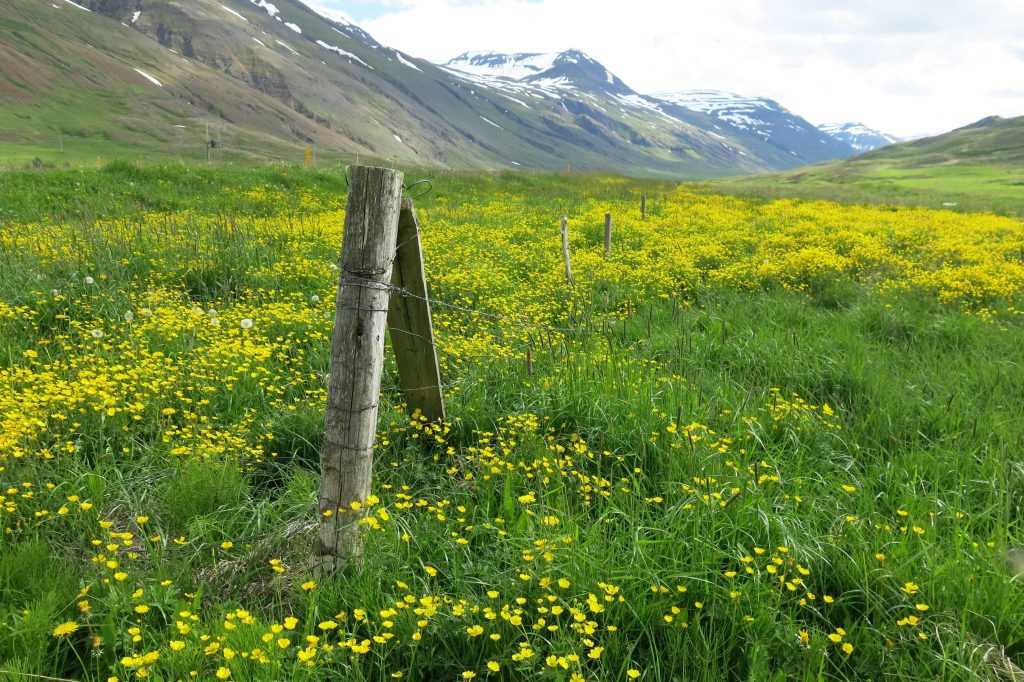 Einar was a renowned man who lived at Skaftafell in Öræfi. He is said to have known a certain troll-wife. Once, when Einar was travelling, he suddenly found himself in thick fog. He suspected that the fog was not entirely natural but made to lead him astray. So he took an axe that he had brought with him and threw it away. The fog immediately lifted and Einar continued his journey, reaching home safe and sound. Just after this, one of his horses collapsed. He found the axe, covered with blood, on a sill outside his farmhouse.
The following year, Einar was travelling and had to cross the Skeiðará river. Before he set off to ford the river, he saw a very large woman coming towards him. When they met she asked him for the loan of his horse to cross the river. Einar was reluctant; he said he was afraid she would overstrain the horse as she did last year. The troll-wife said that she had good reason for doing so, as Einar had played a prank on her. She said that when he threw his axe away it had struck her between the breasts and she showed him the scar it had left. Einar saw that she was telling the truth and he permitted her to ride a horse he was leading. They set off across the river and crossed safely.
It is said that the troll-wife teased Einar and that he said he wished to seek her out to be revenged. He went home and made a copper gun, which still exists at Skaftafell. A little later he went to find her. The troll-wife then made her peace with him and promised to do as he wished. Einar’s only demand was that she ensure against anyone stealing timber from his woods beyond the Morsá river.