On the 21st of July 2010 a revolution changed Vestmannaeyjar islands forever. It is on that day a new harbour opened on the otherwise harbourless south coast of Iceland. This is the harbour on Landeyjasandur. From the 21st of July ferries will cross the channel between the mainland and the islands at a regular interval, six times a day. The time of surface travel thus drops from the three hours the Herjólfur takes from Þorlákshöfn to Vestmannaeyjar, to 25 minutes. – A revolution indeed! 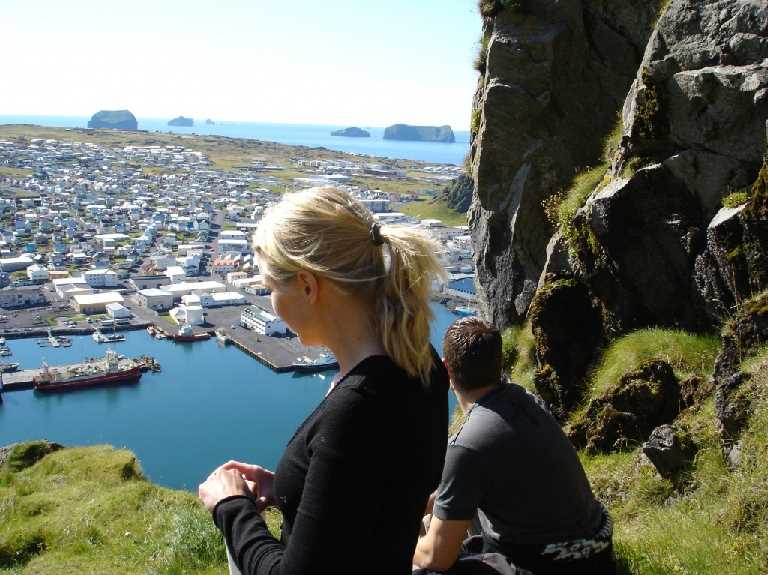 Preparations
The inhabitants of Vestmannaeyjar are anticipating big changes in their lives because of the new service. It will be much easier for them to come to the mainland and drive to any destination they wish to go to. The new harbour will be even more important for tourism in Vestmannaeyjar, as it will also become much easier to travel to Vestmannaeyjar. The islands are a beautiful and interesting tourist destination with a remarkable history, both natural and cultural, which in some cases has left dramatic marks on the town on Heimaey. Heimaey means Home Island. It is the biggest island in the archipelago of Vestmannaeyjar and the only one with permanent settlement. The inhabitants have been preparing for this change for a long time and are now ready to meet the challenge of a much larger stream of tourists than ever before.

Harbour or Tunnel?
After a long debate over how to improve transport links to Vestmannaeyjar, it was decided to build a harbour in Landeyjasandur. The road system on the mainland had improved considerably over the last 30 years or so, with paved roads becoming the norm over all the country, tunnels were bored under Hvalfjörður and through many mountains in the west, north and east to improve communications but during that time, nothing was done to improve transport links to Vestmannaeyjar. The islands were only served by a slow boat from Þorlákshöfn and flights from Reykjavík and Bakkaflugvöllur. Many lobbied for a tunnel to be dug between the mainland and the islands, and that possibility was explored extensively. In the end, it proved too difficult, too expensive and too dangerous to build a tunnel, so the harbour option was chosen.

The Landeyjarsandur Harbour
The harbour was built on the harbourless south coast. As there has never been a harbour there, the engineers simply cut into to shoreline and – behold! – there’s a harbour. This of course involved a very large engineering operation, piers had to be built and after the harbour opens sand must be continuously pumped out of the harbour. The ocean waves are very large and powerful there and constantly carry sand into the harbour. The piers were built using rocks from the now world-famous volcano of Eyjafjallajökull. The rocks were carried by giant lorries from the mountain and dumped in the ocean to form the gigantic piers necessary for the protection of the new harbour. 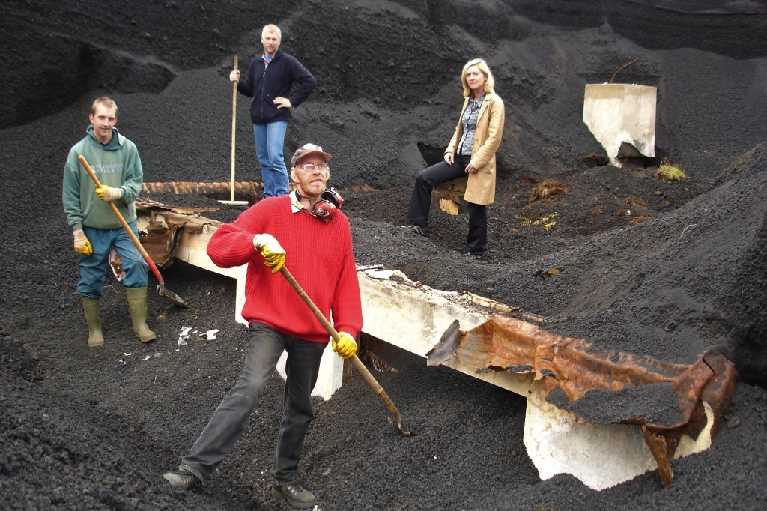 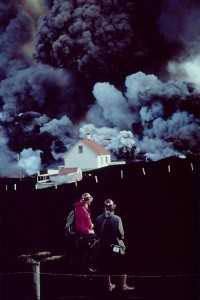 revolution. They have been preparing camping sites for those who wish to sleep in tents or campers. A totally new swimming pool has been built. This is one of the largest and most modern swimming pools in the whole country, and that is saying a lot, because Icelanders put a lot of effort into their swimming pools which are almost a national treasure. New cafés and restaurants have opened, and the golf course has been very much improved.

The Vestmannaeyjar Eruption of 1973
Vestmannaeyjar’s history is especially interesting. The most famous recent event is probably the volcanic fissure which opened right next to the town of Vestmannaeyjar on Heimaey in 1973. There were only a few hundred metres from the fissure to the houses that stood closest to it. Luckily, the fissure did not open directly under the town or the causalities might have been very high. All the inhabitants were able to flee the eruption in the large fishing fleet of the town, which had recently returned to shore. The eruption lasted for five months, and for a while, the lava threatened to close the harbour. A large cooling operation saved it and stopped the lava. The eruption increased the size of Heimaey, but it also buried 400 houses. 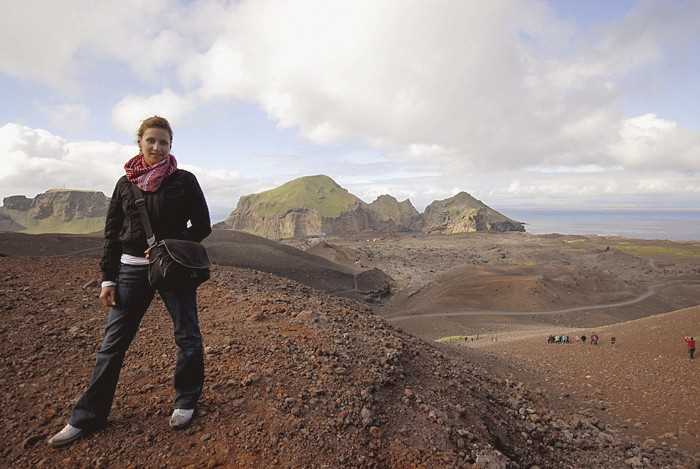 Pompeii of the North
Now a project called Pompeii of the north, called after the buried Italian town near Napoli, is under way. It involves the archaeological excavation of some of the houses buried under the ash and lava. The project entails creating a small village that will rise from the ashes of the disaster, giving visitors a chance to experience the effects of the awesome destructive force of a volcanic eruption. Some houses will be partially uncovered, while others will be completely uncovered and reopened for guests to visit. Already there have been signs put up next to each home, detailing its inhabitants and what the houses looked like. Even though the excavation has not yet been completed, it has been open for people to visit for some time now.

Fish, Fish and Fish
The three main occupations in the town Vestmannaeyjar, besides tourism, can be summed up in three words: Fish, fish and fish. From the 12th century onwards the islands have been coveted by the rich and powerful because of their location close to some of the richest fishing grounds in the world. In the 12th century, the powerful bishopric of Skálholt in Southern Iceland acquired the islands but in the 17th century, they became a port belonging to the monopoly trade of Denmark. Several hundred people used to reside in the islands, living off fish and husbandry.

The Raid of the „Turks“
In 1627, an even more traumatic event than the 1973 eruption occurred. Pirates from Algeria, led by a Dutchman who had converted to Islam, attacked the islands and enslaved part of the population. They were shipped to the city of Algiers on the south coast of the Mediterranean. 28 of them eventually returned, bought back by the Danish king. For a long time afterwards, a strong defence with cannon and guns was organised in Vestmannaeyjar, to prevent a repetition of these events. 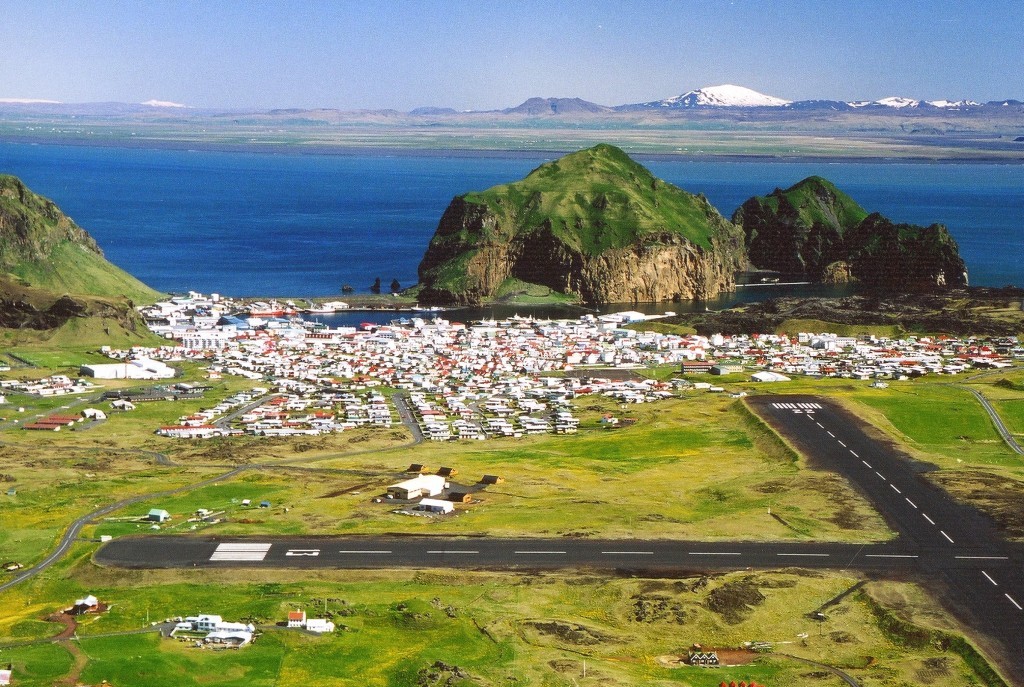 Modern Times
In the early 20th century, the population began to grow as export markets opened in foreign countries for salted cod. In the period from 1920-1940, the population of the islands exploded from a few hundred to several thousand. This was the classical motor-boat age, with a large number of wooden boats of 20-30 tons belonging to islanders. In the 1940’s, frozen fish became the staple produce instead of salted fish, but now production has moved out to sea on big factory trawlers. The town itself has quieted down a bit as a result, especially in the traditional ‘vertíð’ or fishing season of January-April, which used to be a very busy time. But now, of course, the islands will be busy again, thanks to the new harbour in Landeyjasandur.