1500 km on horseback in search of a lost fiancé 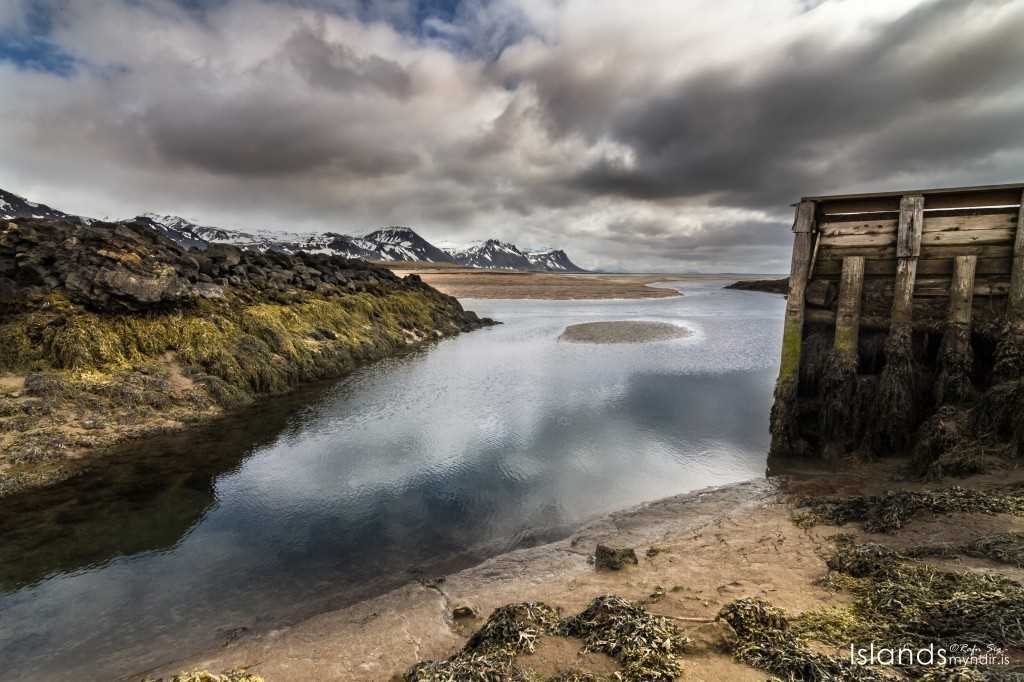 Enjoying a horseback riding trip into the Icelandic highlands can be exciting, and due to well organized service will be quite comfortable. It might also be a challenge, but if you follow instructions, it won’t be dangerous anymore.
When in 1908 the German lady Ina von Grumbkow came to Iceland in order to search for her fiancé, who was said to have drowned in lake Öskjuvatn, she learned that traveling in Iceland was unlike anything she had been experiencing before. However, during a test tour in the lava fields of the Reykjanes peninsula the determined lady showed that she was able to be on horseback for 12 hours – daily.

Loading Horses for the Trip
The expedition involved her fiancé’s friend, two Icelandic guides, and 20 horses – including eight riding horses and 12 packhorses, each of them loaded with two chests filled with 75 kg of food supplies and scientific equipment, such as cameras and instruments, others carrying the camping equipment, leaving one private chest per person. Loading and unloading the horses twice a day is considered as a hard job, as the chests had to be accurately weighted. Easy to imagine the mess before the departure! But German Ina showed enough humour to assimilate to the Icelandic way of being: „Forced by circumstance I gradually learned from my companions to remain silent when things didn’t work out straight.“ 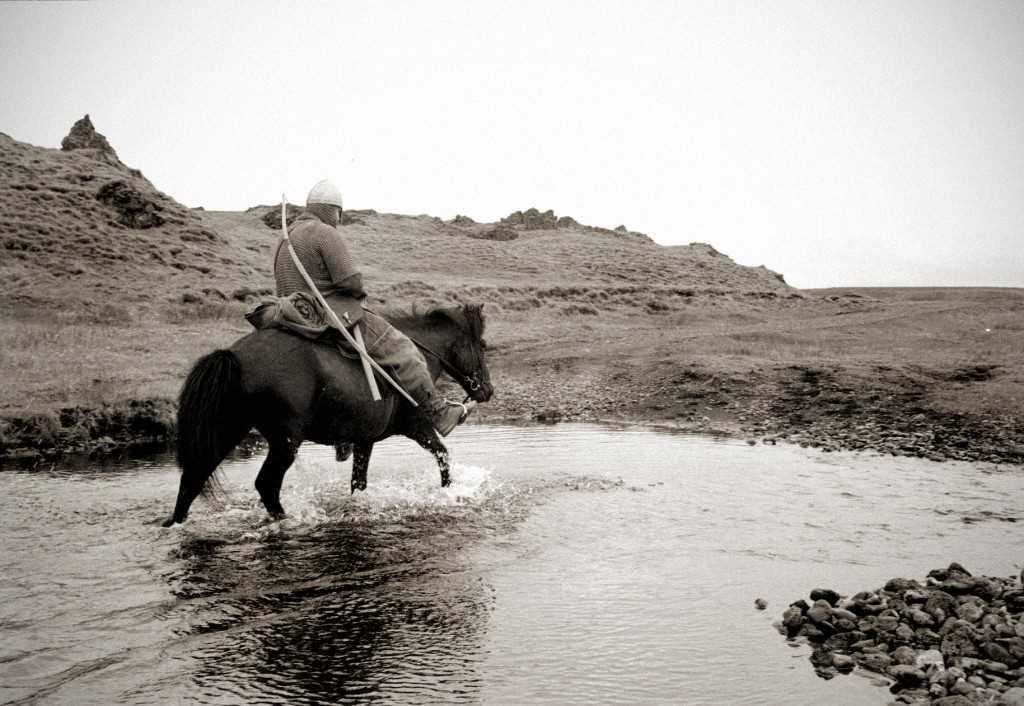 Crossing Rivers
Most parts of the highland were rather unknown at the beginning of the 20th century – Ina must have been quite an adventurous woman, since she agreed on exploring the vast lava fields at Laki in South Iceland, facing glacial rivers to be crossed. Any crossing of a river meant danger of losing lives or horses to the stream or by escape, when they ran away after reaching the banks.
Some rivers were insuperable, forcing the group to take time consuming detours. In 1783 the enormous Laki eruption had covered large parts of the country with lava and ash. Due to lack of grass the horses had to be sent back to farmland for the days the travelers would stay for scientific purposes in the middle of the lava desert.

Sprengisandur in Three Days
Uncertainty of glacial rivers also hampered a trip to Veiðivötn craters. Instead the group turned northwards, mastering the 150 km Sprengisandur route in three tough riding days, through a desert without any grass and barely any water. Reaching Akureyri, the group restored food supplies and organized the ride to Askja, which would take them through Iceland’s roughest part, the huge lava field of Ódáðahraun between Vatnajökull and Mývatn. Until the 19th century no one had ever traveled there.
A break was planned for mount Herðubreiður, fearing whether the oasis of Herðubreiðarlindir was still vegetated. In former times outlaws had survived at this hidden place of beauty, which today is a popular hiking spot. Luckily the horses found enough grass, before the group continued for the most arduous part of the whole trip: the walk through Askja’s lava fields. 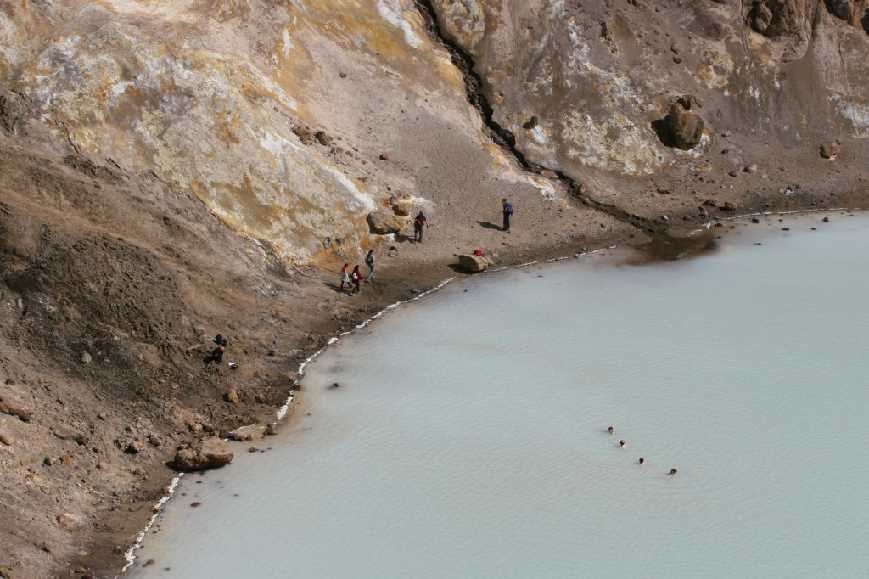 11 Days at Askja Desert
The volcanic eruption of Askja in 1875 is said to be one of the fiercest eruptions in Iceland since the settlement. The so-called ‘Askja-fires’ lasted until 1920. So the area where they chose to travel, was definitely not safe. However, the brave lady obviously enjoyed boiling mud pools, solitude and the incredible colours of volcanic activity, instead of fearing for her life during summer snowstorms or sulphuric emissions.
After having sent the horses back, Ina and her companions spent 11 days in the complete solitude of the Askja desert, exploring sulphur-stinking craters and hunting for traces of Ina’s fiancé, who had ventured on a boat trip on lake Öskjuvatn and obviously drowned. They were not successful.
“Time seems to stand still,” she mournfully told her diary, however, admiring the “royal sepulchre that only few are bestowed on.”

A Touch of Eternity
Instead of taking the boat from Akureyri back to Reykjavík, the group decided to join the postman on his hazardous ride southwards, again through raging glacial currents and life-threatening swamps. Ina von Grumbkow reached Reykjavík on the 6th of September, after 11 weeks and 1500 km of riding, crossing 100 rivers.
She had not been able to discover the circumstances of her fiancé’s death, and suspicion lived on, that the scientists had probably been murdered by a surviving companion. “We had been searching in vain for material remnants,” Ina notes. “But we learned how to feel a touch of eternity.”