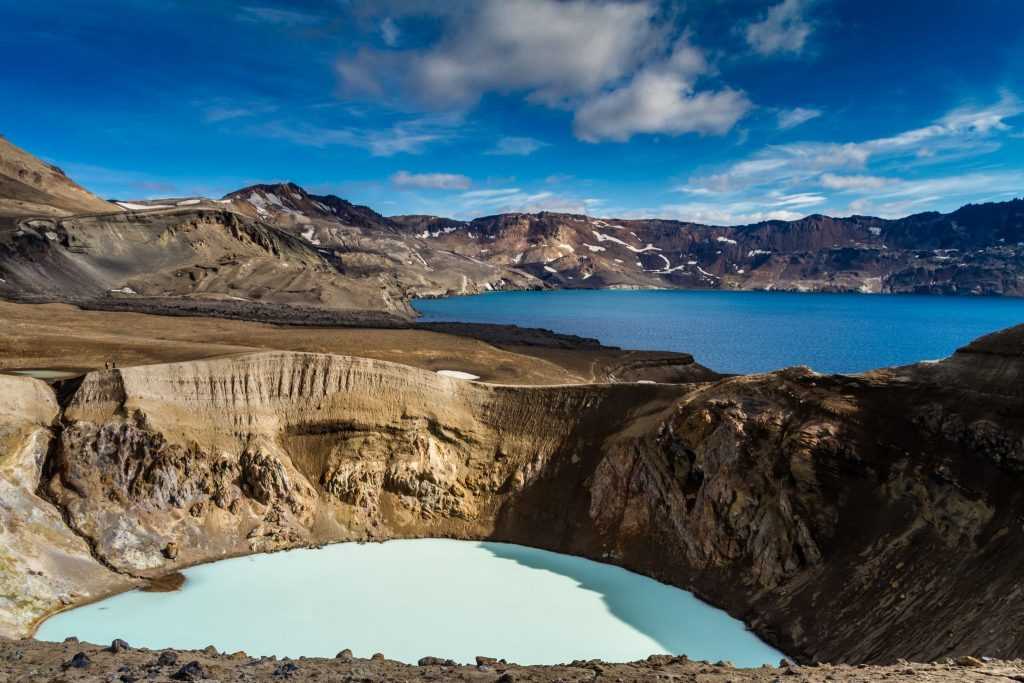 Askja and Víti are among the best known natural phenomenons in Iceland.

A formidable creation of nature

Where should one go to explore one of the most distinctive and stately representative of Icelandic central volcanoes, ornated with a caldera? To the Dyngjufjöll mountain complex (1,510 m) and Askja. Dyngjufjöll form huge dome-shaped highlands. The structure is a central volcano, built up by repeated eruptions for at least 200,000 years. It is an activity centre in a volcanic system which is 150 km long and 5-10 km wide and termed the Askja Volcanic System. The system represents a true rifting zone volcanic area, located on the margins of two plates that move away from each other at an average rate of 2.0-2.5 cm per year in Iceland. The Dyngjufjöll massif contains three circular depression or calderas. They are hidden from view as one approaches Dyngjufjöll. The main caldera is large (45 sq. km), relatively new (10,000-20,000 years old) and still in the making. It is named Askja. An older, somewhat smaller caldera, is less distinctive in the landscape. The smallest and youngest caldera contains the deepest freshwater lake in Iceland, Öskjuvatn (220 m). The lake basin started to form when an area within the main caldera began to subside as a powerful tephra (ash and pumice) eruption terminated in 1875. The event was a part of a volcano-tectonic epsidode including the lava-producing Sveinagjár eruptions 1874-1875 north of Askja. The lake basin deepened and became filled with groundwater in a few years. The crater Víti formed immediately after the main tephra eruption.

An Askja-type caldera forms above a deep-seated magma source, called a magma chamber, when a part of the roof above the magma mass subsides; sometimes just slowly due to pressure changes in the chamber, but sometimes rapidly during or after volcanic eruptions due to a part of the magma being removed (as in 1875).

When exploring the Askja Volcanic System the long history of tectonic movements and volcanic eruptions becomes evident but the system has been rather quiet during the better part of the last millennium. Prior to that, enormous tephra eruptions occurred in Dyngjufjöll 10,000-11,000 years ago and numerous lava eruptions then followed. A few lava shields rose in the surrounding lava fields; like the voluminous Kollóttadyngja 1,180 m) which has a volume of 15-20 billion cubic metres. This, along with the associated lava flows, is sufficient to to build a 1,500 to 2,000 km long, 100 m wide and 100 m high wall! The volcanic actvity gradually diminished with time.

In the 20th century, however, a series of eruptions and tectonic events riddled the Dyngjufjöll volcanic centre. Small lava eruptions occurred in the caldera in March 1921, November 1922, December 1922 and in February 1923. In 1924, 1927 and 1927 sightings of eruptions south of Askja were reported in newspapers but no one went to survey the sites. Substantial lava may have flowed somewhat smilar to the lava flows of the Sveinagjár eruptions in the 19th century. In 1926 tephra shot out of Lake Öskjuvatn. A small island crater is still visible in the lake; a small version of the tephra islands that were built during the Surtsey eruption off the south coast almost 40 years later. 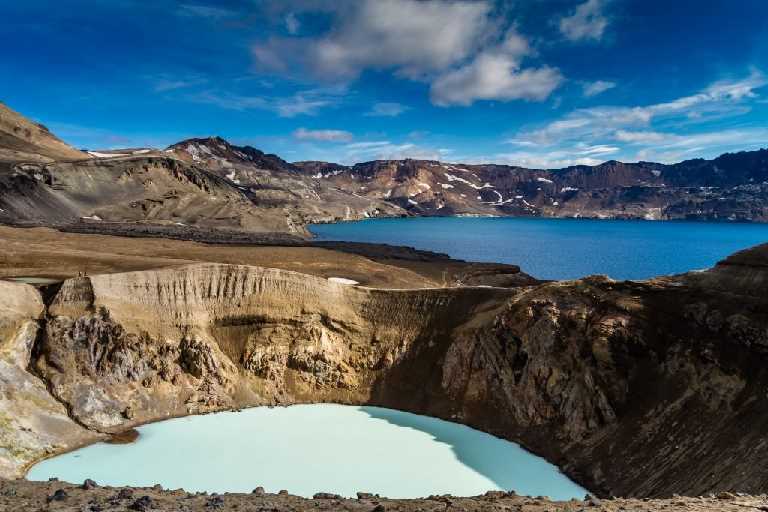 Askja and Víti are among the best known natural phenomenons in Iceland.

After a burst of earthquakes in October 1961, lively solfataras started to erupt in the Öskjuop caldera pass. Around noon on October 26th more earthquakes in Dyngjufjöll were registered and around 14.30 a high eruption cloud rose into the air and was seen from many locations in Northeastern Iceland. An eruption on an 800-1,000 m-long eruptive fissure had already started. The fissure almost lines the caldera fault in Öskjuop. The highest of four lava fountains attained an impressive height of 500 m. The lava discharge was estimated at 600-1,000 cubic metres per second but it soon slowed down. Two large main craters, Austari- og Vestari Borg delivered most of the lava. Today they greet the eye as 20-30 m high and rather wide scoria and spatter cones. In early November, the mode of eruption changed. Lava spatters and shimmering lava ponds illuminated the craters and more lquid ropy lava (pahoehoe), flowing in open channels and tubes, covered the older lava. On the 15th of November, a new crater, Stakaborg, opened up south of Austari- og Vestari Borg, and that crater outlasted the old ones. The eruption was over by the first week of December. The new basalt lava covers an area of 11 sq. km but the volume comes close to 0.1 cubic kilometre (100 million cu. m) and, in addition, some 4 million cu. m. of tephra fell to the ground close to the site. The volcanic fissure is called Vikraborgir and the mixed scoria and the lava flow is called Vikrahraun. The eruption became the first effusive eruption (predominantly lava production) in Iceland that geoscientist could monitor and investigate.