A growing number of airlines are offering connections to Keflavik International Airport (KEF). Below is information on each airline as well as a link to their website. 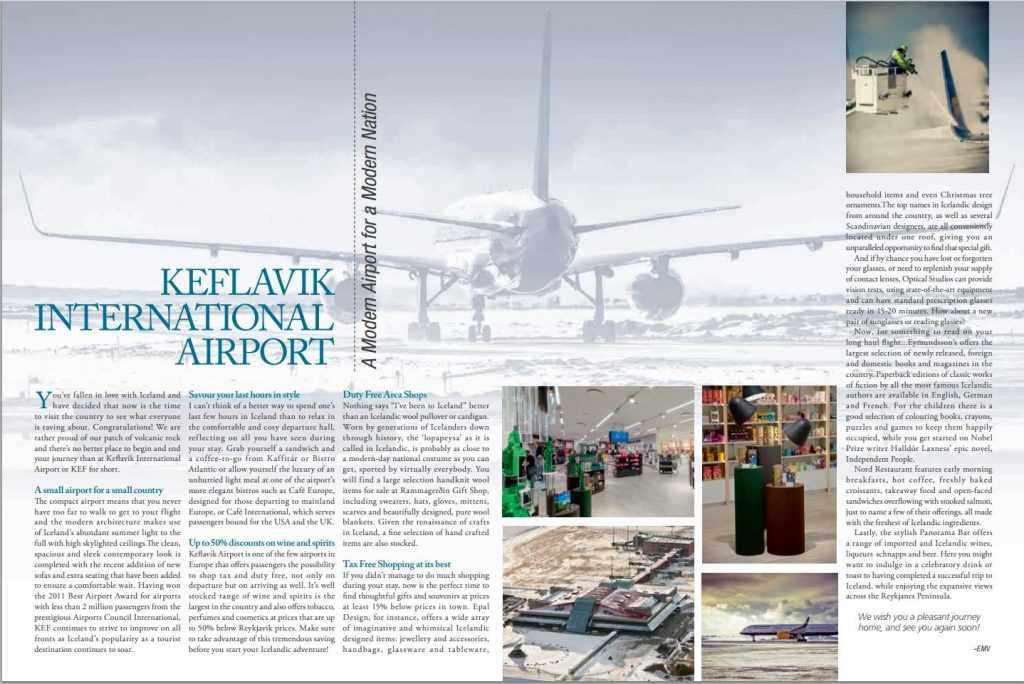 Icelandair
Icelandair is the international airline of Iceland, currently operating flights to countries on both sides of the Atlantic Ocean out of its hub at Keflavik International Airport. The airline connects 27 gateways in Europe with 16 gateways in North America, through Iceland as a hub.
www.icelandair.com

Wow Air
WOW air is an Iceland-based low-fare and high-performance airline that was founded in 2011. WOW serves 30 destinations across Europe and North America and is committed to providing the cheapest flights to and from Iceland.
www.wowair.com

Air Greenland
Air Greenland is Greenland’s national airline, offering flights to, from and within Greenland. Founded in 1960, its fleet consists of 35 fixed-wing aircraft and helicopters—ranging from the large Airbus 330-200 to small AS 350 helicopters. The governments of Greenland and Denmark as well as SAS GROUP jointly own the airline.
www.airgreenland.com

Airbaltic
Airbaltic connects the Baltic region with 60 destinations in Europe, the Middle East, and CIS countries. The airline, which was established in 1995, has received international awards for excellence and punctuality.
www.airbaltic.com

Air Berlin
Air Berlin, which is Germany’s second largest airline, operates an extensive network including destinations throughout Europe, North Africa, Southeast Asia, the Caribbean and the Americas. The airline concentrates on serving major German and European cities and a total of 23 German cities are served.
www.airberlin.com

Austrian
Austrian Airlines is the Austrian flag carrier, headquartered in Vienna. The airline operates flights to more than 130 destinations. Its hub is Vienna International Airport, and it’s a member of the Star Alliance.
www.austrian.com

British Airways
British Airways is the United Kingdom’s flag carrier and its largest airline, based on fleet size. The airline is based in Waterside near its main hub at London Heathrow Airport. British Airways serves more than 160 destinations, including six domestic destinations. It is one of the few airlines to fly to all six permanently inhabited continents.
www.britishairways.com

Czech Airlines
Czech Airlines is the national airline of the Czech Republic, based at Václav Havel Airport Prague in Ruzyně, Prague. The airline currently flies to more than 80 destinations in 45 countries including European cities like Amsterdam, Barcelona, Copenhagen, Stockholm, Madrid, Milan, Paris, London and Rome.
www.czechairlines.com

Delta
US Delta airline operates an extensive domestic and international network serving all continents except Antarctica. Delta and its subsidiaries operate more than 4,000 flights every day and it’s the oldest airline still operating in the United States and is the world’s largest airline in terms of fleet size.
www.delta.com

EasyJet
British airline EasyJet carries more passengers than any other United Kingdom-based airline, operating domestic and international scheduled flights between 118 European, North African, and West Asian airports. The airline has 19 bases across Europe, the most important being at Gatwick. It is the second-largest low-cost carrier in Europe, after Ryanair.
www.easyjet.com

Edelweiss Air
Edelweiss Air is a Swiss airline owned by Swiss International Air Lines and the Lufthansa Group. From its base at Zurich Airport, it operates flights to European and intercontinental destinations. Founded in 1995, Edelweiss flies to more than 50 destinations.
www.flyedelweiss.com

Evelop
Evelop Airlines, branded as evelop!, is a Spanish airline based at Palma de Mallorca Airport. The airline operates flights out of Spain on behalf of tour operators. It is owned by Barceló Viajes and is a subsidiary of Orbest, an airline bought by the Barceló Group in 2013.
www.evelop.com

Germania
Germania is a privately owned German airline with its headquarters in Berlin. The airline operates flights to destinations in Europe, North Africa and the Middle East from several German airports. It carries more than 2.5 million passengers a year.
www.flygermania.com

Germanwings
Germanwings is a budget airline based in Germany that is owned by Lufthansa. The main German airports offering flights are: Cologne Bonn Airport, Stuttgart Airport and Berlin-Schönefeld Airport. Germanwings flies to more than 85 destinations.
www.germanwings.com

Iberia Express
Iberia Express is a Spanish budget airline owned by Iberia, which operates flights from its parent airline’s Madrid hub. The airline began operating in 2012 and flies to European destinations including Iceland, France, Denmark, Italy, Norway, and others.
www.iberiaexpress.com

Lufthansa
Lufthansa is the flag carrier of Germany and the largest airline in Europe in terms of the number of passengers carried. The airline operates flights to 18 domestic destinations and more than 200 international destinations in 78 countries across Europe, Asia, Africa, and the Americas. With more than 700 aircraft, Lufthansa has the second-largest passenger airline fleet in the world.
www.lufthansa.com

Luxair
Luxair is the flag carrier airline of Luxembourg with its headquarters and home base at Luxembourg Findel Airport in Sandweiler. The airline operates scheduled flights to destinations in Europe, North Africa, the Mediterranean and Middle East with additional charter and seasonal flights. It is Luxembourg’s only passenger-carrying airline.
www.luxair.lu

Niki
Niki is an Austrian budget airline and a subsidiary of Air Berlin that is headquartered at Vienna International Airport. The airline operates flights to European cities and holiday destinations including Iceland, Denmark, France, Greece, and Spain, among others.
www.flyniki.com

Norwegian
Norwegian is a budget carrier, and the second-largest airline in Scandinavia. It offers a domestic flight schedule within Scandinavia and to business destinations like London, as well as service to international destinations. The airline has bases at Copenhagen, Oslo-Gardermoen, Stockholm-Arlanda, Helsinki-Vantaa, Bergen, Trondheim, Stavanger and Sandefjord.
www.norwegian.com

Primera Air
Primera Air is a Danish Airline that has its headquarters in Copenhagen. Originally it was established in Iceland and today offers flights from Scandinavia to more than 70 destinations in Europe, the Mediterranean, Asia, and the Caribbean. In 2009 Primera Air established the subsidiary Primera Air Scandinavia.
www.primeraair.com

SAS
Scandinavian Airlines (SAS) is the flag carrier of Denmark, Norway and Sweden, and the largest airline in Scandinavia. The airline operates flights to more than 90 destinations. The airline’s main hub is Copenhagen Airport, which is the main European and intercontinental hub. Somewhat smaller hubs are Oslo Airport, Gardermoen and Stockholm-Arlanda Airport.
www.flysas.com

SunExpress
SunExpress is a Turkish airline based in Antalya. The airline operates scheduled and chartered passenger flights to various destinations in Europe, Asia and North Africa including Iceland, Germany, Demark, Belgium, and Morocco, among others.
www.sunexpress.com

Transavia
Transavia.com is a Dutch-based budget airline operating as an independent part of the Air France-KLM group. Its main base is at Amsterdam Airport Schiphol while Rotterdam The Hague Airport (RTM), and Eindhoven Airport (EIN) are its secondary hubs.
www.transavia.com

Vueling
Vueling Airlines is a Spanish airline headquartered in Barcelona and its name is derived from the Spanish word ‘Vuelo’, which means flight. Vueling flies to more than 100 destinations in Europe, Africa, and Asia and is the second largest airline in Spain.
www.vueling.com

Wizz Air
Wizz Air is a Hungarian budget airline with based in Budapest. The airline serves many cities across Europe, Israel and the United Arab Emirates. Destinations include Iceland, Denmark, France, Bulgaria, and Norway, among others. It has the largest fleet of any Hungarian airline, although it is not a flag carrier, and the airline currently serves 35 countries.
www.wizzair.com