The Krafla eruption 1975 began in the morning of December 20 near Leirhnjúkur in the Krafla caldera, near Mývatn. This place is a well known volcanic area, a part of the active volcanic zone of Iceland, as is shown on the map on page 120. This long lasting Krafla eruption from 1975 to 1984, with some shorter or longer intervals between single eruptions, is very similar to the so called Mývatn-fires which took place in the same area 1724-1746, also with several single eruptions and shorter or longer intervals between. The Mývatn period of eruptions started ivith a great explosive eruption on the slopes of the mountain Krafla. Then a big explosive outer, Víti, luas formed. Picture above shows Víti, as it looks today, with the mountain Krafla in the background. Above is a view from Leirhnjúkur in the Krafla caldera towards the north, showing a cluster of fissures and craters created by several Krafla eruptions. The crater in the foreground has just been formed. It goes by the name of Hóffell.

Sometimes steam vents and mud pots are formed in volcanic craters after an eruption has come to an end. The mud pots in the picture below were formed at Leirhnjúkur after the end of the eruption there on September8 1977. Steam vents and fumaroles are also frequently forerunners of volcanic eruptions, emerging on spots where eruptions may materialize later. 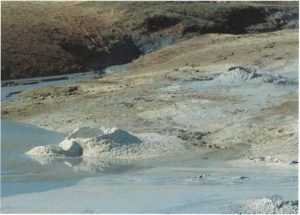 Large clusters of fissures are characteristic of the Mývatn/ Krafla area. Such fissure swarms extend in a north-south direction, consisting of open fissures, dislocation and crater rows. Since the ice age, there have been three main periods of eruptions in the Mývatn area. The first is called the Ludent period, which ended about 6000 B.C. The Hverfjall period of eruptions lasted from 2000 to 1500 B.C.

The beginning of the third period of eruptions came with the so-called ‘Mývatn Fires’ from 1724 to 1729, and a single eruption in 1746. The recent series of eruptions, called Kröflueldar, or ‘Krafla Fires’, which began in 1975, are con¬sidered to be a continuation of the Mývatn eruptions, and the sequence of events has been very similar.

The following is a short history of the Mývatn Fires as their comparison with the Krafla Fires is of great interest. There are contemporary sources of information about the events in the writings of Jón Sæmundsson, the parish priest at Reykjahlíð. The period of eruptions began with a violent explosive eruption on the slopes of Mt.Krafla in the morning of May 17 1724. An explosive crater, later known as Víti, came into being (seep.215). There were also several smaller craters, including Lida Víti (seepp. 112-113). The canyon now known as Hveragil is believed to have been formed at the same time.