Iceland is the 19th largest fishing nation globally and number three in Europe, after Russia and Norway. In terms of per capita, it is by far the largest in the world, after the Faroe Islands, as the country catch measures just over a million tonnes of fish a year.

The stern trawler Bergur VE 44 (pictured) was built in Denmark 23 years ago and arrived in the Westman Islands from Norway 6 years ago. Bergur is 36 metres long and 569 GT (Gross ton) in size. It was being repaired in the boatyard in Reykjavík recently. Vísir, the Grindavík fishing company, bought the trawler from the Westman Islands, to be delivered to the company shortly. Forty-six trawlers fish around Iceland, but they are by far the largest fishing vessels fishing in the Icelandic fishing jurisdiction. There are 649 other fishing vessels, according to Statistics Iceland. 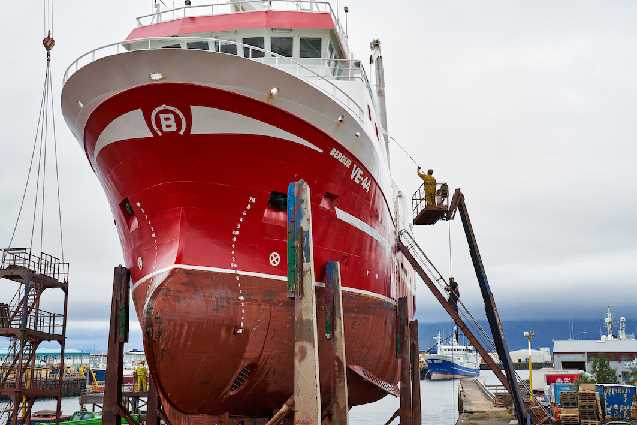 It is so lively to have a workplace like the Boatyard in Reykjavíkurhöfn in the middle of the city.