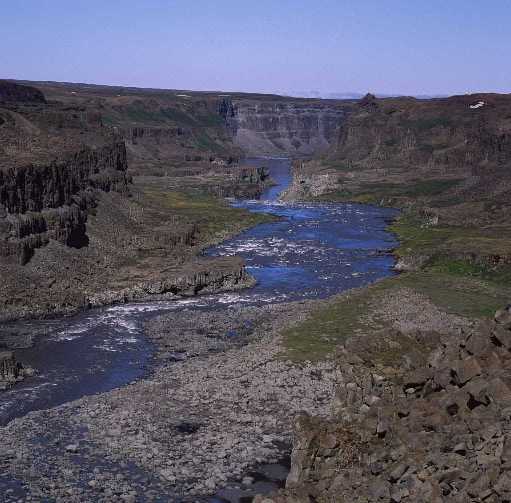 Jökulsárgljúfur National Park is a former national park situated in the north of Iceland around the river Jökulsá á Fjöllum. It lies to the north of the Dettifoss waterfall. On 7 June 2008, it became a part of the larger Vatnajökull National Park. The area is of interest because of its chaotic canyon and volcanic mountains. Eight thousand years ago, a volcano erupted directly underneath the river and glacial ice. This caused explosions and chaotic flooding.

Summer in the North is characterised by the midnight sun. You can play golf, go seal and whale watching, horse riding, hiking, swimming, fishing, river rafting, bird-watching, camping or simply enjoy the disparate forms of nature. The region wears a different coat in winter, when you can ride horses on the frozen lakes in Mývatn under the Northern Lights or ski the slopes just minutes from Akureyri town centre. The town is known as the winter sports capital of Iceland. 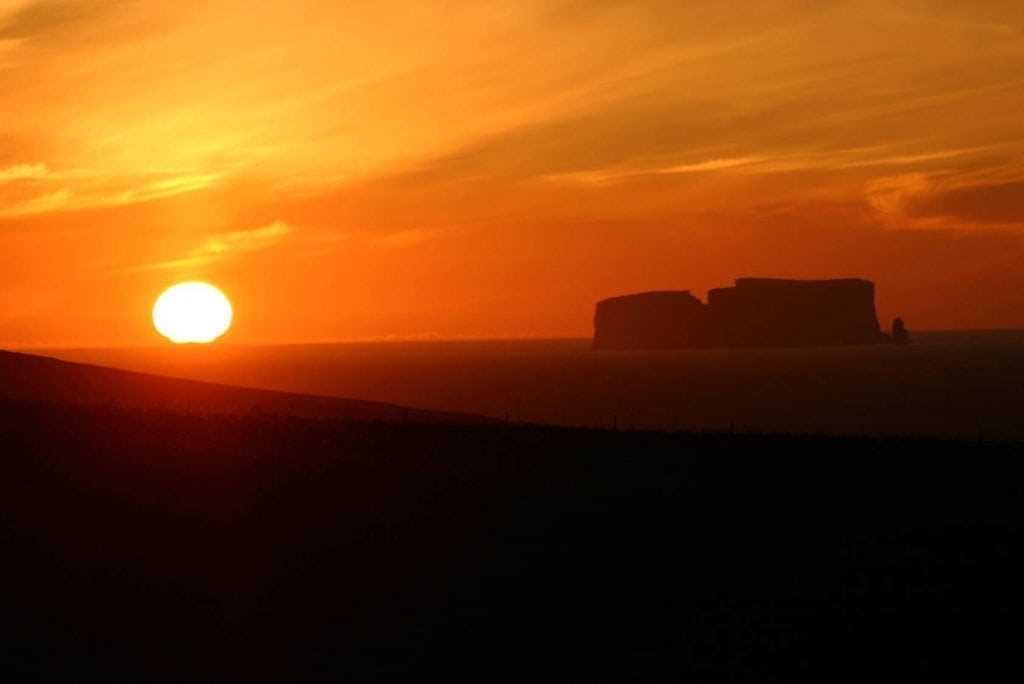 Drangey or Drang Isle, with its steep sea cliffs, towers majestically in the midst of Skagafjörður fjord in Iceland. The island is the remnant of a 700,000‑year‑old volcano, mostly made of volcanic tuff, forming a massive rock fortress. It was first mentioned in the Icelandic classic Grettis saga as being the refuge of the outlaw Grettir, who spent his last years there with his brother Illugi and his slave Glaumur. He fled there with his two companions when enemies were seeking his life because of its high, impervious cliffs. It is described as having a flock of 80 sheep, and many birds nesting on the cliffs. In late autumn of 1031, Grettir was assassinated where he lay virtually dying in his shed on the island. Þorbjörn Öngull and his men were the perpetrators.

Northern Iceland is probably Iceland’s most diverse region—in every sphere. Nature varies from the mystical area around Mývatn Lake, a birdwatching paradise, to the awesome horse-shoe canyon of Ásbyrgi, the thunderous waterfalls at Goðafoss and Dettifoss, Askja’s calderas and volcanos, or islands like Drangey, to name a few. Tours to the Highlands are unforgettable. 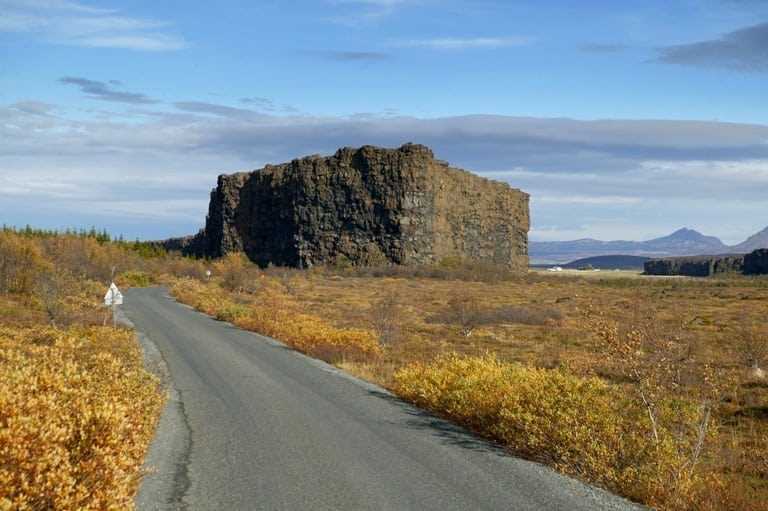 Ásbyrgi canyon lies in the north of Iceland, about 50 minute drive to the east from Húsavík on the Diamond Circle road. The horseshoe-shaped depression is part of the Vatnajökull National Park and measures approximately 3.5 km in length and over 1 km wide. For more than half of its length, the canyon is divided through the middle by a distinctive rock formation 25 meters high called Eyjan (“the Island”), from which a vast landscape is seen.

The region is bursting with vibrant history, just waiting to be enjoyed. Museums are found in almost every town, with fascinating insights into fields such as the seals at Selasettur in Hvammstangi or the Whale Museum in Húsavík to the turf house of Glaumbær farm in Sauðárkrókur, also home to the Museum of Prophecies and known as the country music capital of Iceland. Close by is Hólar, formerly the bishop’s seat and site of the first printing press. Siglufjörður hosts the Folk Music and Herring museums. Blonduos has several museums, as does Akureyri, the largest town of the north, along with its art galleries and rich culture. 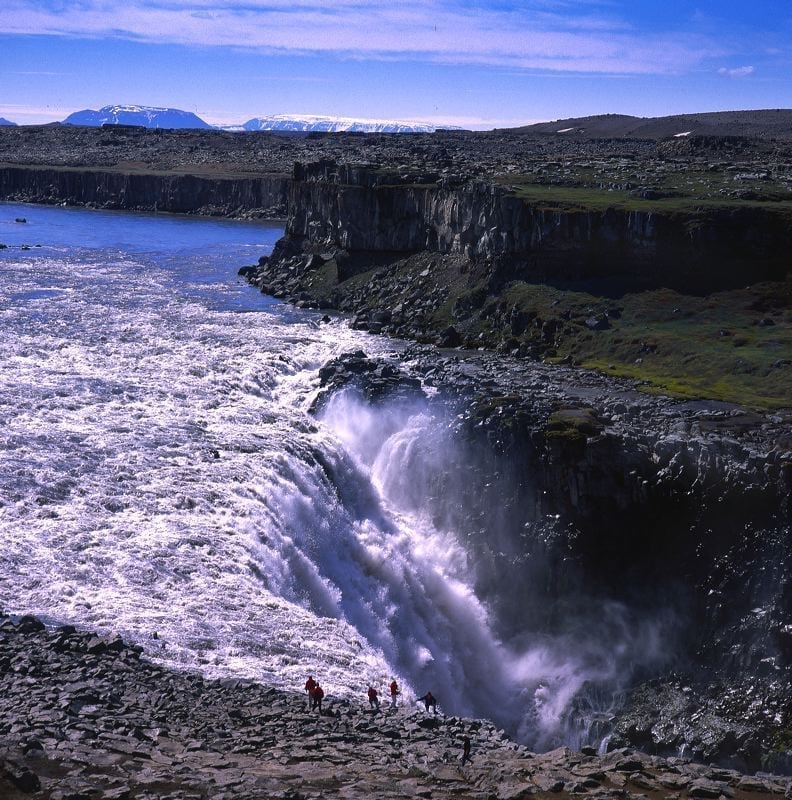 Dettifoss is a waterfall in Vatnajökull National Park in Northeast Iceland, and is reputed to be the most powerful waterfall in Europe. The water comes from the nearby Vatnajökull glacier, whose sediment-rich runoff colors the water a greyish white. The superlative of “most powerful” comes from its water flow times its fall distance. The water of the wide Jökulsá á Fjöllum river falls for more than 44 metres, causing a massive, crashing spray. 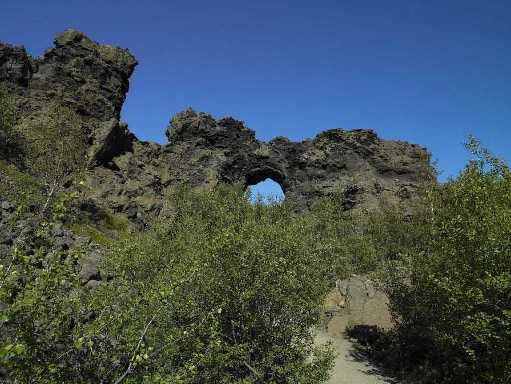 Dimmuborgir (dimmu “dark”, borgir “cities”[1] or “forts”, “castles”); pronounced [ˈd̥ɪmːʏˌb̥ɔrg̊ɪr̥]) is a large area of unusually shaped lava fields east of Mývatn in Iceland. The Dimmuborgir area is composed of various volcanic caves and rock formations, reminiscent of an ancient collapsed citadel (hence the name). The dramatic structures are one of Iceland’s most popular natural tourist attractions. 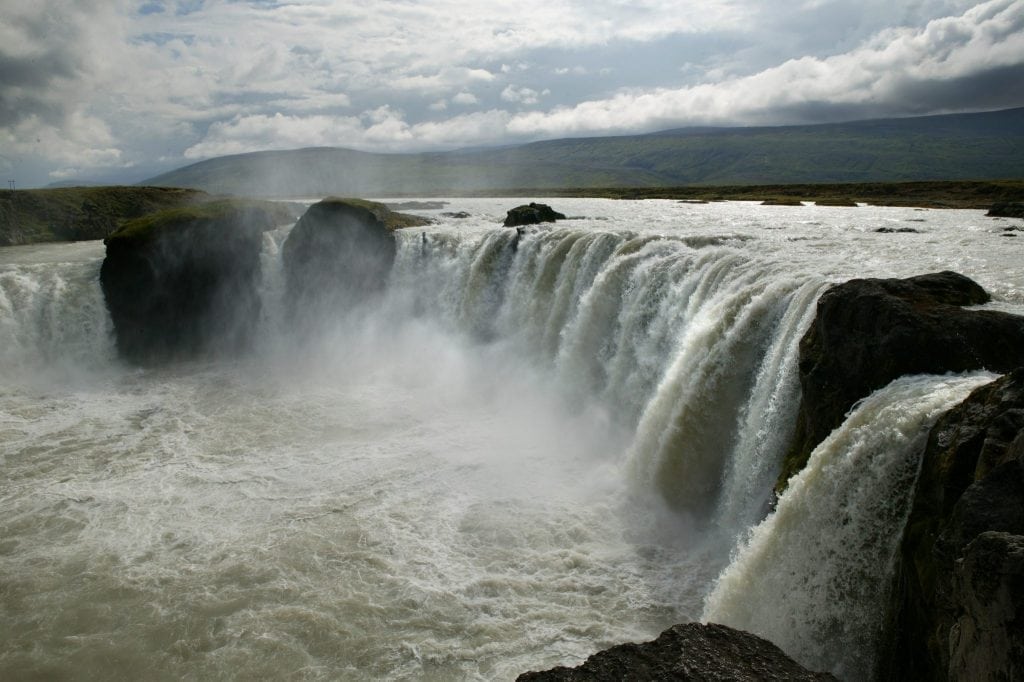 The Goðafoss (Icelandic: “waterfall of the gods” or “waterfall of the goði”) is a waterfall in Iceland. It is located in the Bárðardalur district of Northeastern Region at the beginning of the Sprengisandur highland road. The water of the river Skjálfandafljót falls from a height of 12 meters over a width of 30 meters.The river has its origin deep in the Icelandic highland and runs from the highland through the Bárðardalur valley, from Sprengisandur in the Highlands. In the year 999 or 1000 the lawspeaker Þorgeir Ljósvetningagoði made Christianity the official religion of Iceland. According to a modern myth, it is said that upon returning from the Alþingi, Þorgeir threw his statues of the Norse gods into the waterfall.The story of Þorgeir’s role in the adoption of Christianity in Iceland is preserved in Ari Þorgilsson’s Íslendingabók. “Íslendingabók”, however, makes no mention of Þorgeir throwing his idols into Goðafoss. A window in Akureyrarkirkja, the Cathedral of Akureyri, illustrates this story.