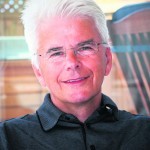 -The Reykjanes peninsula is home to a multitude of geological phenomena

The Reykjanes peninsula is the home of many spectacular attractions. The geographical phenomena are plentiful; seemingly endless lava fields, mysterious caves and colorful geothermal activity, all of which are supported by a booming service industry. Kristján Pálsson, director of the Reykjanes Tourism Board, says that in recent years efforts have been made to make this seemingly hostile landscape accessible to those interested in its many wonders. Visitors can enjoy multiple walking paths, bird watching, explore museums which explore the areas rich history and culture, exhibitions which explain the geological phenomena of the area and of course relax at the famous Blue Lagoon. 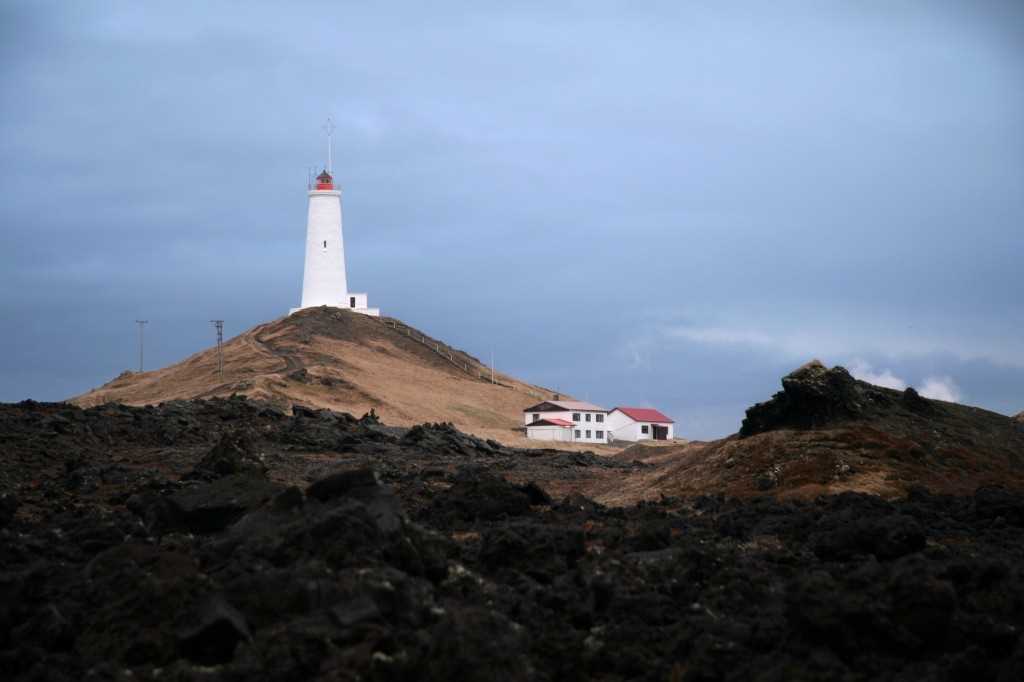 Walk on the Mid-Atlantic Ridge

„Here you can see the mid-Atlantic ridge rise above the sea surface and you can literally walk on its surface. Here we can see the unique power in the earth unified with the lands natural landscape to create a completely unique setting. The ground takes on spectacular forms in immense lava fields, caves, hot springs and volcanic craters. The interplay of the wide spectrum of colors created by the geothermal areas make Reykjanes a paradise for photographers. You can seevariable flora in between the black sands, rugged lava fields and tall cliffs facing the ocean. The birdlife of these cliffs is considerable, especially in Krýsuvíkurbjarg and Hafnarberg, “ says Kristján. Reykjanes’ unique geological phenomena stem from  the fact that it is positioned between the Eurasian Plate and the North American Plates in the North Atlantic Ocean. Reykjanes is in fact itself a part of the longest mountain range in the world; the mid-Atlantic ridge, and is one of the few peaks which rise above the ocean surface. The area is particularly active, with several volcanic eruptions in human times, due to the fact that the space between the two plates widens by around two centimeters every year. “Today there is still considerable geothermal activity close to the surface in the area, especially along the edge of the peninsula, which has created a unique and colorful landscape in its surroundings,” says Kristján. 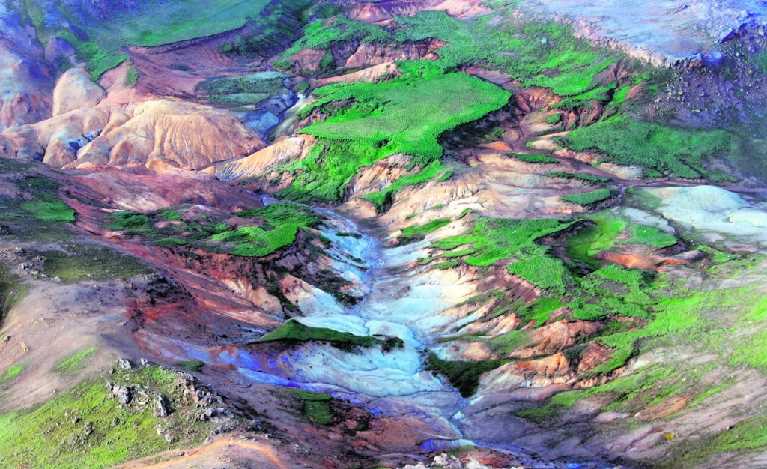 Geologically Reykjanes is the youngest part of Iceland, at least of the populated areas. The youngest lava fields came to be in an eruption around the year 1226, when the whole peninsula literally came on fire. The eruption before that dates back to 1151. The lava fields are thus of different origin and nature, and are therefore different in appearance and have various amounts of flora. In these fields there have been recorded over 200 caves of various shapes and sizes. Kristján says that those who visit Reykjanes have a wide variety of options when it comes to exploring the  peninsula‘s geology. „You can find tourist operations which offer organized trips to volcanoes, cave  exploring and guided trips around the lava fields. The tourism industry is thus closely connected to the eology of the area, “says Kristján. 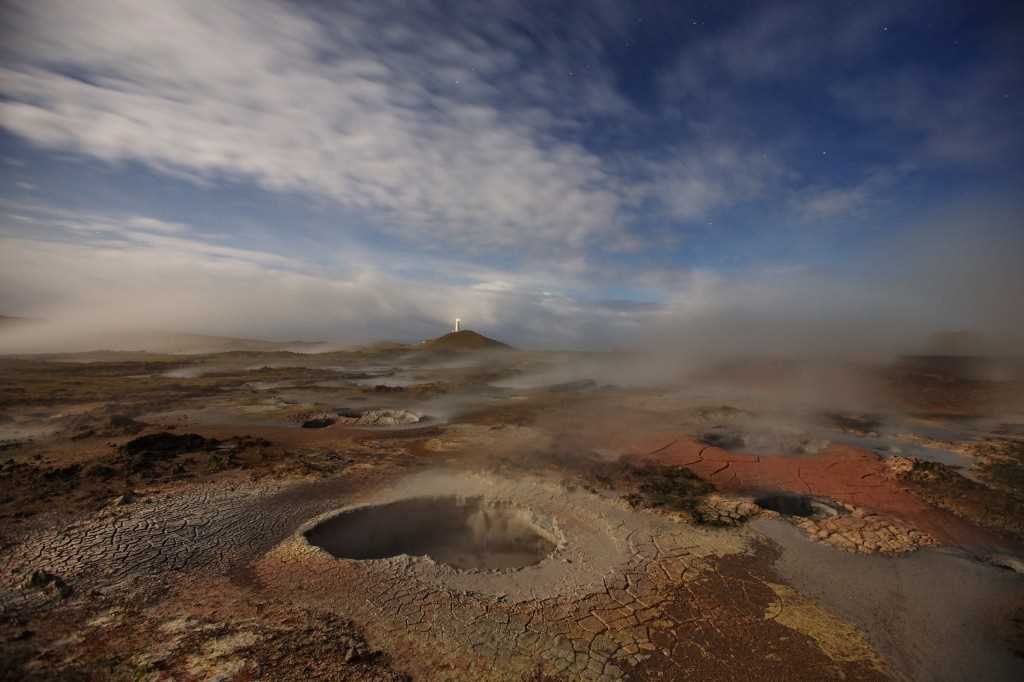 According to Kristján the most geologically prominent sites can be found on the southern edge of the peninsula, particularly Eldvörp and Krýsuvík. „This is the area in which we have based our services to our visitors. The Blue Lagoon is of course the most famous of these, in addition to Seltún in Krýsuvík and Gunnuhver. The Blue Lagoon is more than just a tourist attraction though. There is a skin affliction treatment facility on location as well as a production plant for skin treatment products. It is now the most popular tourist attraction of the country with more than 420 thousand visitors annually, “says Kristján. 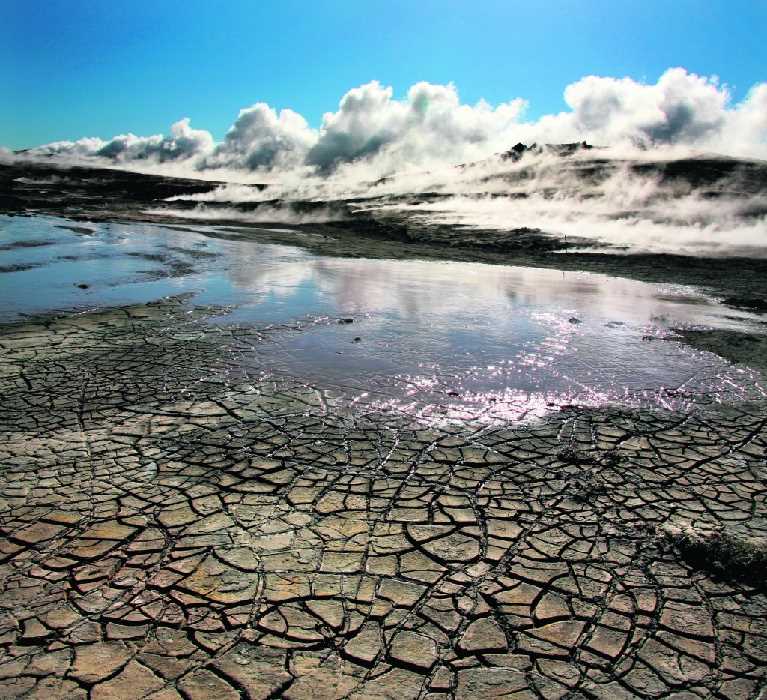 Gunnuhver is allegedly a haunted hot spring which has seen a considerable rise in geothermal energy in recent times. Legend has it that long ago a specter named Guðrún caused a great disturbance in the area, until a priest set a trap for her which  ultimately led to her falling into the hot spring. Kristján says Gunnuhver is an increasingly popular attraction, as it has additional  educational value. „Gunnuhver extremely helpful when  it comes to showing people how the earth‘s energy bursts through the earth‘s crust in the form of bubbling mud, boiling water or vapor. This frequently causes a wide array of colors to appear in the landscape, which often causes amazement and wonder for our visitor, especially those interested in photography, “says Kristján. 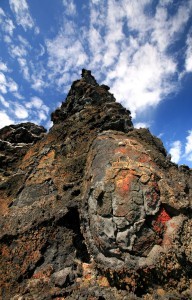 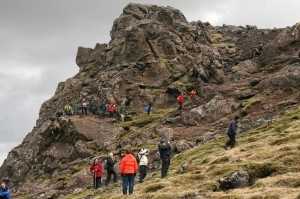 Adventure Land Kristján says that in the near future an adventure land of sorts will rise  in the area, where people can stay over an extended period of time. Activities will include: nature walks,  bird watching, nature baths andgeology research. „Gunnuhver will be the centre of the geological portion of the area, where we want to give visitors a chance to do some cooking in the hot springs, specifically boiling eggs and baking bread. Birdwatchers will get their share of activiries. Valahnjúkur is a nesting area for local birdlife and also the location for the oldest lighthouse in  Iceland. The original lighthouse was actually damaged badly by an earthquake in 1905, but a new lighthouse was erected in 1907-08 at a different location, which is now the most recognizable lighthouse in Iceland. Just off the shore is Eldey, which is an island created in a volcanic eruption in 1226, home to one of the largest population of Northern Gannets in the world. 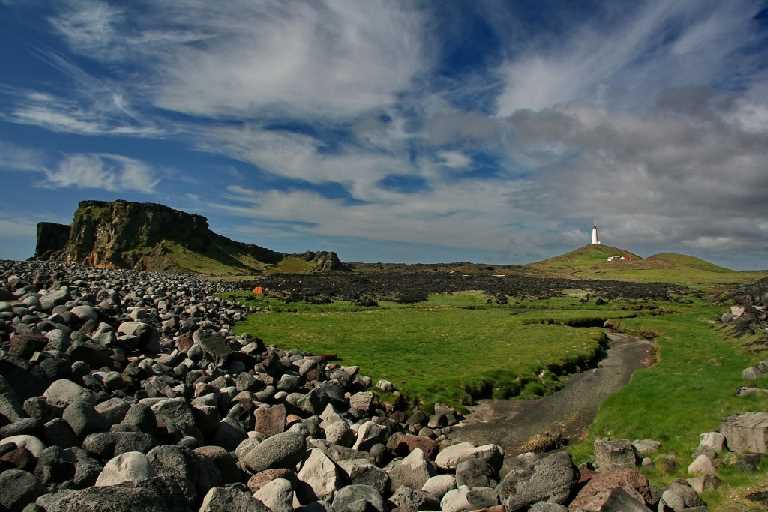 Nearby in Bæjarhóll you can find an old pool, where Grindavík‘s population learned to swim in the olden days. A 100 megawatt geothermal power station is located nearby which harnesses the power largely from Gunnuhver. Inside the plant there is a very interesting show called „Earth, the power plant, “which explains how the earth‘s energy is created and how man is able to harness it. The  harnessing of Gunnuhver‘s powerhas also formed the Grey Lagoon in a similar way that the Blue Lagoon came to be, where we hope to offer a bathing facility in the near future. This area thus has exciting opportunities in abundance, which will hopefully  be accessible to our many visitors in the near future, “says Kristján. 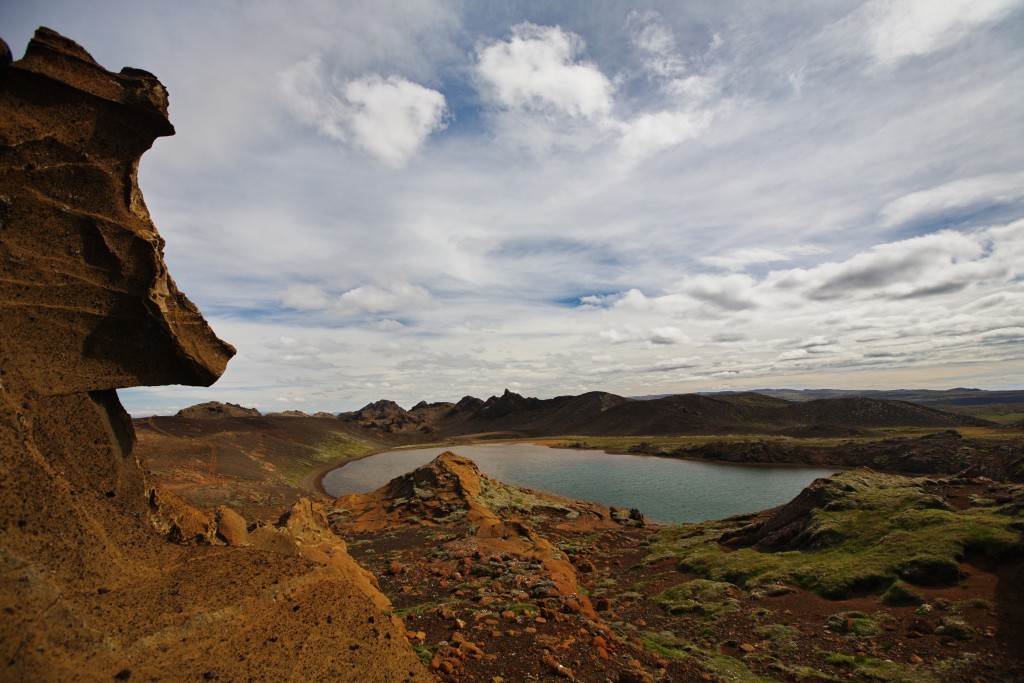 Close to the Capital

Kristján says that one of the many benefits of touring the Reykjanes peninsula is its proximity to the capital area. “70% of the population lives within an hour’s drive from most of the locations in Reykjanes. The road system here is excellent, with the only lighted highway in Iceland. As Reykjanes is a relatively small area it is easy to commute between its varied attractions. It also boasts of more accommodation than most other areas in the country creating healthy competition, which results in lower prices for the consumer,“ says Kristján. 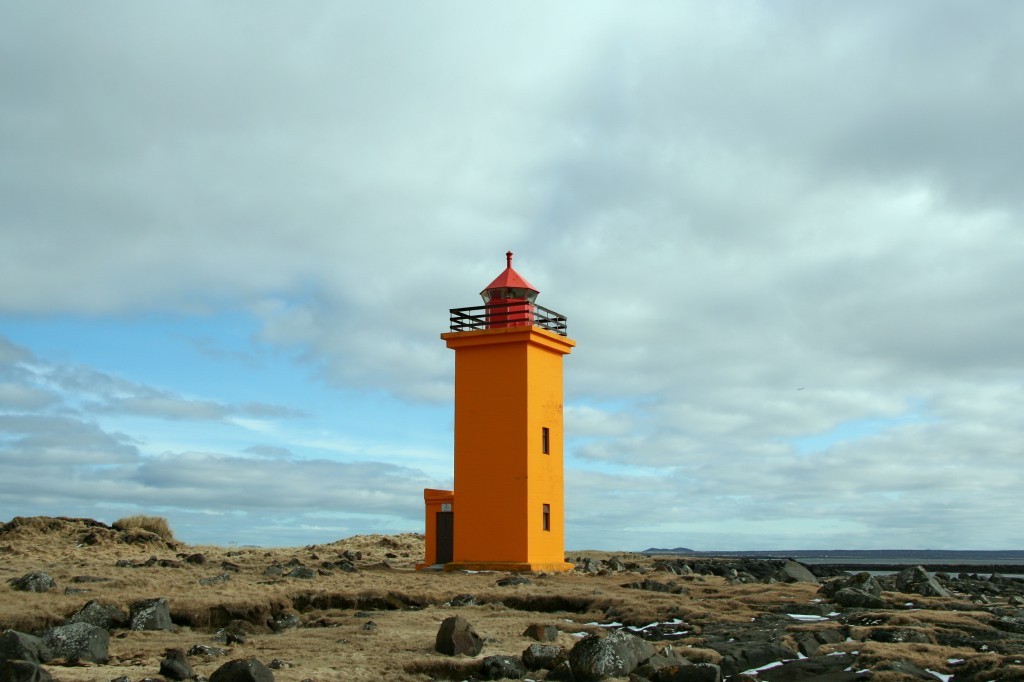 Among the activities offered in Reykjanes is a long list of museums, with exhibitions connected to the area and its history. One of those is Víkingaheimar (e. Viking Worlds) in Reykjanesbær where you can see a genuine Icelandic Viking ship called Íslendingur as well as catch the show Vikings – the North Atlantic Saga, which was a gift from the Smithsonian Museum. In Reykjanesbær you can also find Duushús, which is a cluster of historical buildings which amongst others exhibit a huge collection of model boats. The natural museum in Sandgerði, Fræðasetrið, offers an exciting exhibition on the arctic explorer Jean-Babtiste Charco, whose ship the Pourqui Pas sunk off the shore of Reykjanes in 1936. Kristján says it is also worthwhile to visit the docks in Sandgerði, where you can observe the small fishing boats bring in the catch of the day. In Grindavík you can visit the Salt Fish Museum, which tells an important part of Iceland‘s history, as salted fish was once one of Iceland’s main exports. 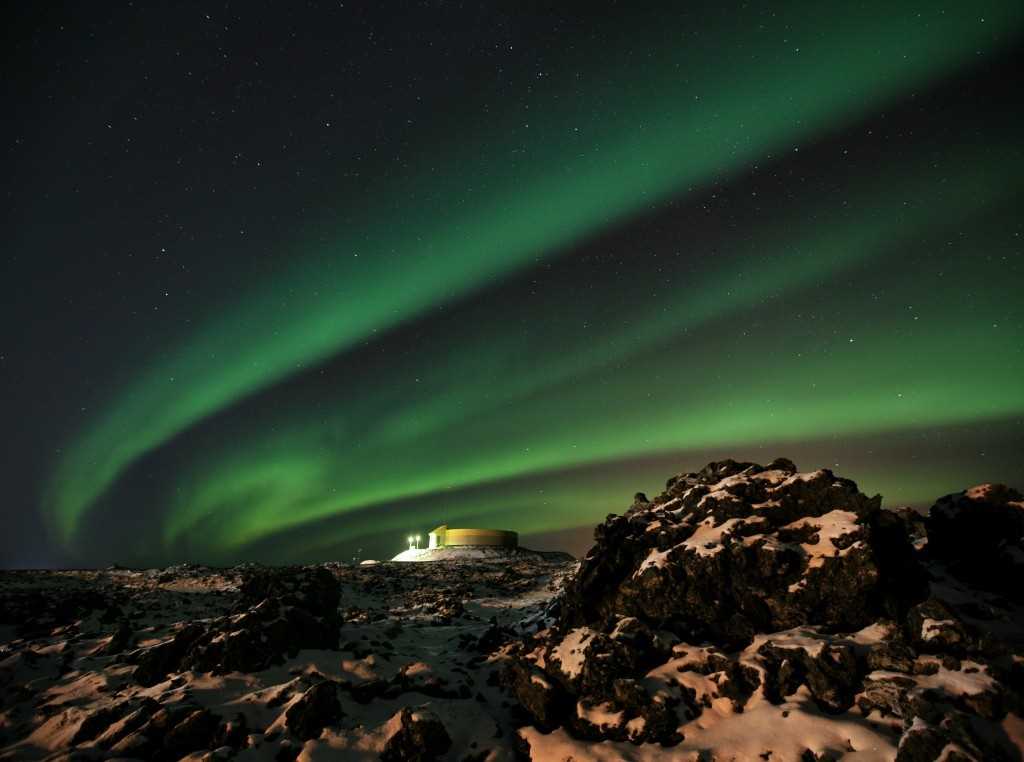 You can also book adventurous quad bike tours and volcanic tours around the peninsula. Other services worth noting are sea fishing, car rental, horseback riding and guided walking tours. Kristján says that walking paths around the area are numerous and that ancient walking paths from a time when no roads or automobiles existed. All of the major attractions in Reykjanes are handicapped accessible, including the Blue Lagoon, the Salt Fish Museum and Viking Worlds.