Skagafjörður Heritage Museum has exhibitions in four places: The old turf building at Glaumbær, Heritage House in Sauðárkrókur, Emigration Centre at Hofsós and The Icelandic Horse History Centre. Glaumbær turf farmhouse, with its many rooms, pieces of furniture and utensils is perhaps the most interesting exhibition for foreign visitors. “It is my favourite because visitors can walk into the building and explore each one of the rooms and its contents,” says Sigríður Sigurðardóttir, the chief curator of Skagafjörður Heritage Museum. 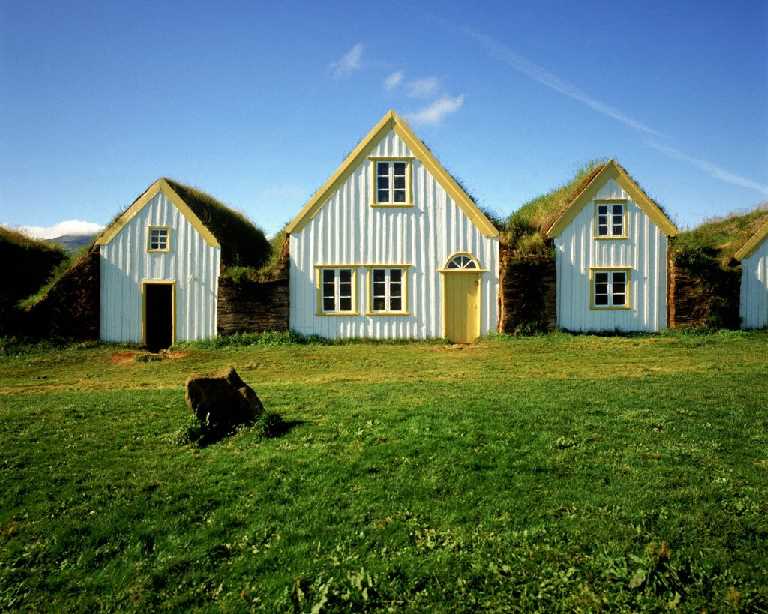 The Curator’s Favourites
The Glaumbær turf farmhouse represents the final stage in the evolution of the Icelandic turf farmhouse, an evolution that is unique to Iceland.  “The evolution of the Icelandic farmhouse was influenced by the local lack of timber and its use to heat houses, the lack of locally available building material, and shortage of capital to spend on imported materials. Iceland is the only country in the world where you’ll find a passage turf and stone house with A-framed wooden gables,” says Sigríður.

The Sum is Greater than the Parts
Research plays an important role at the Skagafjörður Heritage Museum. “We have a wide range of expertise in different fields. There’s a special department which is dedicated specifically to preservation, restoration and research. Our research is primarily archaeological, ethnological and historical in nature, which reflects the interest and education of the different specialists. The current staff includes two archaeologists, ethnologist, a geographer, and a historian with further specialisations in human osteology, philosophy and ethnography. Skagafjörður is a treasure trove when it comes to heritage studies and we strive to make our research available to laymen and specialists alike. We’ve looked at diverse topics such as the health and diet of ancient populations, settlement development, the church history, the craft of turf building and the history and development of horse-gear to name but a few things,” says Sigríður.

Four generations of watchmakers
The Heritage House in Sauðárkrókur is another one of Sigríður’s favourite exhibitions
within the museum. “The museum pays homage to blacksmiths, carpenters, saddle makers and watchmakers”. Yes, you read correctly—watchmakers. The Danish king visited Iceland in 1907. Young J. Frank Michelsen was in the king’s entourage. He returned to Sauðárkrókur in 1909 where he set up a shop selling jewellery, clocks and watches. Today, the fourth generation of Michelsen watchmakers have a shop in Reykjavík where they sell their own quality brand-name watches.

Look at the Polar Bear
A stuffed 2 metre tall polar bear in a glass cage greets visitors at the Heritage House in Sauðárkrókur. “Visitors love looking at it, especially the children,” says Sigríður. The 20 year-old male polar bear on display swam to Iceland from Greenland in June 2008. Sadly, it had to be put down after it made a gesture to attack photographers and the general public who out of curiosity ventured too close.

“The interest in the animal was quite understandable because polar bears are a rare sight in Iceland.”  -SHV