The Skíðastaðir Girl and the Raven 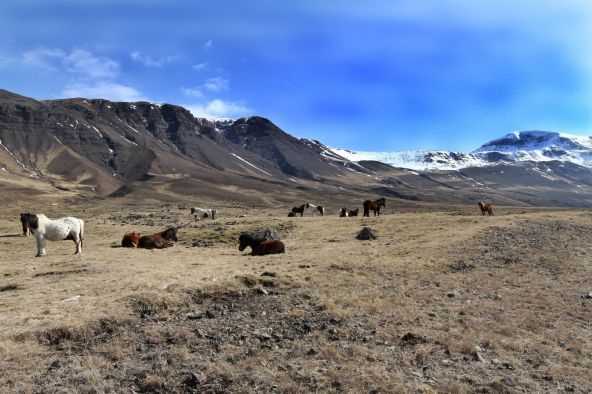 The Skíðastaðir Girl and the Raven

The Ring Road leads eastwards through Húnavatnssýsla district, via Hrútafjörður and Miðfjörður, Línakradalur and Víðidalur. At the mouth of the Vatnsdalur valley is a vast collection of hillocks, the famous Vatnsdalshólar (Vatnsdalur Hillocks), which are said to be innumerable, like the islands of Breiðafjörður or the lakes of Arnarvatnsheiði. The origins of the hillocks are not clear, but the commonly held view is that they were formed by a huge slide of rock from Mt. Vatnsdalsfjall in prehistoric times.

South of the hillocks is a large lake, Flóðið, which formed in 1720 when a landslide struck the farm of Bjarnastaðir, killing six people. The landslide dammed the river, forming a new lake. Through the valley flows the Vatnsdalsá, one of Iceland’s most picturesque and teeming salmon rivers, formed by the confluence of many smaller rivers that flow off the highlands to fall in a series of waterfalls through a large gully in the inner reaches of the valley.
Vatnsdalur was first settled by Ingimundur Þorsteinsson the Aged, who made his home at Hof. He was attracted by the beauty of the valley, and by its excellent resources of woods and grasslands. On the way to this new home, Ingimundur’s wife bore him a daughter, Þórdís, who is said to have been the first native of the Húnavatnssýsla area. She was bom at Vatnsdalshólar, where a monument has now been raised to her, along with a wood named Þórdísarlundur (Þórdís s Grove) in her honour. To the west of the wood is Flóðvangur, a community centre providing accommodation for anglers in the Vatnsdalsá river. Many landslides have fallen from the slopes of Mt. Vatnsdalsfjall to the east of the valley, leaving traces on the slopes and lowlands beneath. In addition to the Bjarnastaðir landslide mentioned above, an even larger landslide fell in 1545, laying waste to the farm of Skíðastaðir. Thirteen people died, but tradition says that one girl survived in an extraordinary manner:
Long ago at Skíðastaðir there lived a very wealthy farmer. He had many labourers on his farm and kept them hard at work both winter and summer. During the haymaking season he had the women servants cook meals only on Sundays, so that they could help with the haymaking on other days, and he would permit his workers neither to attend church nor to read the Good Book at home. Early one Sunday morning, a man dressed in white, and carrying a staff in his hand, was seen from many farms in the area as he walked northwards over Vatnsdalsfjall. He halted above Skíðastaðir and struck the mountain with his staff. Immediately a landslide began there, which grew larger and larger as it slipped down the slope. This awesome rockslide struck the farmhouse of Skíðastaðir, so that no living person survived except for one girl, who was at that moment away from the farmhouse.
This girl had been at Skíðastaðir for a long time, although she was not happy there and was dissatisfied with the farmer’s godlessness. But she was kind and willing, and for this she was popular both with her masters and with the other workers. She often had to cook on holy days and received no extra reward, except that she was allowed to scrape the pot. The winter before the landslide fell was very harsh, so that both people and beasts died of starvation. The farmer of Skíðastaðir had plenty of everything but he refused to share it with others, though he was asked to do so, and he cruelly turned away all those who came in search of help. The girl, who cooked on Sundays, was sad not to be able to help the poor and hungry people, and she tried to give them some of her own food and the scrapings of the pots. The harsh winter was also difficult for all animals that had to be outside, so that they lay dead in piles. And crowds of ravens collected at farms to peck at any refuse that might be thrown out. The girl threw out as much as she could from the kitchen, for she was kind of heart and wanted to help the ravens, like the others. One of the ravens grew so fond of her that he followed her every step out of doors. In the spring and summer following that harsh winter, he arrived early every morning at Skíðastaðir, for the girl always kept some food for him.
On the Sunday morning of the landslide, the girl had risen very early to cook porridge. She hurried to finish scraping out the pot before the raven arrived, so that she could give him the scrapings. Just as she was finishing, she heard the raven croak outside. She took the scrapings outside in a ladle and placed them on the stones where she normally fed the bird. But the raven would not touch his food. He fluttered around and then flew a little distance out into the field. The girl followed with her ladle, but he did not want to eat there and flew farther off. So it continued: the girl followed the raven, trying to feed him, but he always flew up and went farther and farther away. The girl did not understand why the raven was behaving so strangely but she was determined to feed him. She followed him until he had led her some distance south of the homefield. The girl started to think that this was enough, that she must run back to the farmhouse. But at that moment she heard a roaring in the mountain, which preceded the landslide and the flood of water that accompanied it, and she saw this mass sweep over the farmhouse and right across the valley. And she thanked God with all her heart for sending the wise raven to save her.