Situated only five minutes away from Keflavik International Airport is Iceland’s only Rock & Roll museum. It’s in Keflavik which has been dubbed the Beatle-town of Iceland because the nation’s biggest Beatle-esque band, Hljómar started it’s journey there. Owing to the town’s proximity to the former USA Army base, which is next to the airport, the townspeople were amongst the first to be introduced to Rock ’n Roll music in Iceland. It is thus very fitting Keflavik hosts the museum. It is in a newly built house called Hljómahöllin, which is both a nod towards the band and a play on words, since hljómar means both sound and chords.

The museum is for anyone who is interested in Icelandic music, since it covers it’s history from 1830 to today. It isn’t like traditional museums where you have to buy a brochure to get further information about the pieces, because when you arrive, the museum lends you an iPad which has the Rock ’n’ Roll app installed. It allows you to dive deeper into the history of each artist, as well as listen to their music and watch videos.

The museum has a lot to offer. For example, you can see the airplane-suit worn by drummer Sigtryggur Baldursson from the music video for Sugarcube’s Regina; an electric guitar that formerly belonged to Brynjar Leifsson from Of Monsters and Men which he used on the band’s first tour and the LED-light outfit of Páll Óskar. The museum’s manager, Tómas Young, says you can try your hand at an electric drum kit, guitar, bass guitar and a keyboard. “There’s a sound lab where you can try out different instruments,” says Tómas. “It is a lot of fun; there’s something for everyone. It’s enjoyed equally by adults and young children. Just recently we also added a sound mixer where people can have fun with the multi track recordings of Of Monsters and Men’s hit, ‘Little Talks’. For example, if you want the guitars to be louder you simply raise the volume on the guitar track. Then we also have our own cosy little cinema, which runs documentaries all day on Icelandic music like Heima by Sigur Rós and Rokk í Reykjavík.” 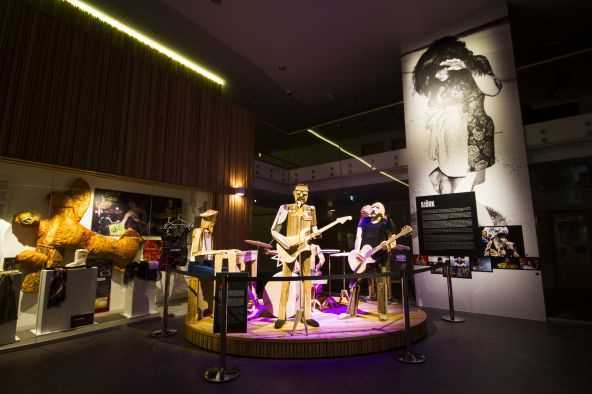 Every good museum has a shop where you can buy memorabilia and the Icelandic Rock ’n’ Roll museum is no different. You can buy the newest releases of current musicians as well as older releases. For those who want deeper knowledge of Icelandic music and artists, the shop sells various different books and documentaries on the subject. There’s also a coffee house run by one of Iceland’s better coffee-makers, Kaffitár. It’s a local roasterie and specialises in importing, roasting and serving the finest coffee beans from Arabica.