It’s getting darker outside. At the beginning of August, the darkness swoops in, as can be seen in the photo. Taken at half-past ten, east of Hringbraut, the twilight is well on its way to complete darkness. Hringbraut is the main road to and from the western part of the capital.

On the far left of the picture, you can see six construction cranes. This is the largest construction project in Icelandic history; the new Landspítali University Hospital is being built.

In the middle of the picture, at the top of Öskjuhlíð, a small hill in the city, you can see the illuminated Perlan (the Pearl) resting on six hot water tanks. There is a museum in Perlan as well as restaurants, and of course a good view of the capital area. The Pearl was opened 30 years ago, in 1991.

To the left of the picture, you can see the landing lights at Reykjavík Airport. The British built the airport during World War II and it has been the centre of domestic flights in Iceland since 1945. The airport’s location has been a matter of much controversy in recent years, as many do not think it is appropriate for the city’s best building land to be used as an airport. 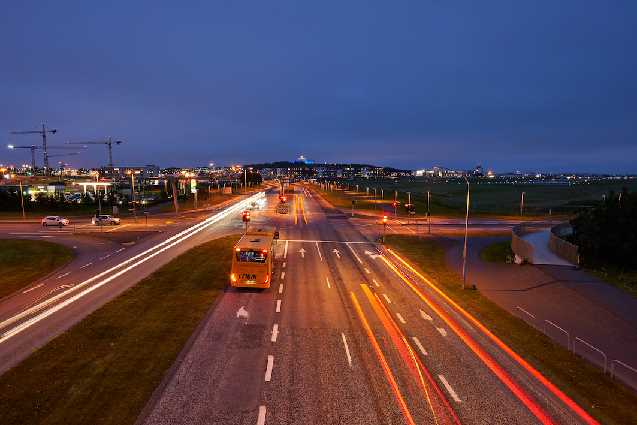 This bus was on its way from Skerjafjörður to Hlemmur and from there, on to the eastern part of the city.