It’s a Bird’s Life in the Lake Mývatn area 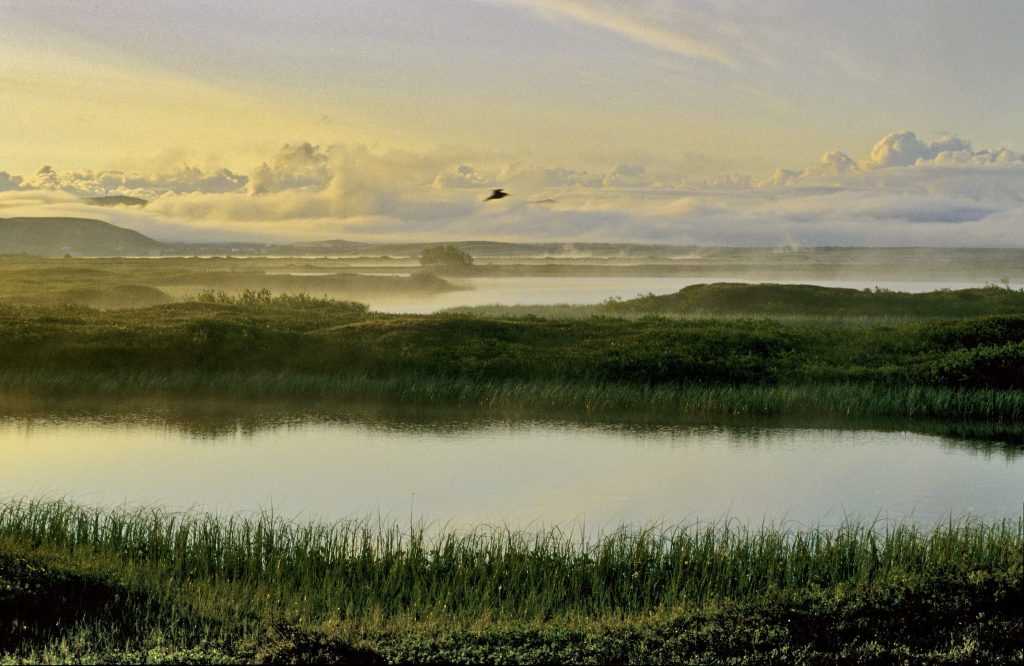 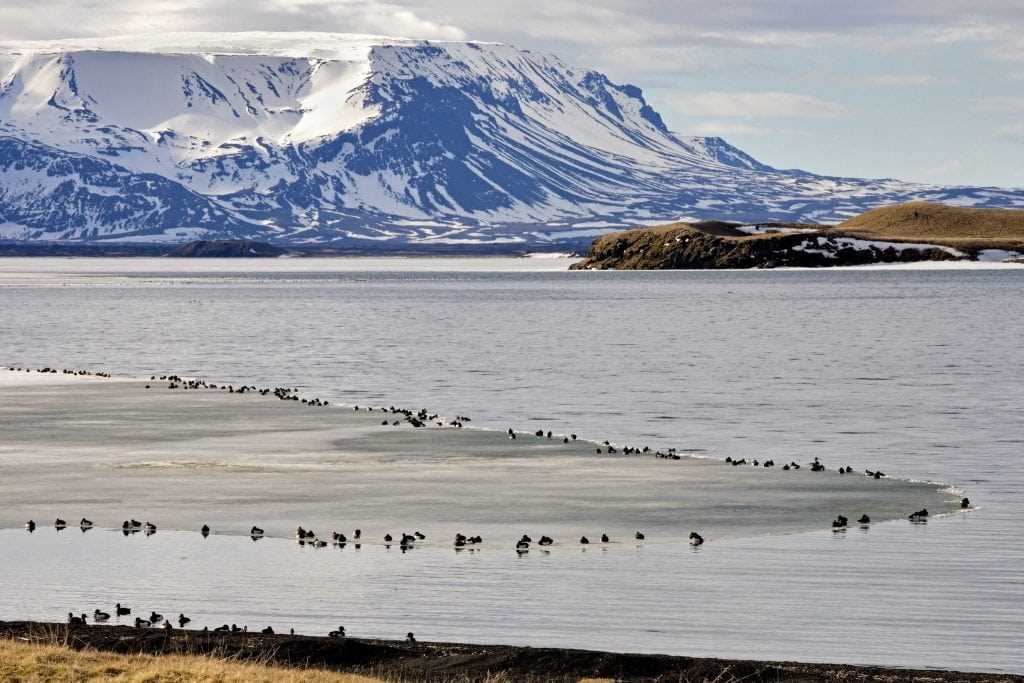 Mývatn is known to birders throughout the world for its rich bird life, particularly its abundance of breeding wildfowl. No other site in Europe can boast such a diverse range of breeding ducks as the Mývatn area. Fourteen of the sixteen species of duck which breed in Iceland can be found here; the Common Eider and Common Shelduck are coastal species and are therefore rarely seen at Mývatn. Three other species of wildfowl, Whooper Swan, Greylag Goose and Pink-footed Goose, also breed in the area. Two species of divers and one grebe breed: Great Northern Diver, Red-throated Diver and Horned Grebe. Their habits resemble those of ducks in many ways, at least during the summer. 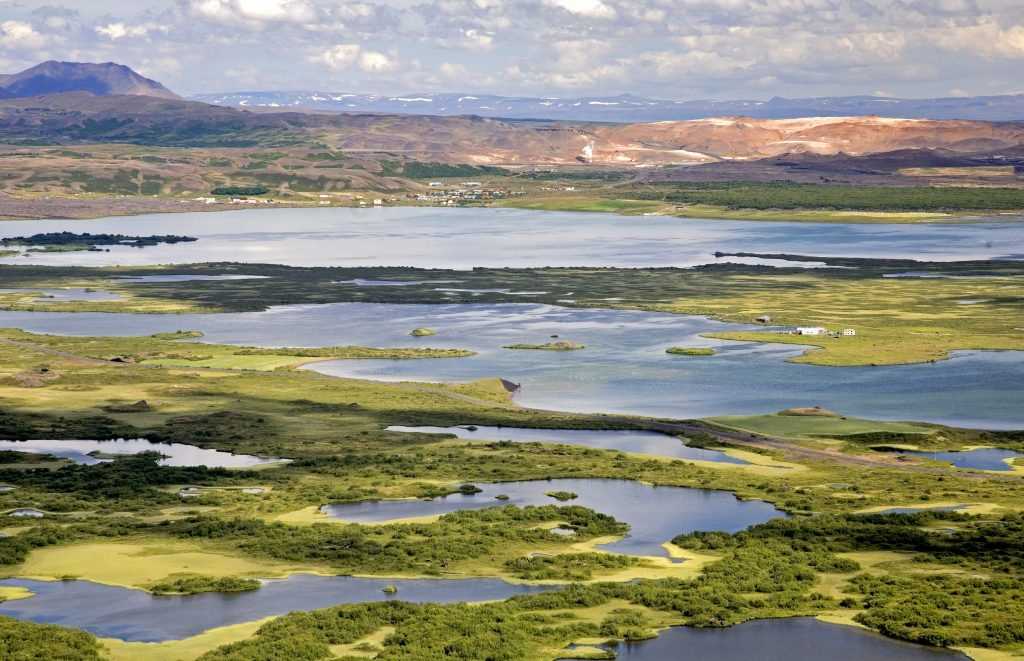 The Mývatn area offers you a wide range of excellent bird watching sites. Bird life and bird habitats are extremely diverse, typified in this region by highland oases, lakes of global importance for birds, rich b

irch woods and scrubland. Wetlands and small lakes are frequently encountered and moorlands are found widely. 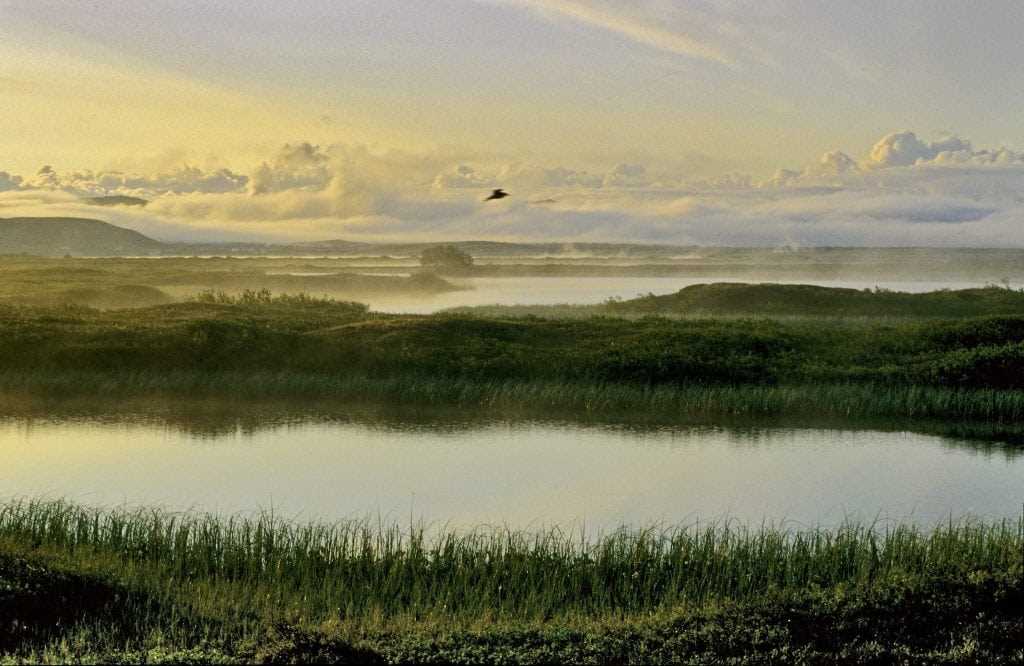 In April, as spring arrives and the ice on the lake melts, migratory birds flock to Iceland. Fields, ponds, lakes and rivers are swamped with birds arriving from Europe and Africa. The first breeders, like Raven and Gyr Falcon, have already laid their eggs and at the end of April the Horned Grebe starts its magnificent courtship display. In May, the elaborate display of numerous species of ducks reaches its climax. May and June are the best months for birdwatching. Nature is recovering from the long, hard winter and the birds are extremely active and conspicuous. The countryside is filled with the sound of bird song, courtship and lively displays, the sun barely dips below the horizon and the symphony of nature seems endless. Drakes are particularly impressive at this time of year, with Long-tailed Duck and Barrow’s Goldeneye fighting vigorously for mates and territory. Harlequin Ducks hurtle along the River Laxá and the Great Northern Diver can be heard wailing out on the lake. 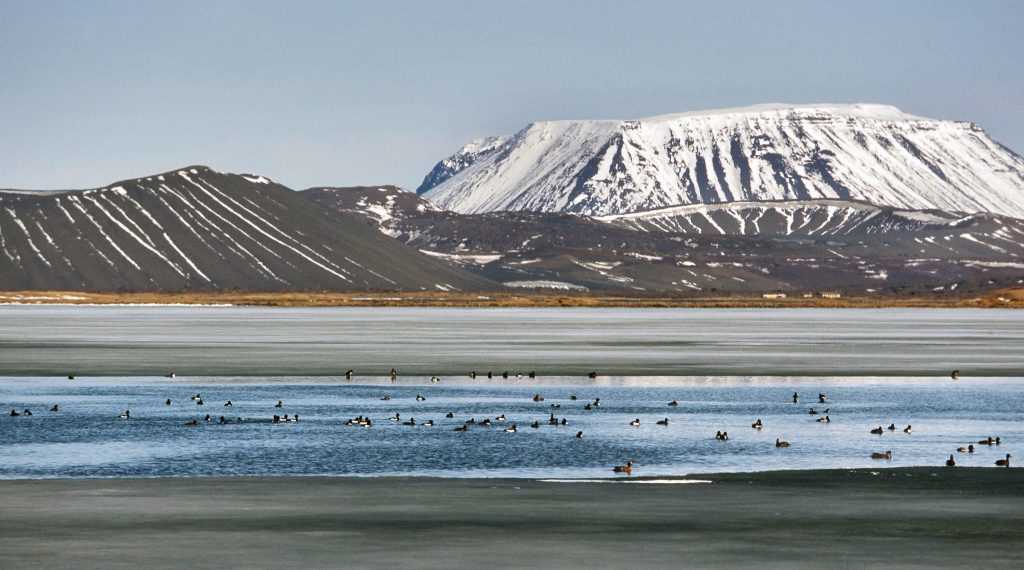 In July, everything seems to calm down and the adult birds get on with quietly feeding and raising their young. The drakes moult and group. Drake Harlequin Ducks and Common Scoters head for the sea.

In August, the birds gather for migration and those that travel the longest distances, like the Whimbrel and the Arctic Tern, leave for their wintering grounds. Mývatn is by now swarming with ducks if the breeding season has been successful.
September is the main migration month in north-east Iceland but geese and some ducks and passerines do not leave until October.  However, numerous birds remain in the area during the winter.  At Mývatn and River Laxá some areas remain open all winter and attract resident Whooper Swans, Barrow´s Goldeneyes, Goosanders and Mallards. Even a few Harlequins can sometimes be found on the river in winter. 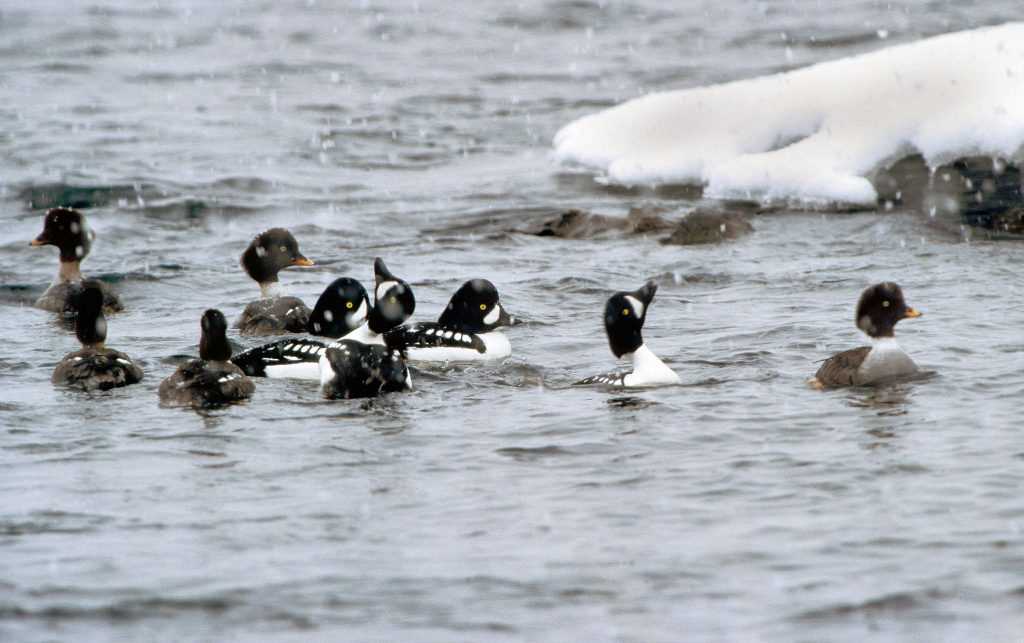 Waders often nest in or close to rich, vegetated marshland, which is a common habitat in the Mývatn area. They take advantage of the abundance of midges and can often be seen on the shores of the lake, picking up insects which have drifted ashore. One of the most characteristic birds of the Mývatn area is the Red-necked Phalarope.  Eight species of waders breed in the area, including Black-tailed Godwit, and several more species are seen regularly. Black-headed Gull is the most common gull in the Mývatn area and the only species which breeds in any number. Lesser Black-backed Gulls and Great Black-backed Gulls are summer visitors to the lake. The Arctic Tern is a common breeder but it does not breed in large colonies at Mývatn. Arctic Skuas breed on the surrounding moorlands. The varied habitats around Mývatn attract a range of passerines and the abundance of insects provides rich pickings for them and other birds in the area. Birch scrubland and woodlands are home to Iceland’s typical forest birds, like

the Redwing, Common    Redpoll and Eurasian Wren, for example. Snow Bunting and Northern Wheatear nest in lava fields, stone walls and craters. Other land birds are the resident Gyr Falcon and Rock Ptarmigan, and the migrant Merlin and Short-eared Owl. 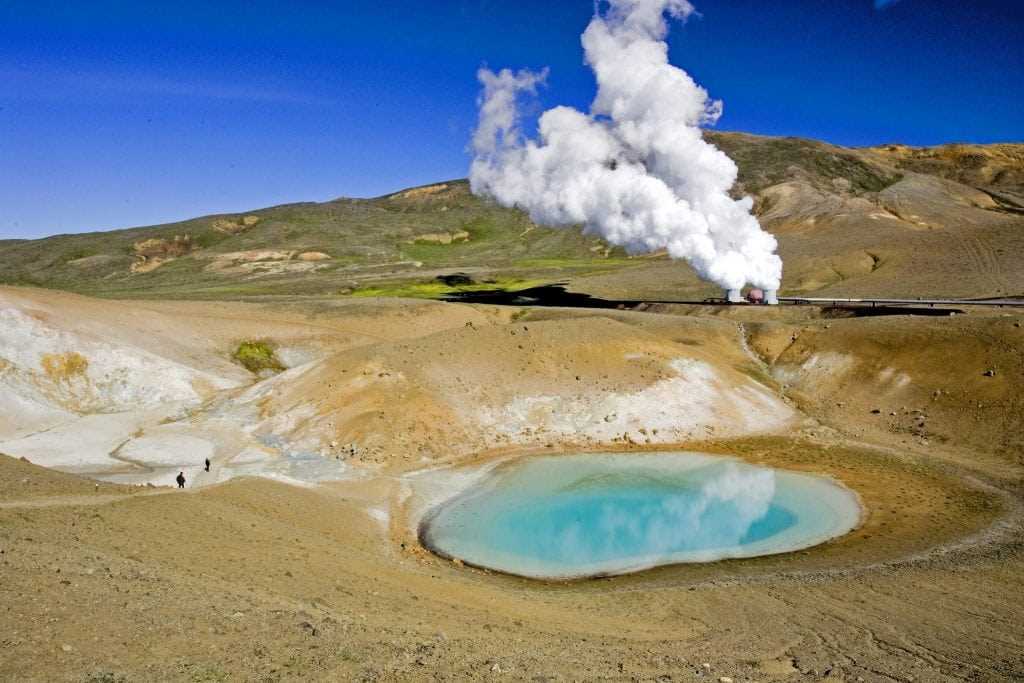 The midges at Mývatn (which means Midge Lake in Icelandic) and the River Laxá are the mainstay of the local birds’ existence. If the midges were absent, there would be far fewer birds. The larvae of non-biting chironomid midges live in the lake itself; they develop in the mud on the lake bed and live on diatoms and decaying organic matter. Black fly larvae, on the other hand, attach themselves to rocks in the River Laxá and feed on passing debris. Only the black fly bites; chironomids simply irritate people, livestock and birds by flying into their noses, eyes and ears. 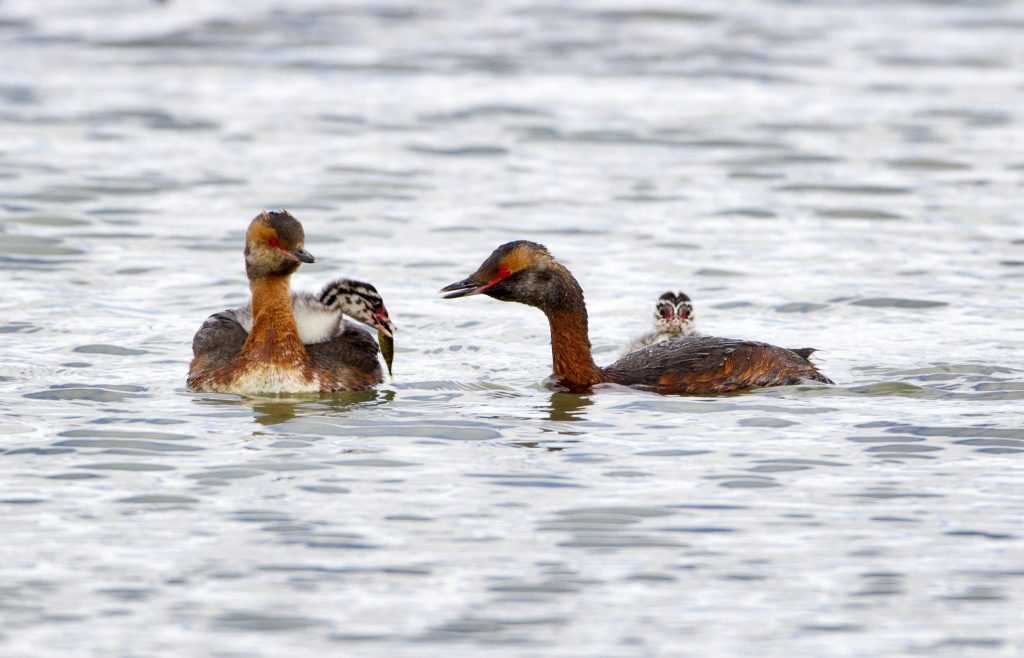