As you wind your way through the fjords of Eastern Iceland, you will come to the small traditional fishing village of Djupivogur, population 454.

While small in size, the area is brimming with a diversity of natural attractions that are not to be missed. In recent years, the Djupivogur municipality has begun a project which aims to introduce and educate the public about the enormous number of bird species which migrate there every year, some of which also call Djupivogur home on an ongoing basis. 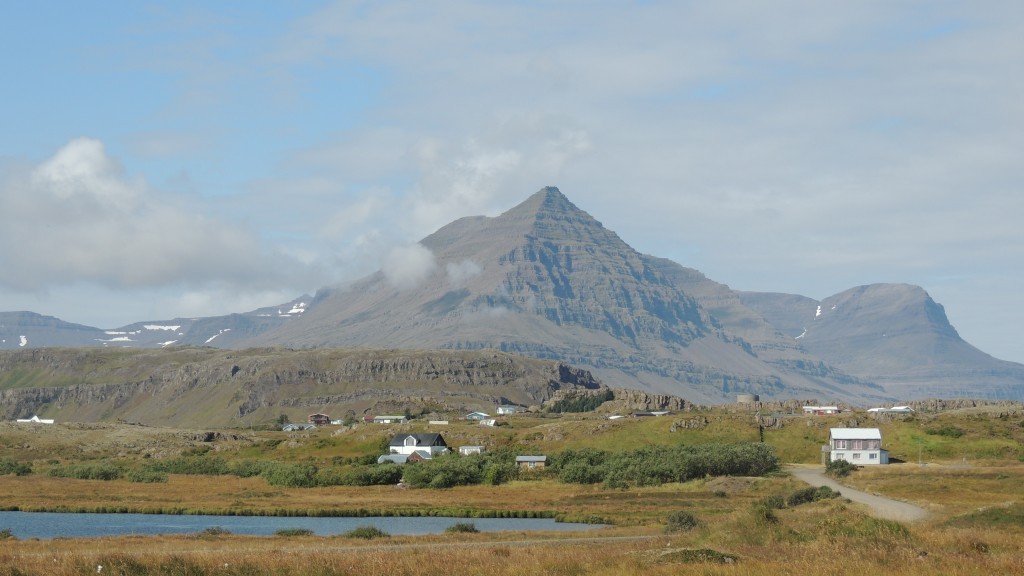 Papey Island…the perfect puffin photo op.
Originally thought to have been the home of Irish Monks before the Viking Settlement, the island of Papey retains the oldest and smallest wooden church in Iceland, believed to have been built in 1807. While uninhabited for the last 20 years, guided sightseeing tours of the island are possible with the ferryboat ‘Gísli Papey’ which also offers specialised bird- and seal-watching tours. Seals are often seen sunning themselves on the skerries and whales are not unknown in these waters either. With approximately 30,000 pairs of puffins nesting on the cliffs of Papey and surrounding islands, visitors are practically guaranteed an opportunity to catch sight of these popular sea birds, as well as eider ducks, guillemots and kittywakes. 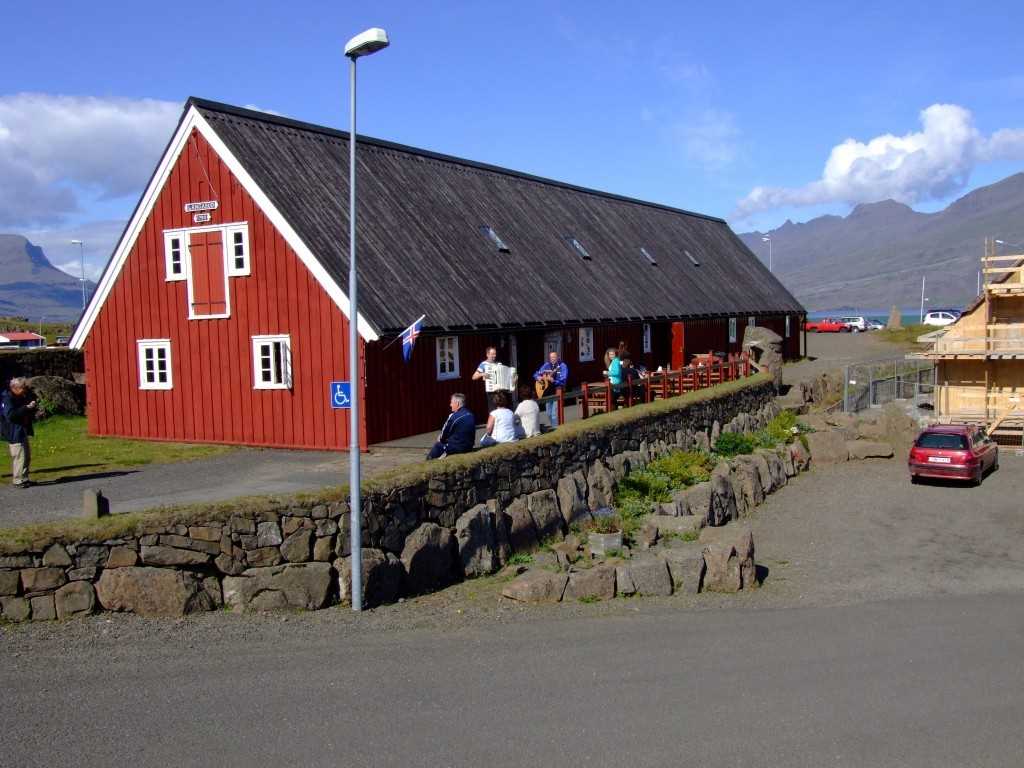 Langabúð
The oldest house in Djupivogur, ‘Langabúð’ was built in 1790 and is one of the oldest houses in east Iceland. Now renovated, it serves as a cultural centre for Djúpivogur, partly by housing a heritage museum, an exhibition by the sculptor Ríkarður Jónsson and a small salon in memory of Eysteinn Jonsson, a former minister in Iceland. At Langabúð, there is also a cozy coffeehouse offering homemade cakes and other Icelandic specialities. 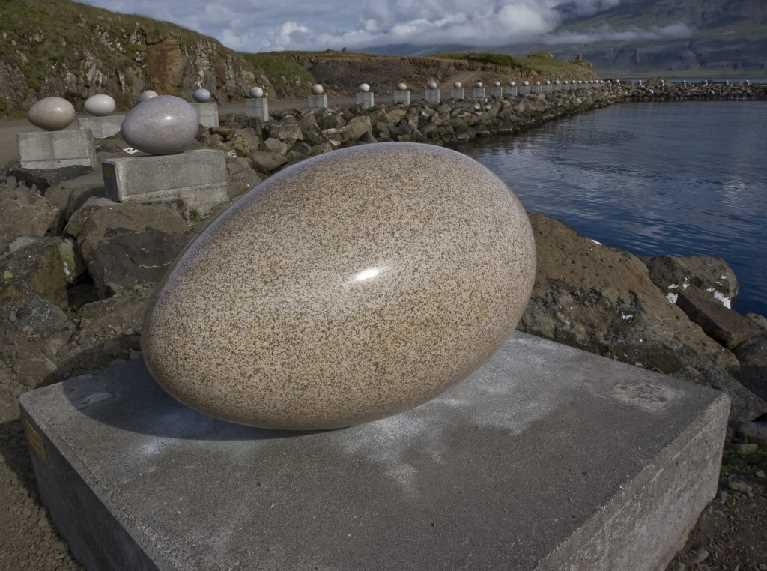 The Eggs of Merry Bay
Just 900 metres from the Djupivogur village centre at Gleðivík, (Merry Bay) lies undoubtedly one of the most unusual sculptures in Iceland. Created in 2009 by Icelandic artist Sigurður Guðmundsson, it consists of 34 large scale replicas representing 34 bird species found in the area. Each one, different from the others, with shades of colour, shape and nuance, is beautifully executed. 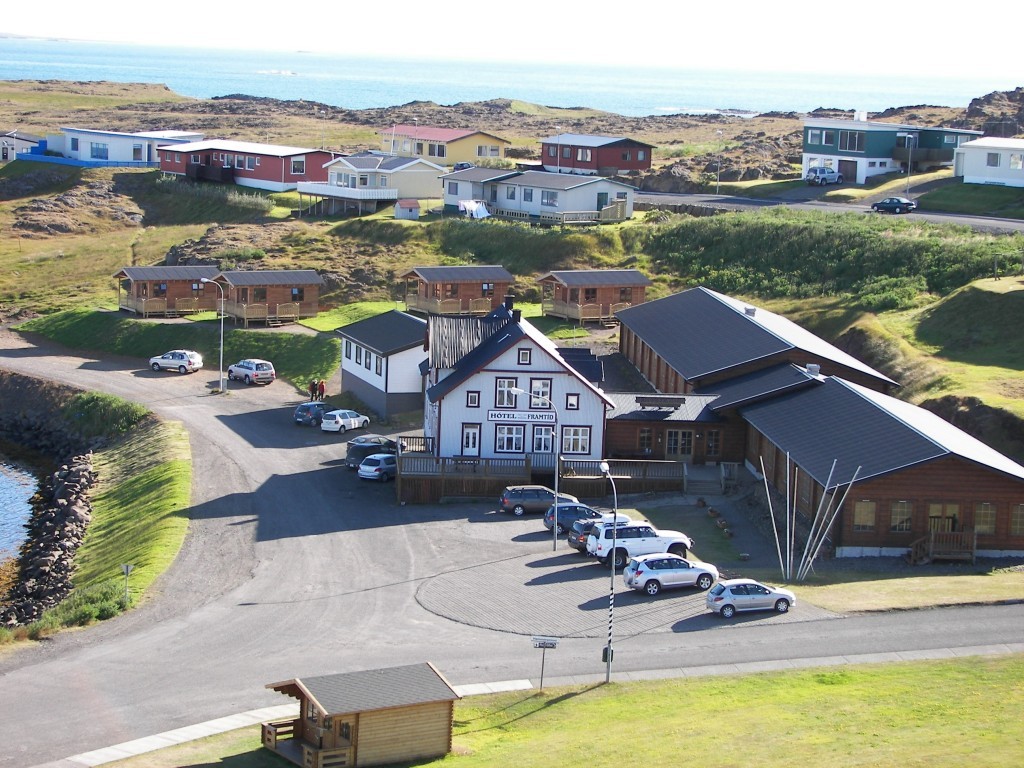 This friendly hotel with its charming atmosphere and marvellous views over the harbour offers comfortable accommodation. The hotel’s restaurant in the main building is full of charm and character and can accommodate 40 guests but the hotel also has a new restaurant with seating for 200 persons – ideal for groups and special events. There is also a bar and your stay is not complete until you have tasted the freshly-caught fish and other seafood dishes on the menu. Hótel Framtíð also runs the camp site in Djupivogur.