It was only a few years ago that Iceland was called ‘Europe’s Best Kept Secret’. It wasn’t a place to bake in the hot sun. It was at the north pole, wasn’t it? Covered in ice? Today, many people are discovering just what treasures were being kept secret. 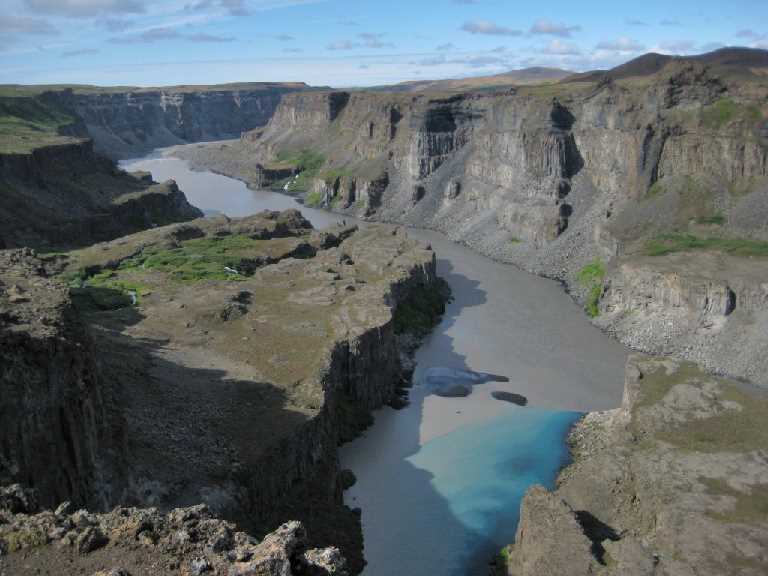 Yes, there is ice and, along with the fire of the volcanos, it has shaped a land of unique beauty and challenges, a land for those not satisfied with just regular adventure and who will be filled with memories others can barely dream of. There are many jewels in this park in Iceland’s north, each so different from the others that, together, them provide days of new experiences and wonders.
It is thought that a massive glacial flood, caused by a volcanic eruption under the Vatnajökull glacier thousands of years ago, sent a torrent of water north, carving the Jökulárglúfur (Glacial river canyon) that forms the centrepiece of the National Park, which is 150 km2 in size and was founded in 1973. The canyons are, in several locations, from 100 – 120 metres in depth and average 500 metres wide. They extend for about 25 km. in length. The Jökulsá á Fjöllum (Glacial river in the mountains), the river that continues to flow through the canyon, has the largest catchment area for any river in Iceland at 7380 km2, with 1700 km2 under ice. It is the most powerful river in Iceland and carries such a volume and flow of water that, when it reaches Dettifoss, it creates the most powerful waterfall in Europe.
Stretching about 200 km., the river’s source is under the massive Vatnajökull glacier – Europe’s largest ice cap (in volume). It flows north through the wilderness area of central Iceland before finally flowing into the Arctic Sea at Öxarfjörður. It carries 5 million tonnes of sand and sediment to the sea annually. However, its route is not all barren. On the contrary, it is a route filled with contrasts. For instance, the three nature reserves of Hólmatungu, Hjólaklettur and Ásbyrgi are rich in diverse vegetation.

Hólmatungur highlights the contrasts along the river’s path. Here, an expanse of rich vegetation meets the eye of the hiker who will experience one of the most beautiful hiking trails in Iceland. Bubbling up from the ground, countless streams of water then flow down towards the river, tumbling over ledges into Jökla. Beautiful columnar rock formations and the special Gloppuhellir cave in Gloppa augment the beauty of the nature to be found here. Ásbyrgi, (The shelter of the gods) is one of the most magical places in Iceland and one of nature’s wonders that would not be out of place in ‘The Lord of the Rings’. It is a horseshoe-shaped canyon with sheer cliffs up to 100 m high. It is 3.5 km long and over 1 km wide. In its centre, a massive rock formation, known as Eyan (the Island) rises dramatically from the flat base of the canyon. Legend has it that Sleipnir, the eight-legged horse of Óðinn, the chief god of Norse mythology, touched one of its feet on the ground here, leaving the horseshoe print that makes Ásbyrgi, also known as Sleipnir’s footprint, unique. Today’s scientists offer more prosaic theories of two catastrophic floods, one 8 to 10,000 years ago and a later one, 3,000 years ago carving out the canyon. Both are certainly colourful explanations that match the view visitors see. The floor of the canyon is covered in rich woodland, vegetation and flowers, a beautiful oasis in a volcanic wilderness. A number of foreign species of trees were introduced between 1947 and 1977, including fir, larch and pine, adding to the natural richness. A variety of waterfowl species find their home in the small lake Botnstjörn, a very tranquil site that can be reached by car and a short walk, with outstanding views around it. Ásbyrgi is also believed to be the capital city of the elves (álvar) or ‘hidden people’ (huldufólk). Psychic people have seen many homes, public buildings and concert halls belonging to them, adding to the many stories that abound about encounters with these special beings in Ásbyrgi and around the Botnstjörn pond or lake. Various rock formations in the cliff face on the walk from the car park look like faces.
Perhaps this is why the camping site there is so popular! The location is perfect and there is a nearby swimming pool. Children can’t get lost here. They love it! It has space for 350 tents and there is a section for campers and tent-trailers, with access to electricity. Facilities include toilets, showers, a washing machine and drying closet. Whilst there are no designated cooking facilities, dish washing can be done in sinks next to the service buildings. The campsite is open from 15th May to 30th September. From the excellent Visitor’s Centre, hikers can get detailed information about Ásbyrgi, the park, wildlife, vegetation, landscape and maps showing the hiking trails. It is open during the summer only from June to September. The centre also has a computer available to the public and wireless Internet access.
There is also a shop and restaurant by the road with a good selection of foods. During these summer months, there are scheduled bus trips run by SBA-Norðurleið to Ásbyrgi from Akureyri at 8:15 Mon-Fri & 8:30 Sat-Sun that also stop at Hljóðaklettar and Dettifoss.
Hljóðaklettar (The Echoing Rocks) are about a day’s hike from Ásbyrgi through lush vegetation in the Vesturdalur valley. They are a basalt formation of rocks which are unique in their pattern and caves that create strange echoes. It’s a great labyrinth of vegetation and large rocks where it’s not difficult to get lost, as there a many different paths – so it’s wise to keep children close here. Dettifoss
Europe’s most powerful waterfall earns its title! In Spring, the already big waterfall triples in size, with a phenomenal 193 m3/sec of water drawn from the river’s massive catchment area plunging 45 m into the canyon below. Numbers like this, however, fail to do justice to the magnificence of this natural wonder as the thunderous power of the water sends vibrations into the surrounding rocks whilst rainbows play in the spray mist in the sunshine. Located at the southernmost part of the park, it is advisable to check in at the nearest Information Centre to find out about the road conditions. (Any trip into the Interior Highlands should only be undertaken after such a check has been made. Conditions can change rapidly!) Dettifoss is the largest waterfall but by no means the only one on the river, which makes this area all the more spectacular. Just 1 km futher south is the Selfoss waterfall at 10 m high, which derives its name from an abandoned farm, Holssel. It is a special, beautiful waterfall that is really worth the extra time to visit. The third waterfall, Hafragilsfoss, is found about 2 km north of Dettifoss, and is well worth the detour across an interesting crater to reach it. At 27 m high it, too, provides a spectacular sight.

In 2008, the new Vatnajökull National Park was formed by the amalgamation of Skaftafell, Jökulsárglúfur and Vatnajókull National Parks. It is the largest in Europe, covering over 13% of Iceland.