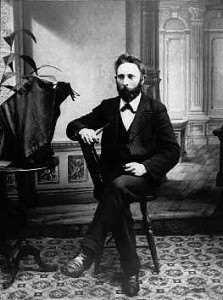 Magnús Ólafsson (1862-1937) was the Reykjavík photographer par excellence, and his pictures make an important contribution to how Icelanders perceive their city. Ólafsson´s photos span the first three decades of the 20th century. These are photographs that shift between documentary and fairytale, and provide a unique insight into a vanished world: people leave Reykjavík Cathedral in their Sunday best, men jump from ice-floe to ice-floe on Reykjavík Harbour, children run down Laugavegur, the fire brigade holds an exercise on Austurvöllur, women spread saltfish to dry on Vesturgata, a football spins on Melavöllur in 1915 – and then Magnús rises up above the community to take the first aerial photograph of Reykjavík.

Magnús was a man of many talents: an impassioned photographer – a professional in the field after the age of forty – he also played the organ and the violin – playing in a quartet that held the first ever violin recital in Reykjavík – held film shows, and is believed to have made the first ciné film in Iceland. Magnús was a man of action and conviction, a pioneer who realised that he was living through a period of upheaval, and succeeded in preserving a part of that time for posterity.