Borgarfjörður Eystri is a fjord in east Iceland. It is part of the municipality of Borgarfjarðarhreppur and, as of 2017, the area has a population of  116 inhabitants. The main settlement is Bakkagerði.

The town derives its name from the Álfaborg (Elf Rock). Some of the locals believe that the queen of the elves lives in the Álfaborg. The main attraction for visitors is hiking. Borgarfjörður Eystri is also home to a large puffin colony. Since 2004, a music festival has been put on in the summer, and is has attracted many visitors every summer since.

A church in Borgarfjörður Eystri has a painting by Jóhannes Sveinsson Kjarval that depicts Jesus on the cross on an elf hill. The local bishop has refused to bless the painting because of this. Kjarvalsstofa is a museum in Bakkagerði dedicated to the painter who grew up in the area. 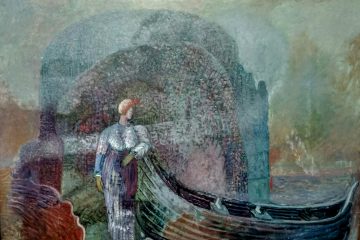