On the 14th of December, 1934, a few distinguished gentlemen gathered for a meeting in Reykjavik. The occasion was the establishment a golf club, the first one in Iceland. The club was originally called The Golf Club of Iceland but was later changed to Reykjavik Golf Club when other golf clubs where established in the country.

The idea of establishing the golf club originally came from Icelandic students studying in Denmark, where they were introduced to the game. Leading this new golf movement in Reykjavik where Sveinn Björnsson, who later became the first President of Iceland, Dr. Gunnlaugur Einarsson, who later became the first Chairman of the golf club and Dr. Valtýr Albertsson along with many others who would later became prominent members of Icelandic society. In the summer of 1935, the first tournament was held in Laugardalur, which is close to where the National Stadium is today. This, of course, was a huge occasion in Reykjavík and but thought that this was simply a temporary hobby for the upper class of society and would soon be forgotten. Those sceptics were to be proved wrong thanks to the limitless effort and passion of the club´s founding members.

The golfers were not allowed to stay in Laugardalur for very long, but instead received new land in Leynimýri. Initially, they had to share the land with cattle. When the course was opened, Ingrid, the crown princess of Denmark and Iceland, hit the ceremonial first shot to open the course. She was named guardian of the club to celebrate the occasion and still is.

The golf course in Leynimýri was 9 holes. The club house was rather small but always full of life. After 1950, the civic authorities started to look at the land, on which the golf course was built, as a site for housing and businesses rather than a golf course. Most politicians concluded that the land would be better utilized with buildings than a golf course. This decision to move the golf course has become a controversial one. Many people argue that there would have been great value in having a golf course near the city centre. All over the world, golfers enviously look at cities that have golf courses in centralized locations. Nonetheless, the city council decided to build on the land and forced the golf club to move to a rather barren area east of the city, Grafarholt.

Building a golf course in Grafarholt proved to be a very difficult task. There was hardly any soil that was usable for cultivation or let alone building a golf course. Nevertheless, the members persevered and with great effort were able to build a beautiful and challenging golf course. Play on the course started in 1963 but only on a few holes. However, more and more holes were gradually added. Today, Grafarholt is a golf course that has received international recognition, practice facilities that are second to none as well as a club house of the highest quality.

The Grafarholt golf course was designed the Swede, Nils Skold. There can no doubt that he did a fantastic job. The course is unique in that no two holes are alike. You can say that the course consists of 18 completely different holes, each with its own characteristic. This is quite unique and very exciting. Foreign golf reporters, who have played or visited the golf course, all say the same thing: “never have they seen such diversity on a golf course like there is in Grafarholt.”

The club has hosted a few international tournaments at Grafarholt. The Nordic Team Championships three times, European Team Boys Championship once and The European Senior Amateur Championship once. This more than anything shows the level of recognition that the Grafarholt golf course and Reykjavik Golf Club have overseas.

But seeing is believing, so golfers must judge the quality of course for themselves after playing it.

There has been a great increase in the number of golfers in Iceland in recent years. The sport´s popularity is always on the rise. At Reykjavik Golf Club in the mid 1990´s, the Grafarholt course could no longer handle great number of golfers playing there every day.

To cope with that problem, the club decided to build a new 18 hole course at Korpulfsstadir in 1993. Hannes Þorsteinsson, a golf course architect, was hired to design the course. There had been a small 12 hole course on the land for a number of years where members could play. Everything went according to plan and in July of 1996 play started on nine holes at Korpa. A year later the whole 18 holes were opened. The Korpa golf course was formerly opened in July 1997 when it held the national championships. The city council allocated the east end of the historic Korpulfstadir building for the golf club. Today, the club´s offices, indoor practice facilities, restaurant, pro shop and locker rooms are all located in the east end.

The Korpa golf course is 6.185 meters (6.800 yards) par 72 from the back tees. The course has its own unique characteristics. The front nine holes are played along the Atlantic Ocean while the back nine are played along the Korpa river. Many beautiful holes are on the course. Each player must tackle the challenge that this course brings in his own way. Bear in mind that the most innocuous looking holes are usually the ones that will punish you the most.

Reykjavík Golf Club is by far the largest golf club in Iceland with 2.500 members, it has two different but magnificent golf courses and it will not be long until the Korpa golf course will host international tournaments just like the Grafarholt course has done in the past. The biggest driving range in the country, Básar, is located in Grafarholt. Básar, which is a three story building, opened in 2004 and has over 70 mats to hit balls from. The club has two short practice courses, one at Korpa (Litli völlur) and one at Grafarholt (Grafarkot) where players can fine tune their short game. 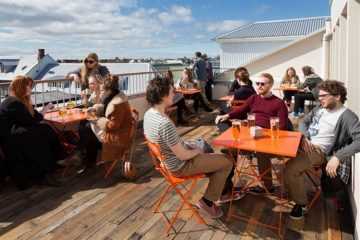 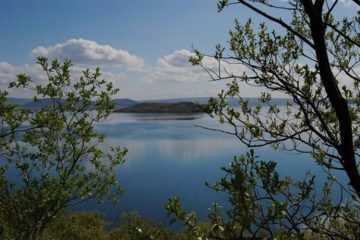