Hofsós is one of the oldest trading centers in Iceland. In the old village surrounding the harbour many of the houses have been renovated recently, giving the town a uniquely “period” look. Across the river from the harbour is the tar-coated, log-built Warehouse (Pakkhúsið), raised here in 1777 at the time of the trading monopoly.

One of Iceland’s oldest buildings, it is in the charge of the National Museum which had it renovated in the 1990’s. It is now on view in its near-original state. The renovated old Co-op now functions as the original home of the Icelandic Emigration Center (Vesturfarasetrið), housing the Glaumbaer Folk Muesum’s exhibit “New Land, New Life”, which tells the story of the Icelandic people who emigrated to North America. From June 2002 it will also house a new exhibit on the life and works of the Markerville poet Stephan Stephanson.

In Frændgarður, the Center’s new building by the harbour, there is a genealogy service and an exhibit on the Icelandic Mormons’ journey to Utah. In June 2002 an exhibit on the North Dakota Icelanders opens in another new building. Both these new buildings are in the style of the Old Warehouse, giving the old village back the feel of the trading center of by-gone days. The cove Staðalbjargavík just below Hofsós is lined with tall basaltic columns. Similar rock formations can be seen all along the shore and especially at near-by Þórðarhöfði head-land, named for the 10th century settler whose farmland is still in use today. The population of Hofsós is around 200. 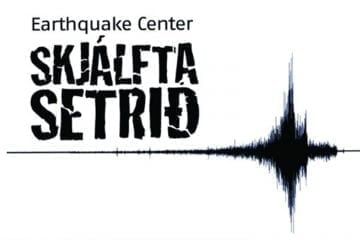