A Look at Museums in Vestmannaeyjar 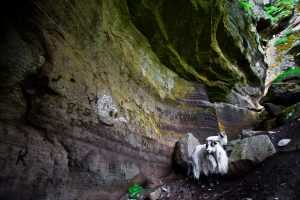 A Look at Museums in Vestmannaeyjar

Vestmannaeyjar, also known as the Westman Islands, are by far one of my favourite places in Iceland. If you have only a short time to visit the country, then consider for a moment all that this unique and charming little corner of Iceland has to offer: millions of nesting seabirds, including puffins, a still warm volcano, an authentic pirate’s cove, and some of the most spectacular views in Iceland. It is easy to get around to all the major sites on the tiny island that measures only 17 square kilometres, and  a visit to the island’s two museums is a must-do. Sagnheimar (Vestmannaeyjar Folk Museum) and Sæheimar (The Aquarium and Museum of Natural History) are located right near the centre of the island’s only town.

A Puffin Named Tóti
Sæheimar or ‘The Aquarium’ as it is called locally, is dedicated to Vestmannaeyjar’s rich maritime traditions. First opened in 1964, the museum was the first of its kind in Iceland and houses a variety of live exhibits, including a ‘touch tank’ where children can view and handle crabs, starfish, urchins, and small fish. The extensive mineral exhibit contains samples of almost every type of mineral found in the country and you can learn about Icelandic birdlife in the mounted bird exhibition. Last but not least, a puffin named Tóti, who came to the centre as an orphan nearly 4 years ago, livens up the museum with his friendly nature, funny antics and even sports a puffin-sized football jersey on special occasions, in honour of the local team. Vestmannaeyjar Folk Museum
For a more in-depth understanding of Icelandic culture, no trip to Iceland would be complete without a visit to Sagnheimar, Vestmannaeyjar Folk Museum. Popular with tourists and locals alike, the museum contains several permanent exhibitions with guidance in English and German. Highlights include exhibits about harbour life past and present in Vestmannaeyjar, the special role of women in the fishing community, the Algerian Pirate Raid of 1627 and of course an exhibit about the famous 1973 volcanic eruption on Heimaey. The museum’s highly entertaining ‘pirate cave’ allows young visitors to dress up as pirates and run amok brandishing plastic swords, giving mom and dad a chance to enjoy the rest of the museum in relative peace. Be sure to check out Vestmannaeyjar, one of Iceland’s best-kept secrets.