A look at one of Iceland’s most remote corners 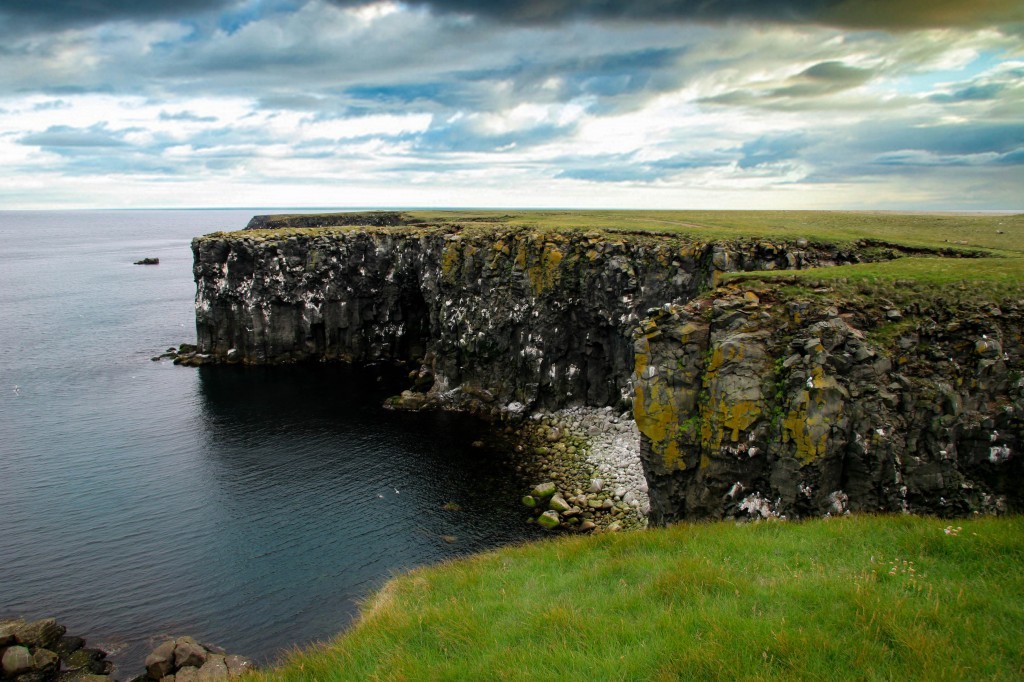 The Langanes Peninsula, on the far reaches of Iceland’s remote north-east coast stretches for 40km into the ocean and culminates with Fontur at its very tip. Popular with bird watchers, hikers and seekers of solitude, Langanes 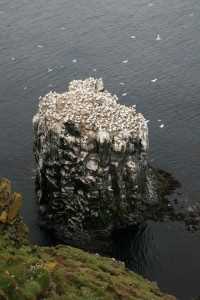 boasts the third largest gannet nesting site in the world. It is also here that thousands of kittiwakes and guillemots fly in every year in May and June to breed and congregate along the towering cliffs that make up their summer breeding grounds.

A Unique Way to Watch the Birds
In 2011, residents of Langanes put their heads together and came up with the idea of building a viewing platform, or terrace, at Skoruvikurbjarg, giving visitors a unique vantage point from which to view one of Iceland’s preeminent gannet nesting sites. The platform will extend some 10m out from the cliff that overlooks the Stóri karl column, offering visitors an impressive view of the diverse birdlife of the area. The platform will be the first of its kind in the country and is an important development in tourism in the Northeast Iceland. Construction of the platform is currently underway and the official opening is scheduled for the 3rd of May, 2014, just in time for the beginning of the breeding season. 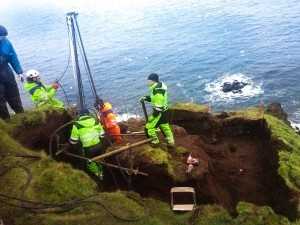 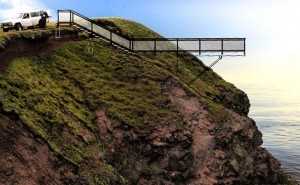 Mjölnir, the Hammer of Thor (Þór),
Legend has it, that at the beginning of time, Mjölnir, the hammer of the mighty god of thunder, Thor (Þór), was thrown into the middle of Langanes Peninsula, creating the harbour (höfn)—thus the name ‘Thor’s höfn’ (Þórshöfn). Þórshöfn Village and harbour is located at the innermost point of Þistilfjörður Fjord, by a little creek. It offers a magnificent view of Þistilfjörður Fjord and the harbour provides shelter from the north and northeast winds – the arch enemy of small boats. 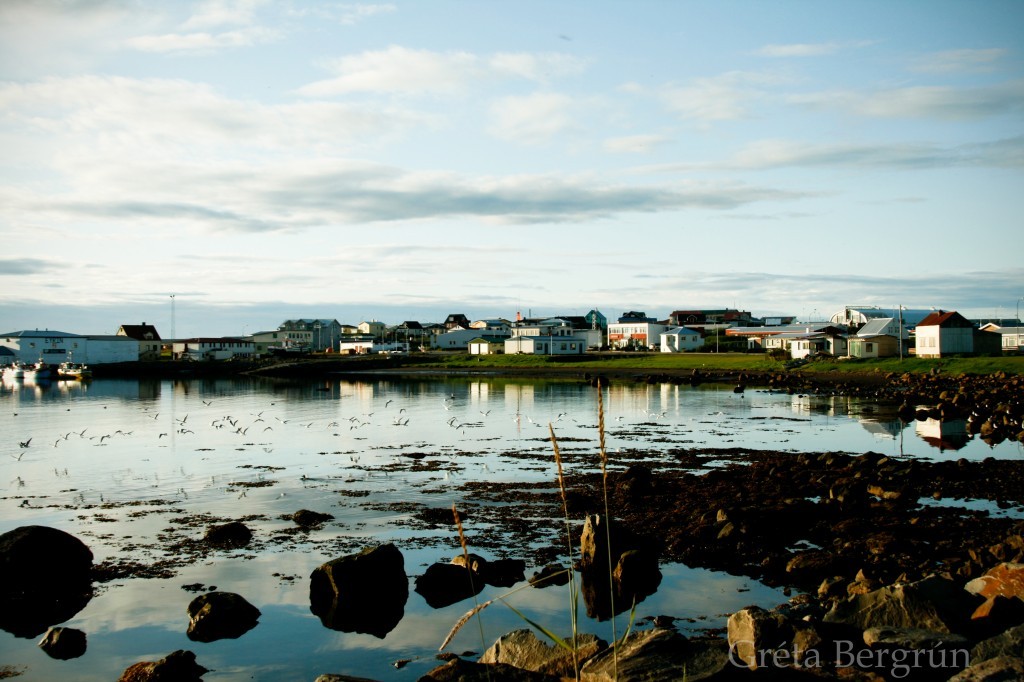 Þórshöfn Village
One can imagine Þórshöfn’s first inhabitants, surviving the harsh Icelandic winters, relying on the ocean for sustenance and surrounded by the rugged beauty of the land, with its mesmerizing and tranquil sunrises and sunsets. Life must have been a journey of great contrasts. Glimpses of those days gone by are still possible to experience in this remote corner of the Iceland. 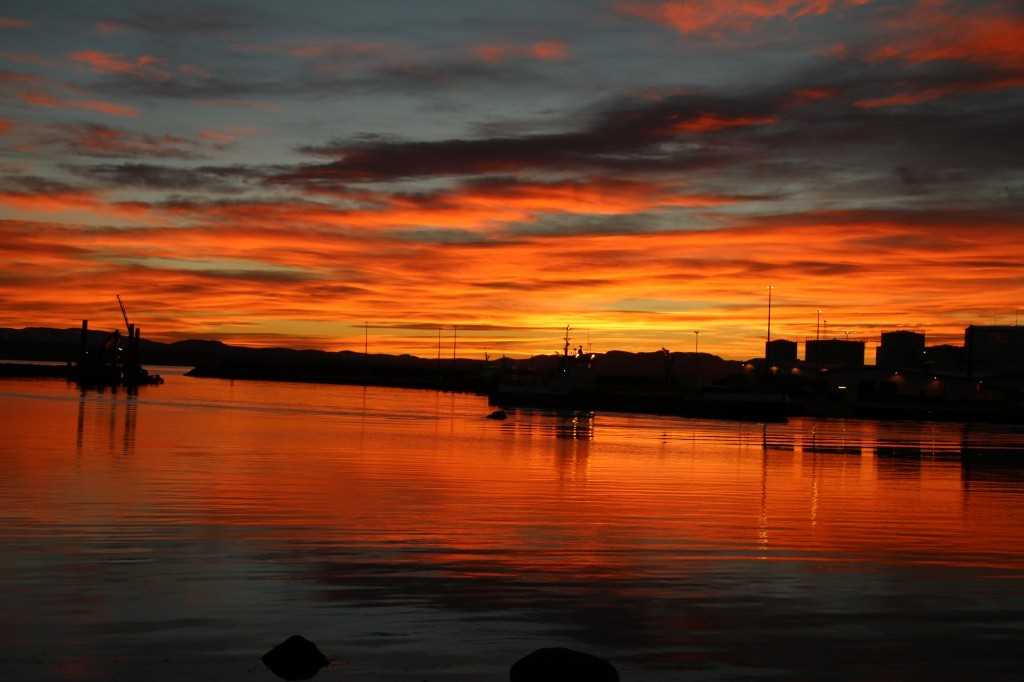 Þórshöfn qualified as a trading port in 1846 and around 1880 the first structures were built, initially as storage sheds for merchandise and later as living quarters for the merchants themselves. Up until that time, goods were traded between ships. The Langanes Co-op (Kaupfélag Langnesinga) was founded in 1911 and from that point on, the village grew quickly, expanding until the second half of the last century.

Today, Þórshöfn with a population of 388 inhabitants operates a productive fishmeal factory and a freezing plant, boasts of several charming guest houses, the beautiful Eyrin Restaurant, a gym, an indoor pool and hot tubs, which are perfect for relaxing after a long day. 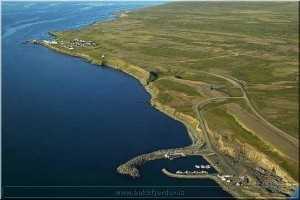 It received its trading license in 1885 and gains its livelihood from fishing, fish processing, commerce and services rendered to the agricultural community.

Although the old pier in the village centre has given way to a picturesque harbour, a crane, which was once used to hoist fishing boats in and out of the water stands idle on the old pier, serving as a silent tribute to Bakkafjörður’s past.

From the old harbour, you can fish for cod and local fishermen take visitors sightseeing out on the fjord in their small fishing boats when the weather is fine. For the more adventurous, Bakkafjörður Fjord is considered to be a great location for kayaking, and in summer, the camp site has proven popular as well.

Then there is the swimming pool at Selárdalur with its impressive views of the surrounding mountains. 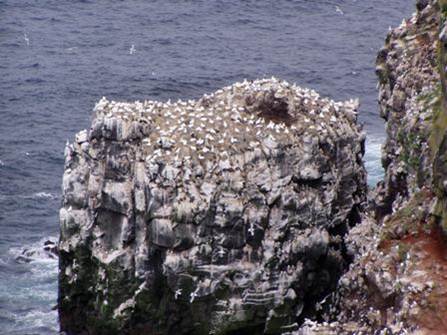 During salmon fishing season (June through September) pool-goers can watch as anglers try their luck in the Selá River just below the swimming pool.

Langanes Municipality is one of Iceland’s hidden gems, where the beauty and soul of the small fishing villages lives on.