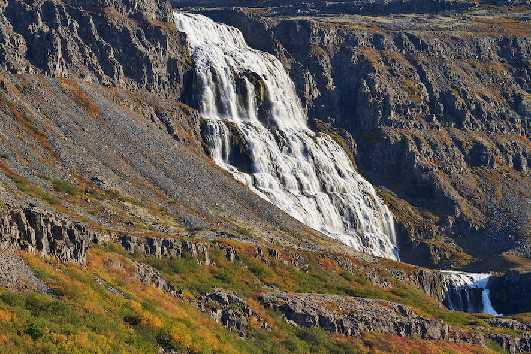 FThe waterfall Dynjandi is called by some Fjallfoss, which is probably a misnomer. The small waterfall below Dynjandi in the picture is called Hæstahjallafoss.

The Dynjandi waterfall in Arnarfjörður in the Westfjords is one of the most beautiful waterfalls in the country. It falls 100 m / 331 ft down from the mountain edge of Dynjandisheiði down to Dynjandisvogur. At the top, the waterfall is 30 m / 98 ft wide, but it is half as wide or 60 m / 196 ft at the bottom. There are seven smaller waterfalls below Dynjandi, they are called (counted above): Hæstahjallafoss, Strompgljúfrafoss, Göngumannafoss, Hrísvaðsfoss, Kvíslarfoss, Hundafoss and Bæjarfoss. But the Dynjandi farm, below the waterfall, where the car park is now, was inhabited from the middle ages until 1951 when it was deserted. The waterfall and the surrounding area were protected in 1980.