Leaders in the Geothermal World – ÍSOR

Winters in the Northern Hemisphere have short days and long hours of darkness. At the beginning of the 20th century, matters were made much worse by the use of coal to heat homes and run industry. Reykjavik’s skies were blackened by dark clouds of pollution, like many other countries.
However, by 1928, Reykjavik’s skyline was about to change. Iceland was one of the first countries to recognise the potential of geothermal energy and exploit it for domestic heating. Advances in research and technology led to a slow decline in CO2. In 1975, the number of houses in Reykjavik connected to the hot water rose to 96% and carbon emissions plunged to approx. 20,000 tonnes/year. Improvements continued and today, with nearly every house connected, emissions are negligible and the skies are completely clear once again. Foundation of Specialization
Research and development in the geothermal field has been spearheaded by Icelandic engineers and academics, working together with industry and the power companies. In 2003,Iceland GeoSurvey or ÍSOR, was spun off from its parent company, the National Energy Authority of Iceland, Orkustofnun, and tasked to provide research, training and consulting services worldwide to the geothermal industry, much of it hands-on in the field. 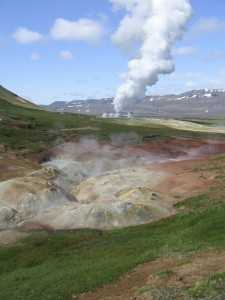 Education and Training
ÍSOR has become the leading provider of scientific and technical expertise, not only in Iceland but throughout the world, based on over 60 years experience.
Iceland GeoSurvey handles the major part of teaching at the UN Geothermal Training Programme, taught both in developing countries, at the University of Iceland, Reykjavik University and REYST. Engineers are trained to PhD level and graduates maintain close contact once in the field in their own countries. Since 1979, ÍSOR has trained over 480 engineers, working in Africa, Asia, Europe and Central and South America.

Geological Mapping
For several decades now, ÍSOR’s specialists have been involved in creating highly detailed geological maps all over Iceland for the energy companies, municipalities and private clients.
As part of their remit for education, they have recently published a map of the Reykjanes peninsula in S.W. Iceland for the general public – the first of a projected series.
Their mapping techniques are now being used in Ethiopia, in the northernmost part of the African rift valley. 2011 also saw the start of a cooperative project with nine northern European nations and participation in the European Thermomap research project, which aims to obtain and harmonize geographical information to assess the prospects of harnessing heat from the upper levels of superficial deposits. 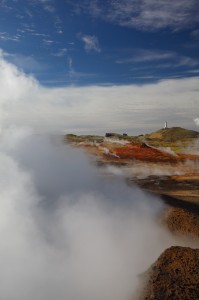 Countries using Geothermal Energy
After a slow start in the 2oth century, more countries have are recognising the potential of harnessing geothermal energy. In 1985, 24 countries were using it. By 1995, there were 28, with 38% of production coming from developing countries. By 2000, there were 58 countries, with 47% of the world total production coming from the developing world.
Capacity has also expanded considerably. In 1995, Iceland produced 50 MWe, but by 2000, this had risen to 170 MWe. World production in 1975 was only 75 MWe but saw a 500% increase in the following 5 year period to 462 MWe, a further 223% rise to 1495 MWe by 1984 and 150% by 2000. A very large part of this increase is attributable to the efforts of Iceland GeoSurvey’s engineers and their graduates.
Although state-owned, it is a self-financing, non-profit organisation that receives no direct government funding.
In 2011, almost one third of Iceland Geosurvey’s revenue came from abroad, with its main projects being in Chile, Croatia, Dominica, Ethiopia, Kenya, Nicaragua and Turkey.