In September the majority of farmers across the country will be herding their sheep from the plateaus of Iceland, which have been roaming freely in the wilderness throughout the whole summer. The sheep round-up is an annual event that most farmers look forward to as it will reveal the results of the quality of their year’s production. The occurrence also serves as a major social setting and is typically enveloped with good spirits (partially from flasks being passed around), gatherings of friends, rejoicing of neighbours and, of course, some singing and dancing. And the younglings love to take part in the gaiety.

So how does this whole process work? How on earth can farmers simply let their domesticated sheep go, and then expect to reclaim them again by the end of summer? We did some research to unveil the secrets surrounding the roaming sheep, which most travellers have encountered on their journey in the countryside of Iceland. 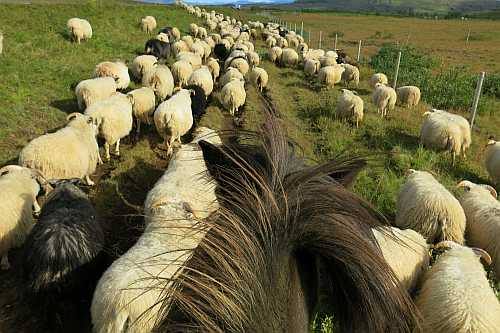 Born to Be Wild….

Once a dam gives birth to a lamb, she is commonly kept inside the cowshed for the first two weeks, followed by a two week adjustment period on the farmland. After that the magic begins. Depending on the location of the farm, it is often enough for the farmers to simply open their gates to the wild and the sheep will know what is expected of them – to leave the farm. Some farmers may need to transport their sheep in trucks to the heaths to set them free. The dam will guide her lamb to succulent grazing grounds where she and her young will feed of forbs, seaweed, heather and sometimes on the leaves of the short-statured birch spinney. Any type of sprout is their particular favourite. They will cover large areas on their journey without ever coming in touch with fertilised pastures. This all-natural superfood will result in remarkable growth of the lamb. It is common practice to free the sheep in early June, when the lamb weighs about 7 kg (approx. 15 lbs). Once the sheep is collected in September or early October, on average the lamb will have gained a staggering 35 kg (80 lbs). This amounts to almost 400 g of added weight per day – and hence the lamb will have sextupled its weight in only three months! Of course weather conditions play a major role as the weight gain of the lamb is directly correlated to the sprout of the vegetation. 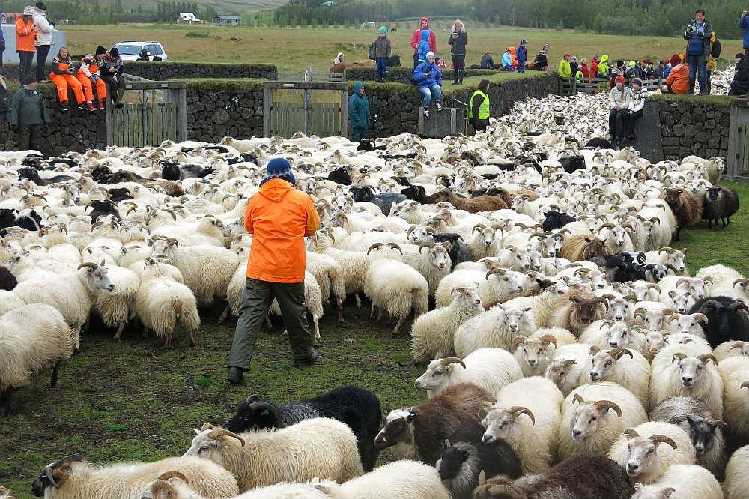 Once it is time to herd the sheep from the summer feeding grounds a good organisation comes in handy. The sheep herders will comb the areas against the borders of their neighbouring parishes. Farmers are assigned a certain amount of workdays depending on the number of winter-fed sheep they keep. The more sheep, the more manpower they possess and thus a larger search area, measured in workdays, is assigned to them. But here’s where the farmers’ experience is paramount. Most farmers know their sheep and their habits so they have a pretty good idea of their whereabouts beforehand. Amazingly, the good knowledge of the dams gets passed on through generations, and the ewe lamb, once grown up, will eventually follow her mother’s path and lead her own younglings to the same locations. Once all the sheep from the region have been gathered into the fold, the sorting begins. Thankfully, each sheep is carefully marked to ensure the rightful reclamation by the farmer. A fully grown brood ewe will have three types of markings; a mark on her horn to refer to her province, a plastic label in her ear to refer to her district and an earmark which pertains to the farmer. Not only do the thorough markings ensure the reunion of the sheep and owners but they also play a key role in preventing theft.

Once all the sheep have been accounted for, the farmer will eagerly tout the sheep to their homeland. Though they try to make an effort to keep their herding limited to country roads, riding trails and beaten paths, they are sometimes forced to use the main roads. In which case you might come across a traffic disturbance that will look quite unconventional. 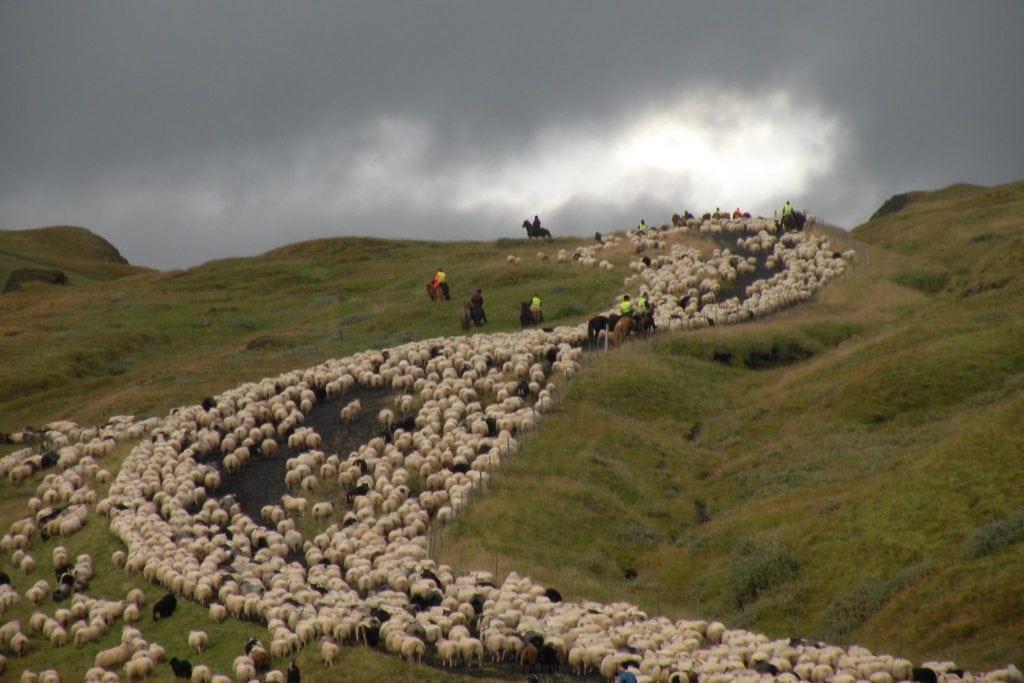 Do drive carefully when exploring the countryside of Iceland – not only during the round-up season, but throughout the summer, at the time when the sheep roam free. Most accidents occur when the lamb attempts to follow its mother to the other side of the road, jumping without warning in front of passing traffic. If you are met with the unfortunate tragedy of driving over a sheep, please be kind enough to notify the appropriate authorities 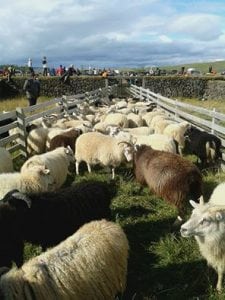 about the mishap. This will inform the farmer about the loss or allow for necessary measures to be taken, such as providing medical care for the sheep. Most farmers will not insist on any penalties to be paid as they are already insured for such causalities.

Whilst travelling the beautiful countryside of Iceland you will without doubt come across free ranging sheep, either close-up by the side of the roads, or at the very least, as white clouds dressing up the landscape from afar. They certainly put their mark on their surroundings and have served as inspiration to Icelandic artists throughout time.
-Edda Snorradóttir