Looking for an affordable hotel or hostel in Iceland? Base Hotel is a budget hotel conveniently located close to Keflavik Airport on the Reykjanes Peninsula at a former NATO base used by the US Navy and US Air Force until 2006. The hotel is actually located in buildings that used to be inhabited by US Navy and US Air Force families, hence our overall theme of retro, quirky touches, artefacts and photographs. BaseHotel is the perfect hotel for short stopovers in Iceland and as a base for exploring the Reykjanes Peninsula and Southwest Iceland. Our affordable rooms cater to all types of travelers; couples, group of friends and families with children as well as lone wolfs, seekers, trekkers and party people – peace lovers and hippies are of course welcome. We offer hostel-style bunk rooms for the very cost conscious traveler, suites for the private but thrifty and anything in between for all explorers who simply like to stay within their budget without sacrificing a comfy bed and a good night’s rest.

Your base in Iceland

BaseHotel seeks to celebrate the history of “the Base” while offering cheap accommodation near Keflavík airport providing guests travelling to Iceland the perfect base to explore the Reykjanes Peninsula. Whether you’re stopping in Iceland for only a night or for a whole month the Base Hotel is conveniently located close to Keflavik Airport adding extra comfort and ease to your arrival and departure days.

US forces arrived in Iceland in 1941, taking over from the British occupation that started the year before. This was World War II and soon after it ended, in 1947, the navy left, but only briefly. A few years later, in 1951, Iceland signed an agreement with the US permitting the continued presence of the occupation forces in Iceland. You see, Iceland didn’t have a navy, never has, and probably never will, and the growing world tension, the Cold War with the Soviet Union, had Iceland’s leaders thinking they might need someone to guard the island. For the next 55 years Iceland was defended by the US Navy and US Air Force.

There was an airport at Keflavik before the navy arrived but after signing the agreement the US took over all maintenance and operation of that airport building it up for maritime patrol activities, air defense and in addition, supporting Iceland’s international civilian aviation. Every time Icelanders went abroad they had to pass through the Base, but today we have our modern, much bigger airport next to the base.

There wasn’t a town when they got here, but there was a town when they left. The navy men and women lived at “the Base”, now known as Ásbrú, on Reykjanes Peninsula, with their families. They had their own schools, movie theaters, hospitals and shops, anything that a regular American town could want or need and at its peak over 5,000 people lived here, making it one of the biggest towns in Iceland, outside the capital area. The area was buzzing with navy life and air traffic.

In 2006 the US navy decided to close their Keflavik base and on September 30th that same year the last remaining soldiers left the Base. The navy left furniture, artifacts and cars behind and the base became an eerie “ghost town” for some time.

Today the old Base is one of the fastest growing residential areas in Iceland with over 2,000 people living on site and many more working or studying here. Several companies have also opened up here, many of them built by innovative entrepreneurs. The Base was given the name Ásbrú and much has changed since the navy left. Today, you may discover that ballet classes are being offered to children in what used to be an ammunition storage room or find an international music festival held in a former aircraft hangar. 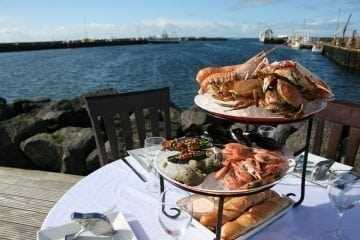