The many glaciers of Iceland are an essential part of its identity, which should come as no surprise as they cover more than one-tenth of the country. Each glacier has its own character, its own history, its own folklore and geological features and some of them sit on top of active volcanoes ready to erupt at any time, with possibly catastrophic consequences. Most Icelanders have, however, become used to these sleeping giants in their backyards and regard them with reserved awe and respect. Scaling a glacier is an experience many travel great distances to accomplish, but they can be deceiving as there are many hidden dangers and it should not be attempted without thorough preparation and consultation with professionals. Though they may look stoic and peaceful, glaciers are constantly moving and changing; creating new fissures, cracks and crevasses, creating great hazards for potential climbers and if you think the Icelandic weather can be unpredictable and unforgiving – it only becomes more extreme on top of a glacier. But these dangers and hostile environments only make for a more satisfying experience.

Here are the 10 largest glaciers in Iceland: 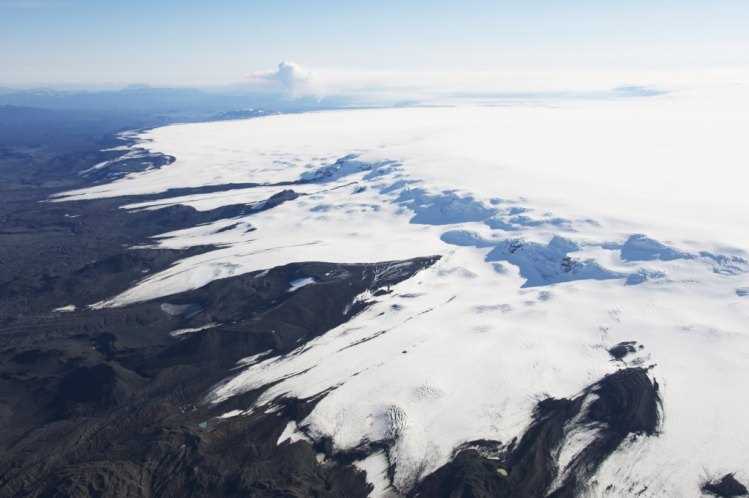 The titan of Icelandic glaciers is undoubtedly Vatnajökull glacier, which, by itself, covers 8% of the country’s landmass and includes Iceland’s highest peak at 2,109.6 metres (6,921 feet) and several active volcanoes. Vatnajökull is located in the south-east of Iceland, covering an area of 8,100km² (3,127 square miles) with a volume of 3,100km³ and averaging 400-600 metres (1,300-2,000 feet) in thickness, making it the largest glacier in Europe by volume and second largest by area. This sleeping giant turns its many heads from time to time with its seven active volcanoes. Grímsvötn is the most famous one as it erupts with the most regularity, with two eruptions already in the 21st century. Other notable volcanoes are Öræfajökull, Kverkfjöll and Bárðarbunga, the biggest one of them all. It is believed that all of these volcanoes are connected and that volcanic activity in them come in spurts, as it were, and that we are now in the beginning stages in such a spurt. Vatnajökull is an integral part of the ecosystem surrounding it, as immense amounts of water flow from it in all directions, creating powerful rivers, majestic waterfalls and glacial lakes. All of these are contained within Vatnajökull National Park, which has four different service centres – one for each cardinal direction. 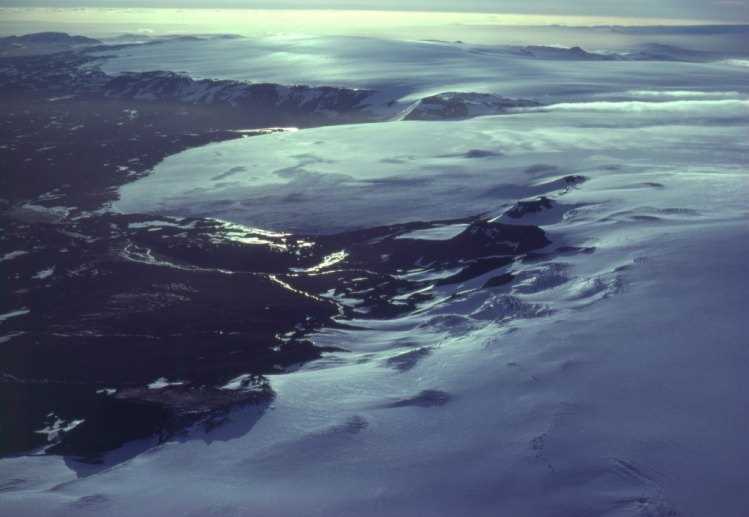 The second largest glacier in Iceland is located in the west of the Icelandic highlands is the aptly named Langjökull, or simply ‘Long Glacier’. It covers 953 square kilometres (368 square miles), with a length of about 50 kilometres (31 miles). The highest peak of Langjökull reaches about 1,450 metres (4,760 feet) above sea level. Langjökull contains two volcanic craters and a charming geothermally active area, named Hveravellir, can be found east of the glacier. Until recently it was only possible to experience the power of an Icelandic glacier by either looking at them or standing on top of them, that was until a group of entrepreneurs decided to make an ice tunnel going into the glacier. Starting in 2015 it thus became possible for visitors to walk into Langjökull glacier, touching its core and feeling the massive ice all around. Situated between Iceland’s two largest glaciers is Hofsjökull, Iceland’s third largest glacier. It covers an area of 925 square kilometres (357 square miles) and reaches 1,765 metres (5,800 feet) at its summit. Hofsjökull is quite striking in the landscape, with its round shape, its many glacial rivers flowing from it and prominence, visible from all directions. Beneath the 700 metre thick sheet of ice lies a large caldera, although there has not been substantial volcanic activity in recent times. 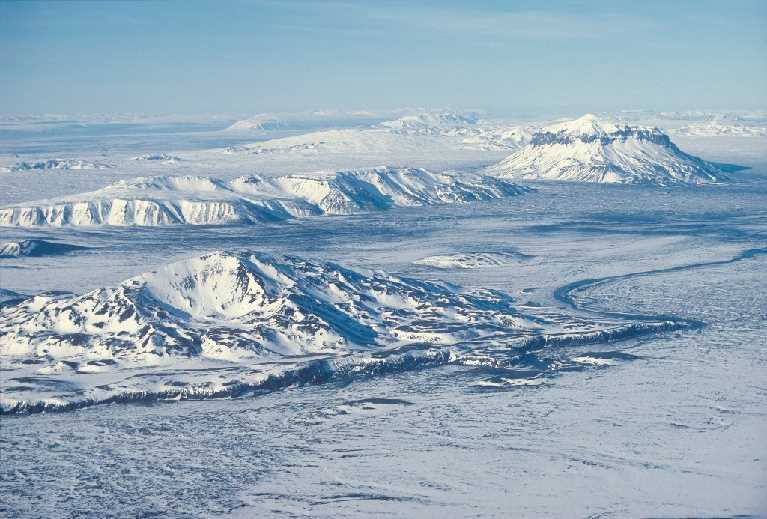 In the south of Iceland, north of Vík í Mýrdal, you’ll find the fourth largest glacier in Iceland – Mýrdalsjökull. It covers an area of around 600 square kilometers (232 square miles) and reaches 1,493 metres (4,898 feet) at its peak. Mýrdalsjökull partially covers the Katla volcano that erupts every 40-80 years and but which has not erupted since 1918, so it’s long overdue. In the same volcanic system you’ll find the world’s largest volcanic canyon named Eldgjá, or Fire Canyon, 270 metres deep and 600 metres at its widest. 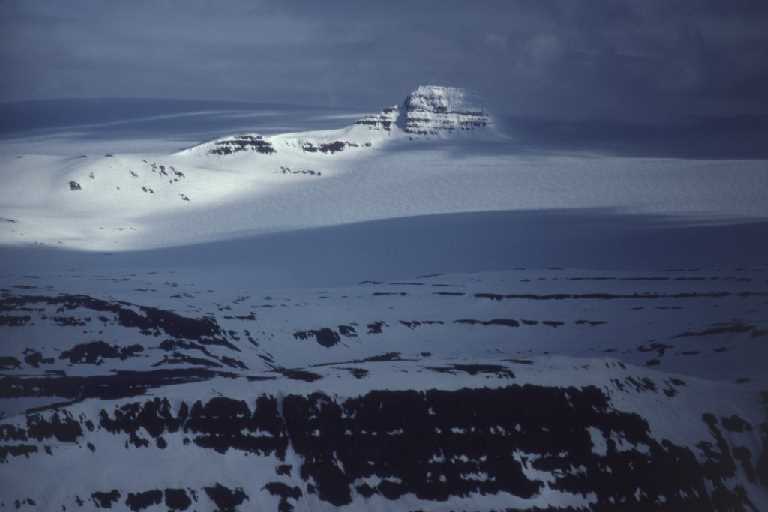 Iceland’s northernmost and fifth largest glacier is located in the remote Hornstrandir peninsula in the Westfjords. Drangajökull is unique in Iceland as it is the only glacier not to have shrunk in recent times. It covers an area of around 160 square kilometers (62 square miles) and is the only Icelandic glacier that does not reach a thousand metres in height.

Arguably Iceland’s most infamous and unpronounceable glacier is Eyjafjallajökull, an ice cap covering a volcano reaching 1,651 metres (5417 feet) at its summit in the south of Iceland. The volcano is relatively active and last erupted in 2010 creating a gigantic cloud of ash that grounded air traffic all over Europe, disturbing the travel plans of hundreds of thousands of airline passengers and causing extensive damage to businesses worldwide. It should be noted that eruptions in the Katla volcano in neighbouring Mýrdalsjökull are usually preceded by an eruption in Eyjafjallajökull, so airline passengers and international businesses might not have seen the worst just yet. A popular, yet difficult, walking route, named Fimmvörðuháls, lies between Eyjafjallajökull and Mýrdalsjökull.

Tungnafellsjökull covers the round and steep Tungnafell mountain northwest of the Vatnajökull glacier. The glacier is around 50 square kilometres and reaches 1,392 metres (4,567 feet) at its peak. Tungnafellsjökull’s volcanic activity is barely existent, but some minor activity has been recorded in recent years.

To the southwest of Langjökull lies Þórisjökull, with an elevation of 1,350 metres (4,430 feet) and covers 32 square kilometres. Þórisjökull is situated between Langjökull and the volcano Ok. In between lies one of Iceland’s highest mountain roads. Kaldidalur is in front of the glacier and it is possible to hike from its highest peak up to about 700 metres on the glacier. It is named after a troll from the Icelandic sagas who is supposed to have lived in a cave in the glacier.

North-west of Langjökull is Iceland’s largest table mountain, covered with it’s ninth largest glacier Eiríksjökull, with an area of 22 square kilometres (8.5 square miles) and reaching a height of 1,675 metres (5,500 feet). The mountain was created in a subglacial eruption which penetrated the ice, but it is dormant today. Not everyone agrees on where the name comes from, although some sources say a group of outlaws had taken up residence in cave in the mountain and subsequently started raiding surrounding areas. A group of farmers then is supposed to have caught them by surprise in the cave and killed all of them except one – Eiríkur – and even though they managed to cut of his leg, Eiríkur is supposed to have escaped using his hands and fled the country. A tall tale indeed.

Observant readers will have noticed a lack of glaciers ten through twelve, but it’s not all about size after all. Snæfellsjökull makes up for its relatively diminutive size with mysticism and literary fame. It rose to fame in Jules Verne’s classic, ‘Journey to the Centre of the Earth’ in 1864, where it was introduced as an actual entranceway to the centre of the world. Even though not many are actually looking for that entrance, many are captivated by the spectacle that inspired Verne to write his classic. It’s grandeur even inspired a bizarre alien greeting ceremony in 1993, when a group of five hundred people from all over the world gathered on its peak to welcome alien visitors they were sure would arrive there at a specific time and date – they at least got to enjoy the view – though the aliens, predictably, did not show up. Located on the tip of the Snæfellsnes peninsula, it is actually technically not a glacier any more as, in the summer of 2012, snow disappeared from its peak for the first time in recorded history. -VAG