In the north of Snæfellsnes peninsula lies the beautiful town of Stykkishólmur, the center of services and commerce in the area. Centuries ago, the town became a center for trading, transportation, culture and service for the Breiðafjörður bay, resulting in many of the town’s houses being older than most houses in Iceland. Those old and colorful houses, standing in the old town of Stykkishólmur, form a beautiful unity, which is a sight to behold. Stykkishólmur remains to this day the cultural center of the area, a good example of which is the Volcano Museum, which concentrates on the cultural and artistic representation of this strong eruptive force in Iceland. 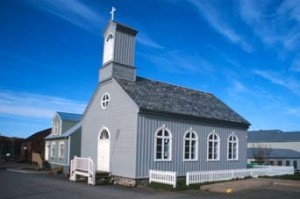 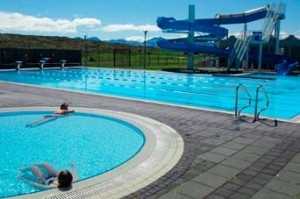 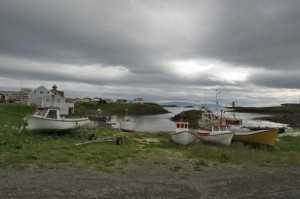 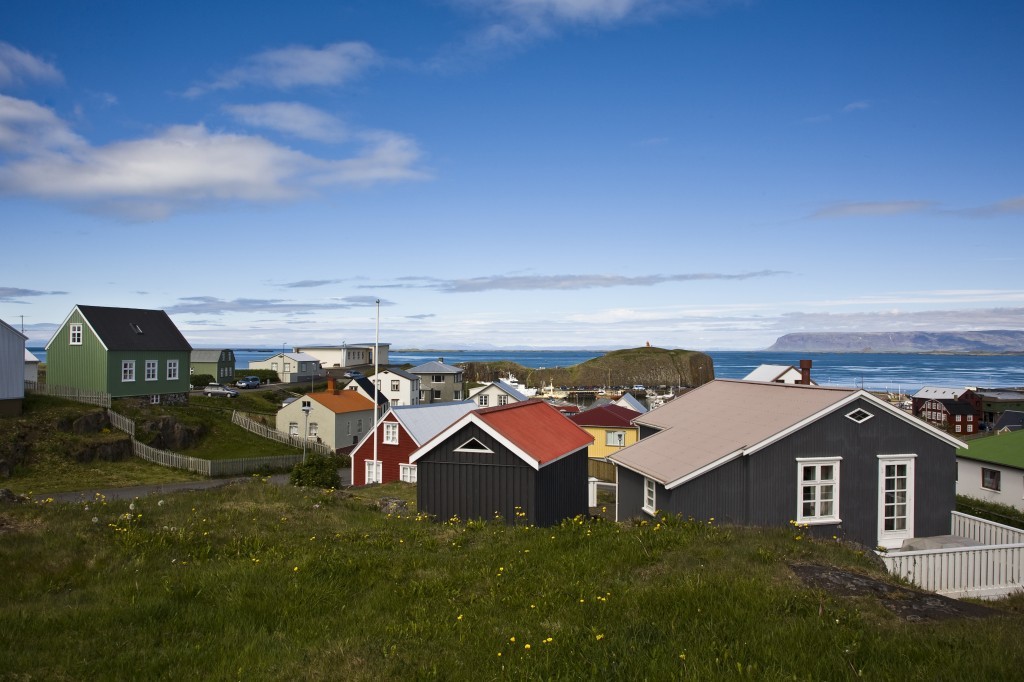 The Town by the Bay of Thousand Islands
The people of Stykkishólmur have put a great deal of effort into preserving the town’s old houses, which therefore have a great influence on the appearance of downtown Stykkishólmur. The town has also concentrated on being environmentally sustainable, for which the town has received a “Green globe” certification.
Stykkishólmur is an ideal place to dwell in if one wants to travel along the Snæfellsnes peninsula as everything can be found in a convenient driving distance. You also have all the services you need in one place, various accommodation options; all sorts of activities and culture; restaurants, supermarket and a swimming pool. Stykkishólmur lies at the bay of Breiðafjörður, which has an uncountable number of islands, rich in wildlife and natural wonders. One can cross the bay of Breiðafjörður with the ferry Baldur, towards Brjánslækur on the Westfjords. Baldur also stops at the bay’s most famous island, Flatey, where there is a cute little village with a long history. Various tours around the bay are on offer in Stykkishólmur if you wish to witness this lovely bay of islands. 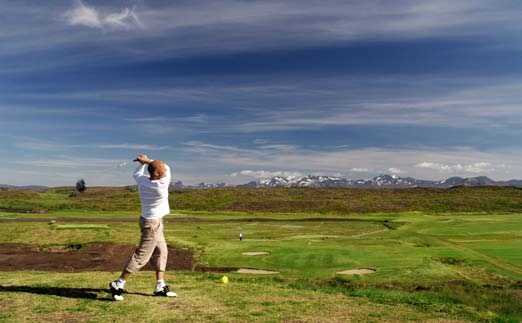 Healing Hot Tubs
The swimming pool in Stykkishólmur is quite recent and contains a lot of options, especially for the kids. There is both an indoor and an outdoor swimming pools, various options of hot tubs and last but not least, one of the biggest water slides in Iceland. In addition, the hot tubs have certificated pure water that comes straight from the borehole.
The water is famed for its healing powers, as it is full of minerals and works well for all sorts of skin problems. The inhabitants of Stykkishólmur, or “hólmarar” like they are called in Icelandic, had always suspected that there was something magical about both their cold and hot water, which was proven to be the case when a German water organization examined the water.

The camping site in Stykkishólmur is brand new, situated next to the Stykkishólmur’s golf course. The Golf club Mostri has a 9 hole golf course and its golf center is actually located within the boundaries of the camping site. This area is on the right side when one drives into Stykkishólmur The Picturesque Town of Stykkishólmur –See Volcanoes Beautifully Expressed in the Volcano Museum and is in a walking distance to all services. So if you want to combine your enthusiasm for golf with the enjoyment of camping around Iceland, Stykkishólmur could not be a more convenient place to visit. 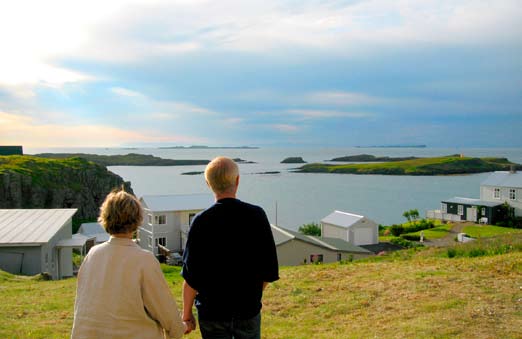 History and Ice
History and culture are prominent in Stykkishólmur as the town has three museums. In the “Norwegian house” you will find the district museum of Snæfellsnes. There you can find various information about the region and its history. The house itself was built in 1832 by Árni Thorlacius, who was a merchant and ship owner in the 19th century. 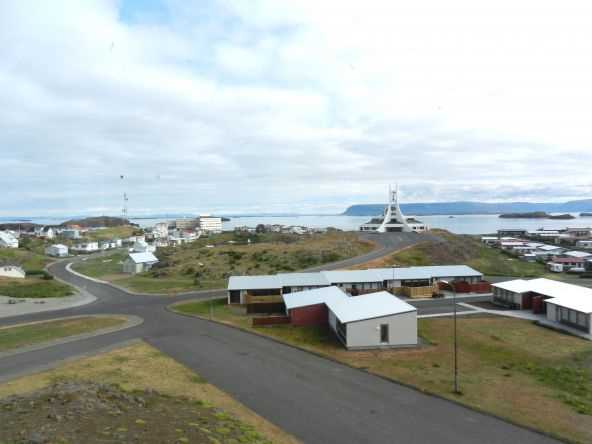 Stykkishólmur has also two fine museums that represent the two strong elements of Icelandic nature, ice and fire, in both original and conventional ways. In the case of ice, on the highest point of Stykkishólmur, where the view is amazing, the old town library has been changed into a museum of water, weather and words. You will find in the museum 24 glass columns with specimen of water from all the primary glaciers of Iceland. It is made by the American artist, Roni Horn, who is known for the emphasis on water and ice in her art.

Volcanoes expressed throughout time
At this moment the newest museum in Stykkishólmur, the Volcano Museum, is without doubt quite interesting for all travelers visiting Iceland. There, you can not only learn about everything connected with volcanoes, eruptions and other geological matters, but alsosee how these strong forces of nature have been expressed through the centuries, not only in Iceland but also around the world. 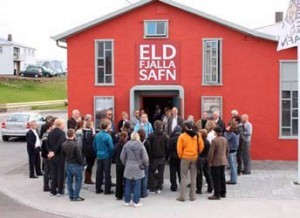 The Volcano museum just opened last year and is still expanding its activity. It is open from 11-17 during the summertime and you can get an introductory talk daily from one of Iceland’s finest volcanologist, Haraldur Sigurðsson. His talks are about volcanoes and their impact as well as geology in general, suited for those having minor knowledge of the field. But the academic geology is not the main factor in the museum. According to Haraldur, the aim is to blend together the cultural, geological, historic and environmental context of volcanoes. Haraldur has himself researched volcanoes all over the world and has on his voyages collected various items and art work connected with volcanoes. Those items come from miscellaneous countries like Japan, Italy, Indonesia, Mexico, islands in the Caribbean Ocean and of course Iceland and are exhibited in an international exhibition in the museum. One can also go on a geology excursion around the Snæfellsnes peninsula, which are organized at the Volcano museum. Snæfellsnes is of a great variety geologically speaking, so great that one could say that the peninsula is a sort of a pocket book version of all the geological variety of Iceland. The tour will also provide a comprehensive picture of the geology and geomorphology of the region. The rich history of the Snæfellsnes peninsula will also be described, especially in connection with the Icelandic sagas.

Right now a new exhibition has just opened in the Volcano museum, which obviously has the theme: Eyjafjallajökull. There are many photographs of both the eruption in Eyjafjallajökull and its consequences as well as of the minor eruption on Fimmvörðuháls. In this exhibition you can see photos from one of Iceland’s most renown photographer RAX, or Ragnar Axelsson, who has dedicated his career as a photographer to the nature of Iceland. You will also see the first art work of the eruption by Vignir Jóhannsson, who has painted the eruption in watercolors.

Whether you seek activities, culture, relaxation or even geological enlightenment, you will find it in Stykkishólmur. This picturesque town by the bay has a lot to offer, not only all the services you will need, but also a comfortable location in an interesting region of Iceland.

More information is available on www.stykkisholmur.is