Ísafjarðardjúp bay is often referred to as the “gold coffin” because of its rich fishing grounds and abundance of seabirds. During harsh times the bay provided people with food while in other parts of the country people were dying of starvation. The bay becomes brimming with live in the summer time as it gets filled with krill, fish, both large and small, and thousands of seabirds that feed on it. This also attracts one of the largest animals on the planet, the humpback whale and it´s rather small relative, the minke whale. There are about 100 thousands pairs of puffin that breed in the bay every year. The island of Vigur, the second largest island in the bay and one of the largest puffin colonies in Iceland, has 40 thousand pairs nesting. It also has large colonies of eider ducks and artic tern. The birds feed on small fishes like sandeel, herring and capelin. If the puffin and other seabirds are seen in large flocks on the water eating, it is very likely the whales are close by.

Seals are common the Ísafjarðardjúp bay. When the tides are low, they can be seen lying on the rocks along the coast line, enjoying the warm summer sun. When the tides get high again, the seals dive into the water in search of food. They mainly live on cod, herring, mackerel and on crabs and shrimps. Sometimes they even go up rivers to catch trout or salmon.

We are here to help you enjoy the Amazing Nature of the Westfjords. You may drop us a line, or send an email, choose what suits you the best. 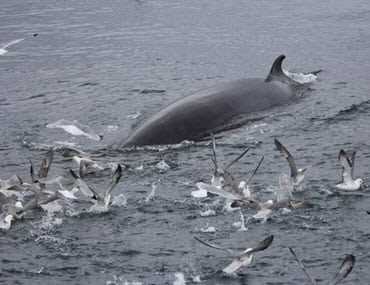