Strong and hardy, Icelandic Sheep contributed to the nation’s survival 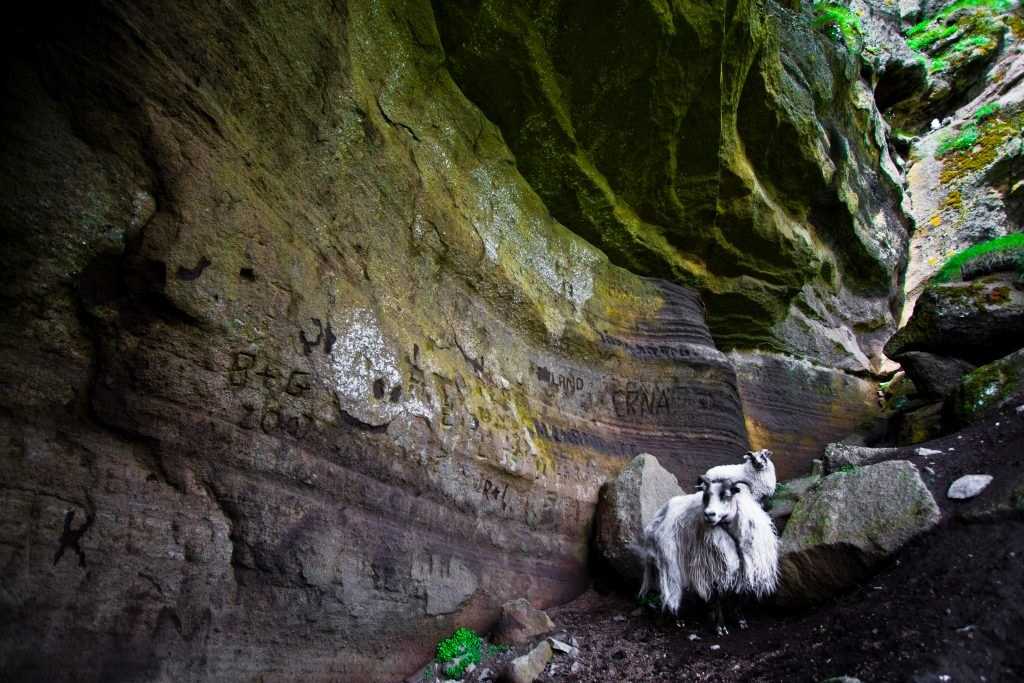 Sheep. They seem to be everywhere, wandering freely all over the mountains and highlands as if they own the country. They are one of the most common animals in Iceland.
Icelandic sheep are so called short–tailed animals, an ancient Nordic Breed which was formerly common in the north part of Western Europe, but now only found in a few areas of the world. It is a strong, hardy breed which has adapted well to Icelandic conditions. The Icelandic sheep is special in many ways. Part of the breed is called ‘leader sheep’ and possesses unique qualities, not found in any other sheep breed in the world. Many stories have been told of their rescuing both men and other sheep from danger.
Around 1980, there were about 10 times more sheep than people in the country or around 2,000,000 sheep (including the summer lambs) and 226,948 inhabitants. The number has now been reduced by almost half, because of overgrazing in some cases but also market developments.  In former times, sheep were allowed to graze freely all year round, even in winter. This had disastrous effects when the climate became cooler. The interaction of natural forces: water, wind, fire and ice, as well as the encroachment of men and animals has, in the course of time, disturbed the layer of surface vegetation. When destroyed, a chain reaction of soil erosion begins which is difficult to stop. This shows how hard the struggle for survival has been in Iceland. The sheep has been called one of the keys to survival the country in the old times. The animals could survive on winter grazing, and the people fed themselves on their meat and milk and made warm clothes from the wool.
Since the last decades of the 20th century, steps have been taken to fight erosion by reforestation, reseeding and other programmes to protect sensitive areas from overuse by men and animals. Government regulation now prohibits unsustainable use of land. One of these steps has been to reduce the number of sheep so now there are 475,000 adult sheep in the country or 1,100,000, including the summer lambs.

Lambing Time
The mating season is in December. The farmer registers the individual matings, and their dates. So when the lambing season starts, he can look into his book to see who their father is and on which dates his lambs are due. It’s important to know the date of delivery so that he can keep the mother indoors when she gives birth and to be able to shelter the newborns on their first days. Each farmer has a special earmark, cut into one of the lamb’s ears soon after its birth. This traditional book-keeping method would make it easy for farmers to provide a genealogical tree of the meat you are purchasing! Today, the lambs are also tagged with modern plastic eartags. Nowhere else in the world are sheep bred by this method because in most countries the sheep simply have their lambs outdoors and no one knows anything about their genealogy. The lambs are born in May and stay with their mothers all summer long. After the first few days indoors, they graze on grass fields on the farm for 3-4 weeks. Then they are sent out to graze the hills and mountain pastures all over the country, running free until the middle of September, feeding on the rich and nourishing vegetation. During the intervening time, the farmer harvests the hay to feed his sheep during the winter. Only about 1% of Iceland is cultivated. This means that most of the grass and plants the sheep feed on is wild.

The Réttir (Round-up)
Farmers gather their flocks in the autumn. Systematically, they round up the sheep all over the country. There is practically no place in the wilderness of the highlands of Iceland where sheep cannot be found during the summer—except maybe on the glaciers. The round-up is conducted on horseback or on foot with the assistance of sheepdogs. The entire process may take up to a week and, during this time, participants stay overnight in mountain huts, where they pen in the sheep they have gathered so far, then hang up their damp clothes, uncork their hip flasks and swap stories and songs.
When the search is over and all the sheep are accounted for, the fat frisky lambs, ewes and rams are herded down to the lowlands and into a corral called a ‘réttir’, where they are identified by their earmarks and sorted into the correct pens, belonging to individual farms. 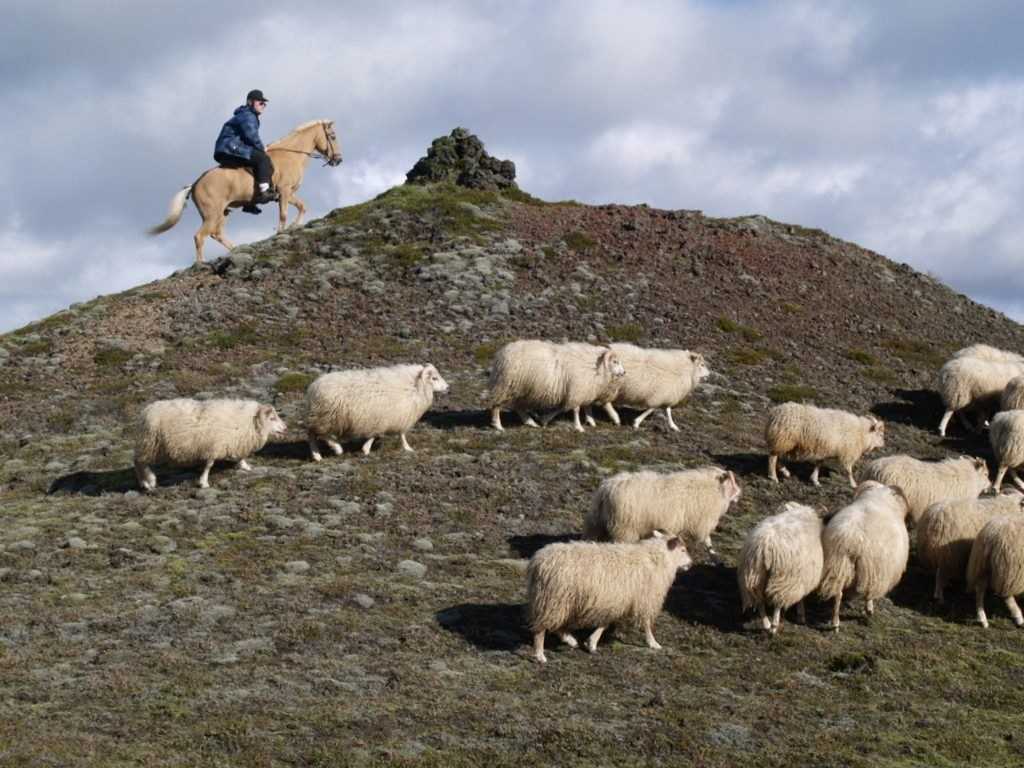 The réttir is a popular event across the country and most Icelanders like to take part in it, be they bureaucrats or bankers, school-children or teachers, sailors or seamstresses. Some travel companies offer foreign travellers the opportunity to participate also. After the sheep have been herded into the correct pens they are divided up. Those destined for the slaughterhouse are removed from the flock. Those destined to live graze on fields on or near the farm, until November, when they are housed for the winter. Sheep used to be sheared before they were released to roam the pastures. Nowadays, most farmers shear them in winter when they are indoors, as this wool fetches a higher price.

A Valuable Resource
Wool was one of the country’s most important exports during the Middle Ages (along with dried fish, known as stock fish). It became the basis of a valuable export industry again in the 20th century.
The fleece of the Icelandic sheep, which varies in colour from white through grey and browns to near black, is made up of two layers. The inner layer of short, fine fibres, called ‘thel’ was used for knitting delicate laces, underwear and baby clothes while the coarser, longer, outer fibres, called ‘tog’ were used for warm and water resistant winter garments. Today the soft spun ‘lopi wool’ is used in traditionally patterned hand knitted sweaters, the most popular souvenirs from Iceland.