The oldest house in Reykjavík

The oldest house in Reykjavík

Aðalstræti 10 by Ingólfstorg is the oldest house in Reykjavík, built in 1762 by Skúli Magnússon (1711-1794), the first Icelandic Treasurer. He has been named the father of Reykjavík. This house was part of the Inntréttingar, eight buildings that housed the first textile workshops of Iceland. When it was built, Reykjavík was only a village. Icelandic society was still based primarily on self-sufficient farming in rural areas. 140 years later, Reykjavík had become the country’s capital.

Now this beautiful and remarkable house has become part of the Reykjavík City Museum, where you can get to know the city’s history and its inhabitants. The house has been inhabited by the Bishop of Iceland, the Director of Health, and the Rector of the Reykjavik Junior College. Merchants Silli and Valdi bought the house in 1926. They operated the country’s first modern grocery store for over half a century. The city of Reykjavík purchased the house at the turn of the 21st century and restored it to its original state. You can glimpse Fógetagarðurinn from Aðalstræti 10, where you will find a statue of Skúli Magnússon by the artist Guðmund Einarsson from Miðdalur. 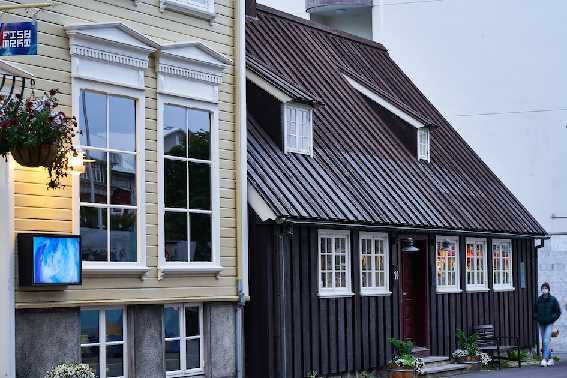 The black house on the right is Aðalstræti 10, the oldest house in Reykjavík built 259 years ago, in 1762