Much has been written about the curious belief that many Icelanders hold: that of the existence elves, trolls and hidden people.

When I arrived in Iceland 7 years ago, I was of the same opinion as most everybody else born outside of Iceland, that elves and fairies were just the stuff of legend, Disney movies and plastic gnomes that were only to be found in the kitschy gardens of old people. 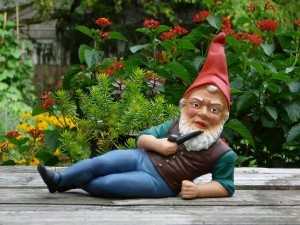 However if you live in Iceland for any length of time, it will be just a matter of time before you are compelled to confront the issue once and for all. You will be forced out of your comfort zone and will demand answers as you come face to face with entirely sober and lucid Icelanders who recount their experiences of the elf phenomenon.  Surveys taken in 1975, 1982, 1985, 1995, 1998 and 2006 reveal that opinions of whether elves exist have not changed very much over the years.  The most recent survey from 2006 found that only 13.5% of the sample population believed that this is all basically a bunch of hooey. With only 8% of the sample unwilling to commit to any opinion either for or against, that leaves 78% of the population as either firm elf believers or at least open to the possibility of their existence.

It is interesting to note that a high proportion of supporters of Framsóknarflokkur (the Progressive Party) do believe in the existence of elves, according to a survey carried out in 1998. Whether this has any bearing on present party platforms is of course another matter.

Is Iceland overrun with elves?

For the first year of my new life in Iceland, I lived on an organic dairy farm in the south of the country. The farmers had bought an old farmstead and eventually there were plans to build a newer and bigger house for themselves and their children. There was a small hillock on the property and the farmer’s wife, Guðný, was convinced that there were ‘little people’, as she called them, living there. Her husband was not convinced however and it was exactly on this spot that he wanted to build the house. “We had a big argument about this which lasted for months, says Guðný. There was no way I was going to allow the builders to destroy the elves’ home and I felt so strongly about it that it almost caused us to divorce. Fortunately, my husband finally relented and we built the house just a few meters away in a place where there are no elves.”

Several years later, I interviewed the owner of one of the largest hotels near Vatnajökull Glacier. She is a school teacher in the nearby town during the winter and she and herfamily run the hotel during the summer. We walked out onto the terrace that overlooks the property and pointing to a secluded area, she confided, “I used to play over there when I was a child. Many elves lived in the rocks there and I remember very distinctly playing with them. It happened many times and I knew full well that they were elves, there was no doubt in my mind.”

Even the Blue Lagoon has an elf story

In the summer of 2014 I did some tourist guiding around the Reykjanes Peninsula where the Blue Lagoon is located. I noticed on the Blue Lagoon’s website that they mention ‘elf involvement’ in the building of the new dining room in 2010. Intrigued, I decided to ask at the front desk for the details of the story. I was told that while they were digging into the lava to prepare the foundations for the new wing, the machinery suddenly came to a complete stop and they could not proceed. It got to the point that they finally had to call in a medium to find out what the problem was. The elves told them, via this medium, that they were upset because they had not been consulted as to the proposed building plans and they would like to inspect the blueprints. The elves asked that the plans be downloaded to a USB stick and put into a box in a certain hole in the wall and they would take a look at the plans and get back to the Blue Lagoon management when they have discussed the matter. After about a week, the medium was called back in to relay the message- the elves had accepted the plans and agreed that construction should continue. Technically savvy, those elves!

If you are in Iceland, or are planning a visit, my best suggestion is that you come with an open mind, and suspend your own beliefs just for the time being. That way, should you happen to run into an Icelander who is convinced of the existence of these beings, your world view will not be entirely shattered and you might even gain a new Icelandic friend. Many Icelanders do take these things seriously!