The lava swelling to the earth’s surface from a crevice in the Ódáðahraun north of Bárðarbunga volcano since middle of August, could by now fill 740 Empire state buildings, or bury a football field at every 5,5 minutes. If the lava continues to flow, the lava spread will be bigger than any volcanic eruption that Iceland has seen in the past two centuries, National Geographic magazine reports.
And nobody knows for how long it will continue –  months or years. Fortunately, the lava field located on the Holuhraun is far away from any human habitation, and so far has only bothered a glacier river. However, thanks to the EU-funded research project FUTUREVOLC  for long-term monitoring European volcanoes, Holuhraun has become the best controlled volcanic eruption in Iceland’s history. 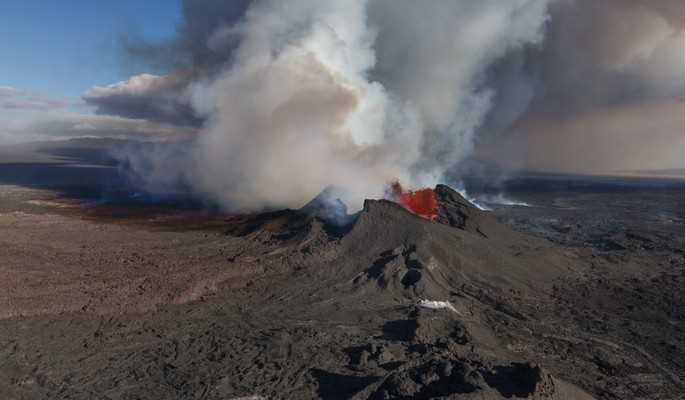 “We have a lot, a lot of data, so much data that we can really see how the eruption is evolving ” says Stephanie Dumont from the Institute of Earth Science at the University of Iceland, who currently is working for FUTUREVOLC. The dense network of monitoring instruments, for example, strengthens the theory that the Holuhraun Lava possibly derives from a deeper, second and far larger magma chamber beneath the volcano Bárðarbunga.

Such a large lava outburst deserves a great name, says volcano scientist Þór Thordarsson. On the website of the Institute of Geoscience he proposes the name Nornahraun, which means witches’ lava.
The eruption site north of Dyngjujökull is, as far as known, the only place in present times where the phenomenon called Nornahár can be observed. It occurs when gases cut the exiting lava into very fine glass fibers. Falling to the ground and twisted by the wind, they resemble human hair. The last time such a phenomenon had been observed at the eruption of Skaftáreldar in 1783, also known as Laki eruption.